Amsonia, a native of Arkansas and Oklahoma, is a member of the Apocynaceae family. The species was named after Leslie Hubricht who first discovered it growing in Arkansas in 1942. 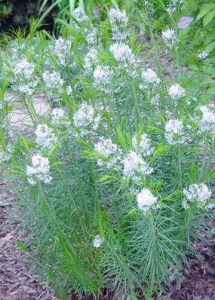 The foliage is finer than a feather duster with leaves reaching three inches long. This amsonia grows 36 inches tall and 36 inches wide in a mounded form. From late spring to early summer, two- to three-inch wide clusters of small, light blue, star-shaped flowers are borne above the ferny foliage. The alternate arranged leaves are bright green in spring and summer, but turn a bright yellow-golden color in fall.

Amsonia hubrichtii grows best in full sun and partial shade and in well-drained soil. Stems tend to open and flop if plants are grown in too much shade. Once well established, this blue star is drought tolerant and can withstand a season of neglect. The foliage and stems contain a milky sap, which seems to make the plant unappealing to deer. No insect or disease pests are known to attack Arkansas blue star and it is very soil-adaptive. It is hardy in zones 4 to 9. 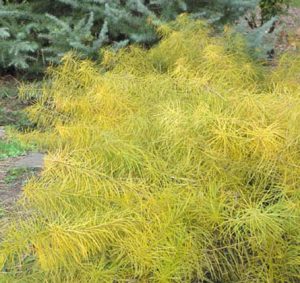 Arkansas blue star is a timeless plant for the garden. The foliage in spring and summer is one of the best for contrast with medium to large perennials or shrubs. This blue star adds a billowy, finely textured feature to the landscape. It grows into a dense mass, very much like a small shrub. The cool blue flowers are useful for toning down adjacent flower colors. Although the delicate light blue spring flowers are the inspiration for its common name, the autumn color of the feathery leaves is a major reason that gardeners grow it. The stunning fall color of the foliage creates an excellent combination with purple coneflower, gayfeather, and ornamental grasses.

Each year since the inception of the Perennial Plant of the Year in 1990, members of the PPA have selected a perennial that is suitable for a wide range of climate types, low maintenance, and multi-seasonal interest.