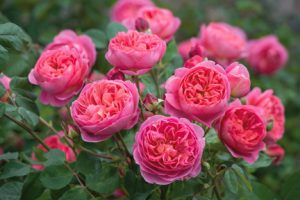 âBoscobelâ bears beautifully formed flowers of a rich salmon coloring that changes with age to a rich, deep pink. They start as red buds which open at first to pretty cups, gradually developing into perfectly formed blooms of classic rosette formation. The numerous small petals are of varying shades, mingling to provide a most pleasing effect. The delightful, medium to strong myrrh fragrance has a hawthorn character with hints of elderflower, pear and almond.
It forms an upright shrub that is healthy and of medium size, with dark green, glossy foliage.
Boscobel House is a beautiful timber-framed house that was built in 1632 and is not far from the David Austin nursery. It is famous for being the place where King Charles II hid in an oak tree whilst being pursued by Cromwellâs soldiers during the English Civil War in 1651.
It grow 3 x 2Â½ feet. (David Austin 2012, Auscousin.)