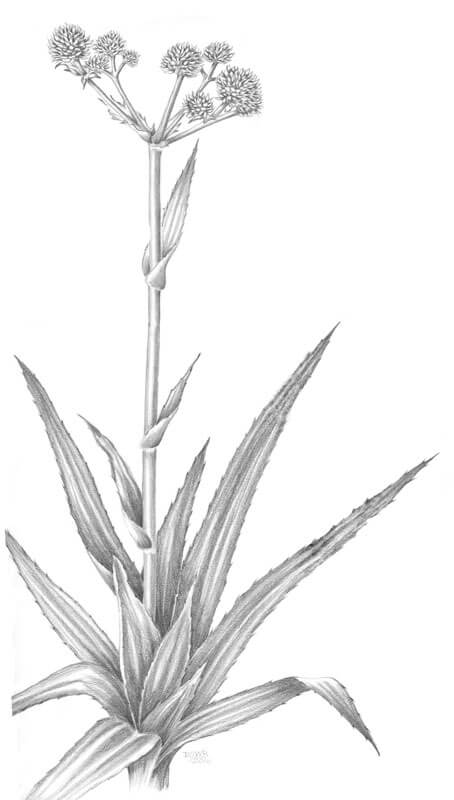 The Northern rattlesnake-master (Eryngium yuccifolium), an unusual prairie species native to the eastern and central United States, has been named the 2016 North Carolina Wildflower of the Year by the North Carolina Botanical Garden (NCBG) and the Garden Club of North Carolina.

With a clump of leathery strap-like, blue green leaves and a single upright flowering stalk, this distinctive plant more closely resembles a yucca than its closest relatives in the carrot family (Apiaceae). Its interesting form and texture make it a good garden plant, and also one that attracts a steady abundance of pollinators.

The common name of this plant comes from early 18th century accounts of Native Americans applying a root preparation to their hands and arms to protect them while handling rattlesnakes and also brewing a root tea to use as rattlesnake antivenom. One of the earliest known uses of the plant dates back 8,000 years, when prehistoric North Americans used the fiber from its thick leaves to make shoes and sandals.

The NCBG and the Garden Club of North Carolina work together to promote the use of native plants in home gardens. Each year since 1982, a native perennial has been chosen and seeds of that wildflower are distributed to interested gardeners. To view a list of the past 34 North Carolina Wildflowers of the Year, visit ncbg.unc.edu/north-carolina-wildflower-of-the-year.