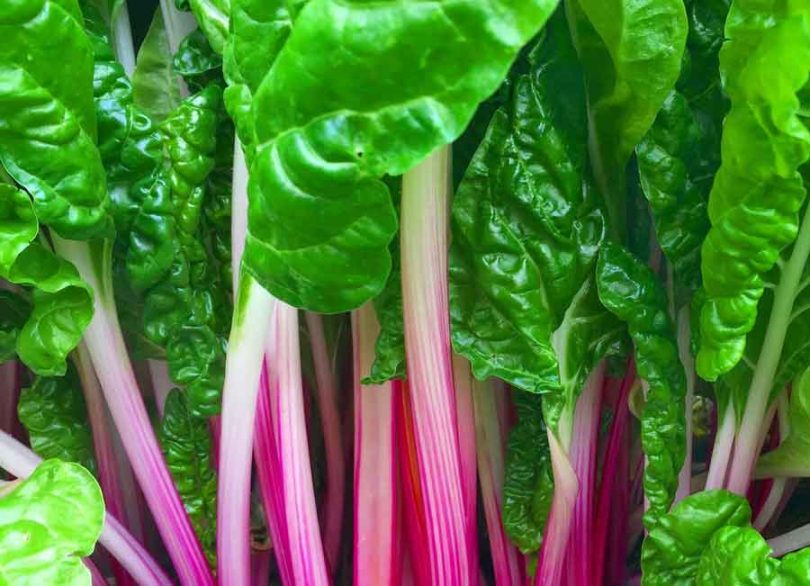 As I celebrate my 20th anniversary of living in the Triangle, I am thrilled to share with you three “must grow” plants in each issue of Triangle Gardener this year. Throughout my career as a designer, propagator, and grower, I have encountered many different varieties. It is my goal to share the very best with all of you, focusing on two key points: high impact and low maintenance. To make your garden extra special and diverse, I will feature a woody, herbaceous, and edible plant, all of which thrive in the central North Carolina climate.

“You smell it before you see it” is the best way to describe this Chinese native deciduous shrub. The fragrant blooms will fill the air with a sweet scent that is impossible to miss. Chimonanthus praecox, also known as winter sweet or Japanese allspice, is a deciduous flowering shrub in the Calycanthaceae family. 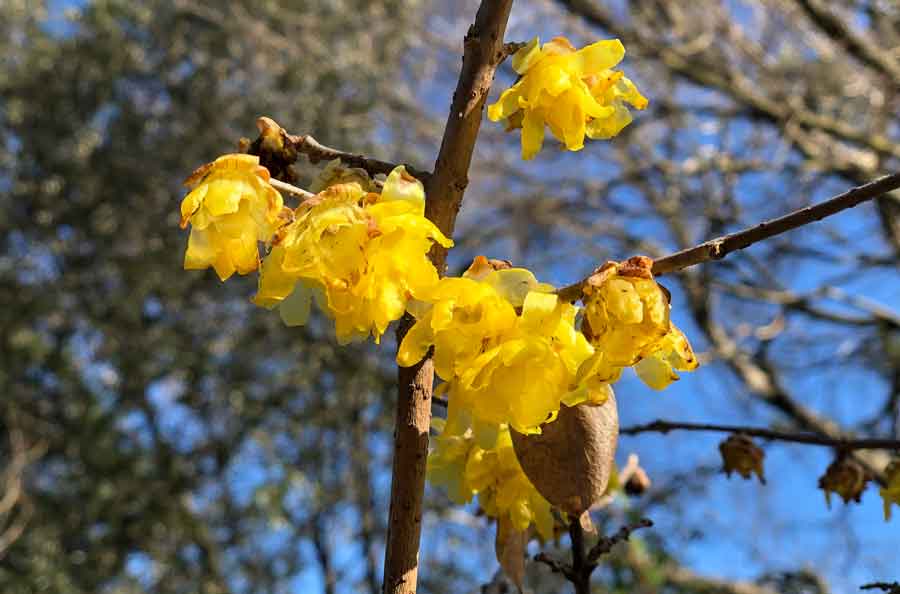 Hardy to zones 7-9, wintersweet is a must have shrub that can be tucked into a back corner of your landscape, meant to be enjoyed for a few weeks in early winter while the branches are covered in the blossoms. This is a vigorous plant, reaching 12 feet-plus tall with an open habit. This is not meant to be pruned into a green round meatball shape, so plant it where it can grow to size so you can enjoy this as a maintenance free specimen. However, the blooming branches are perfect for cut arrangements to bring in and enjoy, so plan to do any necessary pruning when the plant is in flower.

In late fall, the foliage turns a beautiful, butter yellow color before dropping to the ground. A few short weeks later, the strongly scented, pendent flowers will appear on the bare stems. The blooms range in color from pale yellow to brilliant, dark gold with purple and red pigments. If you are particular about the flower color buy it in bloom.

This plant is notoriously difficult to propagate from cuttings. It seems like it should root but they don’t. Most nurseries grow this from seed, hence the flower color variability. Seed grown plants can take many years to flower, like over a decade. If you come across a named cultivar, such as the gorgeous ‘Grandiflorus’ and ‘Luteus’, buy them. They are probably grafted onto seedling rootstock to ensure you get the super showy blooms from the start.

Wintersweet is a very low maintenance plant, once established, which means after 6 to 9 months in the ground you won’t need to water it, unless we are in a severe drought. Site in more sun than shade for best flowering, which generally means 6 to 8 hours of direct light. However, this can be grown along a woodland edge and will bloom even in low light. As for soil prep, like all garden plants, this prefers moist, well-drained soil. My recommendation is to add compost, ground leaves, or other decomposed organic matter to the hole when planting. This will provide the water and nutrient retention needed to get the shrub established.

It is important to note that Chimonanthus is not related to actual allspice, Pimenta dioica. Do not eat this plant. The seeds contain a toxic alkaloid called calycanthine, found in several Calycanthus species. The advantage of this is that animals, like deer, tend to stay away. I never say anything is one hundred percent animal proof but I have never heard of any gardeners complain of their wintersweet being eaten to the ground.

In need of a showy, evergreen plant that will thrive in dry shade and not get eaten by animals? Look no further than the cast iron plant. Aspidistra is a genus of flowering plants now assigned to the Asparagaceae family. They are native to eastern and southeastern Asia, particularly China and Vietnam. 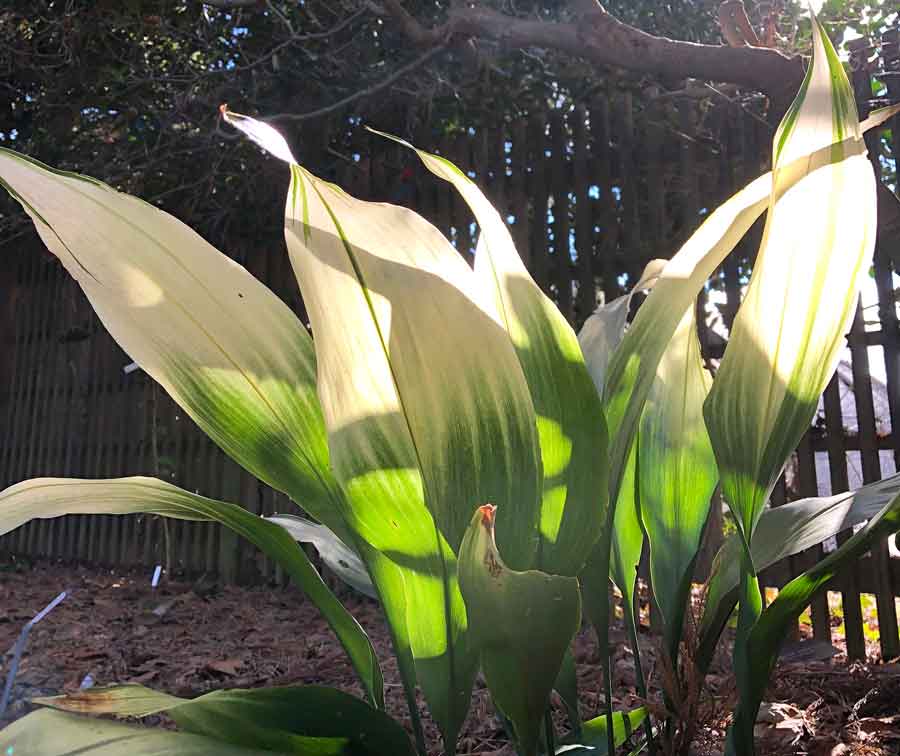 This genus was named by the English botanist John Ker Gawler in 1822. It is a blend of the Greek “aspid” and the genus name Tupistra. It was originally placed in a broadly defined Liliaceae family, before being placed in the families Convallariaceae and Ruscaceae. It wasn’t until 2009 that it finally was assigned to its currently plant family. Sorry, I can’t resist a little nerdy nomenclature information.

Cast Iron plant didn’t get much attention until recent decades when botanical authorities in Asia began to uncover the vast array of species, now identified to be around 100. Aspidistra elatior is the most common species and can be grown as a landscape plant in zones 7-9. It is a popular houseplant that tolerates low light and neglect, especially for people living in colder climates.

I was first introduced to this plant during my internship at Montrose Gardens where they were planted in mass under large oak trees with no supplemental water. They were one of the few plants in the garden that I didn’t have to spray with deer repellent. A few years later, when I was production manager at Plant Delights Nursery, I was introduced to the diversity of this genus, which includes variegated selections, narrow leaf forms, and even dwarf varieties. It is impossible to pick a favorite, but ‘Asahi’, ‘Okame’, and ‘Snow Cap’ are a few that I can’t get enough of for low maintenance, year-round interest.

Generally, Cast Iron plants are considered for their foliage, which is durable and can be used in long lasting cut flower arrangement. But did you know they flower? Aspidistra tonkinensis ‘Hanoi Honey’ is a new introduction that offers an incredible flower display starting in late fall. The white flowers with a deep burgundy throat appear at the base of the plant, so be prepared to get on your knees to enjoy the show. Or grow it in a container to enjoy as a tabletop centerpiece that is sure to capture the attention of visitors.

Plant it in part to full shade to ensure the foliage doesn’t get sunburned. And though Cast Iron plants will tolerate poor soil, they do appreciate moist, well-drained conditions for optimal growth. Though every species and variety will have a different mature size, count on these growing about 2 feet wide and 2 feet tall. From my experience, they do not need fertilizer. In fact, many of the variegated forms will turn all green when given too much nitrogen. Grow these lean and you will be impressed by how capable they are as a hands-off landscape specimen.

Is there an edible more beautiful than the brilliantly colorful Swiss chard? This was the plant that made “foodscaping” an easy sell. Look no further than every garden center in fall where chard is sold next to pansies and snapdragons as a cold hardy, winter interest option. 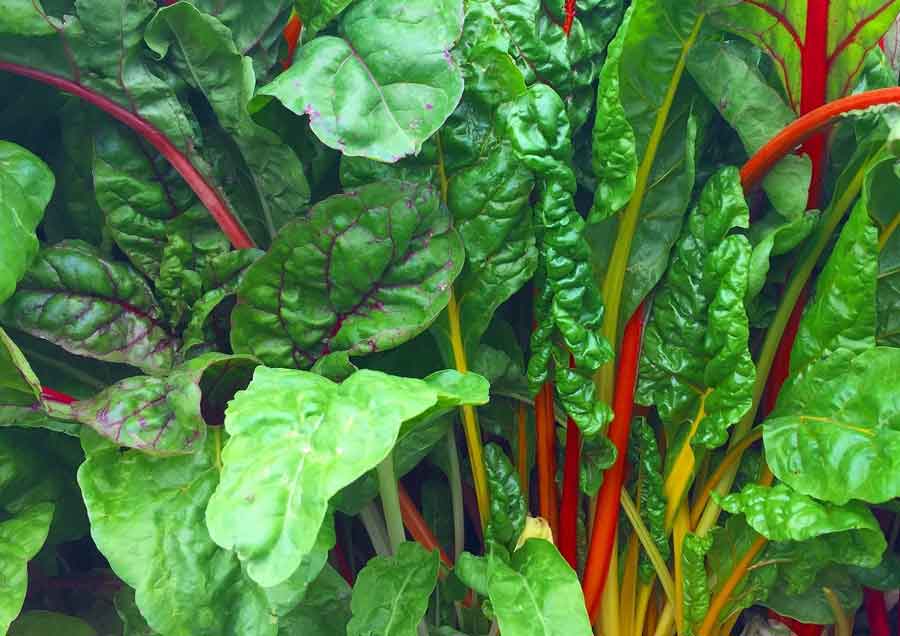 Known botanically as Beta vulgaris subsp. vulgaris, chard has a confusing history with naming. It was first described in 1753 by Linnaeus and is divided into two rank-less cultivar groups: Cicla Group for the leafy spinach beet, and the Flavescens Group for the stalky Swiss chard.

The origin of the adjective “Swiss” is confusing. Chard is not native to Switzerland, as it’s a coastal plant. It is used in traditional Swiss cuisine, namely in a dish called campun, which I’ve never had but plan to make as I have an abundance of colorful foliage destined for the kitchen.

Chard is one of the hardiest leafy greens, with a harvest season typically lasting longer than kale, spinach, or lettuce. I start seed in September and the plants grow all winter into spring in the ground and in containers. Some years it even persists through the summer, though the flavor is quite bitter with warm temperatures.

In addition to being pretty, chard has highly nutritious foliage with a significant concentration of calcium along with vitamin K, magnesium, potassium, manganese, iron, and vitamin E. These are all essential elements needed to maintain good health. It is noted for its many benefits ranging from helping to control diabetes, regulating blood pressure, building stronger bones, reducing the risk of cancer, and improving blood circulation. It is even credited with helping improve your complexion and strengthen hair follicles.

It has been used in cooking for centuries and can be eaten raw, chopped in mixed salads, or cooked as an addition to stir fries and soups. A simple google search will reveal thousands of delicious and nutritious recipes for you to enjoy your homegrown harvest.

Chard has shiny, green, ribbed leaves, and petioles that range from white to yellow to red, depending on the cultivar. And there is no shortage of great varieties to grow, thanks to breeders world-wide and non-profit organizations like the National Gardening Bureau that work to bring the best cultivars to commercial growers and home gardeners.

A few years ago, I had the opportunity to tour the California vegetable trials where chard was a star. A few of my favorites are ‘Fordhook Giant’, as well as red-ribbed forms such as ‘Ruby’ and ‘Rhubarb’. ‘Rainbow’ and ‘Celebration’ are fun seed mixes that have all different colors included. ‘Peppermint’ has white and pink striped coloration to the petioles that look gorgeous all winter long.

Like most vegetables, chard is best grown in full to part sun in moist, well-drained soil. It can be grown in the ground, in raised beds, and even in containers, hanging baskets, and window boxes. If you have never grown or eaten Swiss Chard, let this the be motivation for you to try something new. I promise you won’t be disappointed.

Brie Arthur is an author, horticulturist, and international speaker living in Fuquay-Varina, NC. She has been dubbed a revolutionary for her leadership in the suburban foodscape movement. For more information, visit BrieGrows.com or email Brie@BrieGrows.com.