When planning our gardens we have to consider many factors, including the omnipresence of deer and the consistent lack of summer rain. Keeping these restrictions in mind, here are three drought tolerant, deer resistant plants that aren’t widely used in the Triangle—but should be. 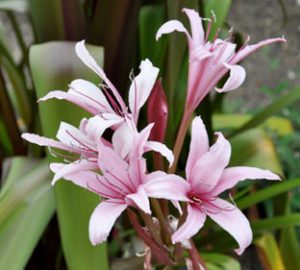 Crinums, mainstays of old Southern gardens, are tough as nails, producing Amaryllis-like flowers year after year with very little care. A member of the Amaryllis family, Crinums thrive on neglect, and after the first year are truly drought resistant. There are a couple of basic rules for growing Crinums successfully:

1) site them in a sunny location that has well-draining soil;

2) think about the site carefully because Crinums resent being moved—often sulking and refusing to bloom for several growing seasons if they should change locations;

3) leave the drooping, wet, soggy leaves in place after the first frost, pruning them back in late February. The bulb increases in size every year and it isn’t unusual to find Crinum bulbs weighing over eighteen pounds. 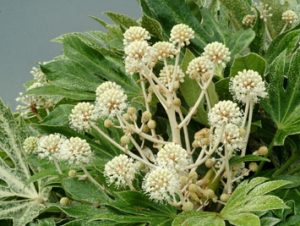 Fatsia japonica grows well in the Triangle. Provided they have some protection from the afternoon sun, Fatsias will do well in a container for two growing seasons, after which they want to be planted in the garden. After transplanting, water them regularly during the first growing season. In October they will produce flowers in the shape of small white balls. In the spring they will shed an alarming number of their lower leaves before putting on new growth. Fear not, this is normal Fatsia behavior. While most Fatsias produce solid green leaves, there are two unusual cultivars available in the Triangle: ‘Spider’s Web’, speckled with gold, and ‘Variegata’ with variegated green and white leaves. 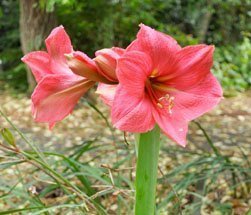 The hardy Amaryllis (Hippeastrum) is a relatively new addition to the Triangle gardening scene. Hippeastrum contains many cultivars—some hardy and some not—that respond to the longer daylight hours of summer. The long-lasting hardy Amaryllis blooms look good placed near Crinums, although their scapes are shorter than those of the forced bulbs we have in our houses at Christmas. The hardy Amaryllis will multiply rather quickly, becoming one of the showier additions in the spring garden. Bulb companies are now starting to offer a selection of hardy Amaryllis in spring catalogues but be warned: they go quickly.

While the Triangle gardener can safely plant Crinums in the fall—provided it’s before October—they need to wait until spring to plant Fatsia japonica and hardy Amaryllis, both of which need a longer establishment time before the cold weather settles in.

Kit Flynn is a Durham Master Gardener and a member of the Advisory Committee of the Durham Garden Forum.