American natives, agaves are sometimes confused with aloes, an unrelated genus from Africa. Although agaves are succulents, they’re not cacti. Instead, they are members of the Asparagaceae family, along with hostas. If you see an agave in flower, the asparagus connection becomes clear.

Agaves sometimes go by the name century plant. Western lore had it that it took an agave a hundred years to bloom, after which it died. In the rainy east, flowering occurs after only ten to fifteen years, which is the good news. The bad news: the plant still dies after flowering. But even without flowers, agaves bring a bold sculptural quality to the garden. 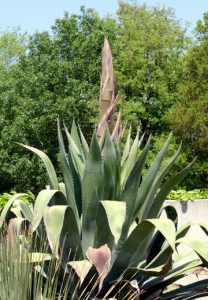 All agaves—and there are about 200 species—have a central rosette of leaves and little or no trunk. The leaves almost always have a sharp terminal spine, as well as varying numbers of spines on the edge.  Leaves can range from elongated and needle-like to broad and ovoid, and color goes from olive-green to a glaucous blue-gray. And although we associate agaves with scorching deserts of the Southwest, there are a few that can be grown here. Picking the right plant and the right site is the key to success. 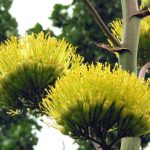 For any agave, excellent drainage is generally vital to survival.  They can take extra water in the summer when they are growing, but really don’t like it in winter. If you are one of the few with sandy soil, you’re in pretty good shape. If you have clay, amend your soil with PermaTill or a similar product at a one-to-one ratio. Planting on a slope or berm is best; mulch with gravel or rocks, not organic matter. Agaves are happiest with full sun, but also seem to do okay with light shade. They should not be planted past mid-summer to allow establishment before winter. 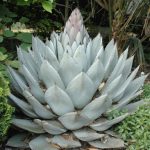 Several hardy agave species and varieties can be seen at the JC Raulston Arboretum; they’re concentrated in the Xeric, Scree and Rooftop gardens. Agave salmiana is on the north side of the roof and sent up a spectacular flower stalk last year. Although the mother plant died, there are many offsets, or pups, that live on just underneath. At the east end of the roof near the wall you’ll find Agave parryii, barrel agave, with its blue-green leaves and burgundy spines.

Descending the steps to the Scree Garden you’ll see a fine example of Agave ovatifolia nicely mixed in with Texas sage (Salvia greggii); it’s on the west side near the lawn. This species has proven to be one of the best for relatively cold, wet winters.

Heading down the steps into the Xeric garden, go toward the large holly hedge and you’ll find a patch of Agave lophantha. This olive-green species offsets more than most and will quickly form a broad, prickly mass, a good choice if you need to cover a sunny slope.

When you’re at the JCRA this summer, don’t miss the Agave scabra located near the path between the Visitor Center and the McSwain Education building; it just shot up a twelve-foot “hat rack” stalk as it flowers itself into eternity.