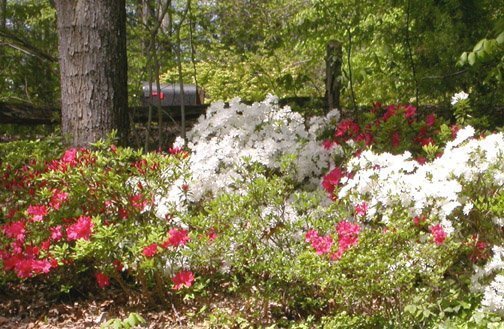 One way to spell spring in the Triangle is azalea. While daffodils tease us that spring is on its way, clouds of azalea blossoms herald spring’s definite arrival. With blossom colors ranging from the purest of whites to pink and purple shades to the most brilliant reds, azaleas herald the start of spring.

For those wanting to add azaleas in your yard, there is good news. Just a few helpful tips will go a long way in keeping your azaleas happy and healthy. If planted correctly, you can enjoy your blooms without continual maintenance issues. 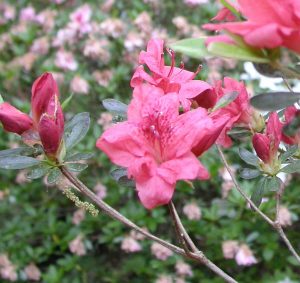 Azaleas can handle sun, but prefer a cool, partially shaded area such as under pines or in an area where the trees have been limbed up to allow filtered sun. You would probably have an unhappy azalea if you plant it on the sunny south side of your home where it would receive reflective heat from the house and blazing heat from the summer sun.

Technically, azaleas prefer an acid, well-drained soil with lots of organic matter such as compost or decayed pine bark. Typical clay soils of the Triangle area are acidic by nature but not well-draining. Digging a hole in the clay simply makes an underground container, which will hold your azalea and enough water to either drown it or rot the root ball, leaving you with a dead plant.

The best way to plant azaleas is to make a shallow bowl-type indention about three inches deep at its center, tapering up to ground level around the edges and about three times the size of your azalea’s root ball. Make a mixture with the soil removed from the bowl-shaped hole, compost and additional soil.

Remove the azalea from its pot or burlap wrap. Check to see if it is root bound (meaning the roots have been growing in the container too long and are matted and hard.) Loosen and spread out the roots – no need to be timid about this process. Place the azalea in the center of the hole and spread the soil/compost mixture around the azalea, bringing the level of the soil up to the same height as it was when the azalea was in the pot. Water thoroughly, but don’t drown the plant. Azaleas should be watered regularly during the first year to help establish the root system. They will also appreciate a good watering during the hot summer months.

Azaleas love to be mulched and pine needles are an excellent material for this. The mulch helps hold in the moisture during dry periods, moderates the soil’s temperature, discourages weeds, and decomposes to add organic materials that will keep the soil acidic. 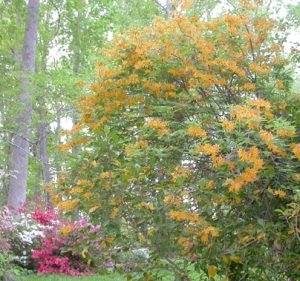 If you already have azaleas, wait until the bloom season has finished before pruning, but finish the task before the Fourth of July. Pruning in late summer, fall or winter destroys developing buds, which produce next year’s blooms. Dead or injured branches can be removed at any time of year.

Fertilizing azaleas is best done as the blooms open on the plants. Azaleas do not need much fertilizer if mulched with an organic material. Late fertilization encourages new growth that will not have time to develop and harden before frosts and winter freezes. There are specially formulated fertilizers for azaleas, but you can also use a balanced mixture such as 10-10-10. Be careful not to use too much as this may burn the roots. To avoid over-fertilization, you might want to put on multiple light applications. Read the instructions on the fertilizer or check with your local garden center for the proper amounts.

—
Marcy Hege gardens in the shade and clay in southern Wake County. An active member of the Raleigh Garden Club and Gardeners of Wake County, she is working on her credentials to become an accredited Flower Show Judge.