Gardeners who are pleasantly amazed by the seemingly magical reemergence of their red spider lilies (Lycoris radiata) in the late summer and early fall garden might also be surprised that this beauty from the Orient has a strong North Carolina connection. It was first introduced to the United States by Captain William Roberts, who brought a few dried bulbs back with him to his New Bern home after he sailed on Commodore Matthew Perry’s famous mission to open up Japan’s trade routes in 1854. 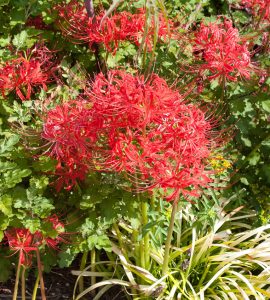 For backyard growers unfamiliar with this attractive plant, take note: it has a weird growing habit. How weird, you ask? The strap-like leaves emerge in the fall and persist through the winter, but then they die down in the spring, leaving nothing to see. However, in the heat of late summer, 18 to 24-inch (or taller) spikes bearing brilliant crimson, spider-like blooms miraculously spring up from the baked earth to put on a show that can last up to two weeks. After the flowers finish their dazzling displays, the stalks fade and fall to the ground, which is followed by the long leaves rising again to start the odd cycle once more.

Red spider lily bulbs are best planted in the fall, meaning now is a good time to get ’em in the ground. Spacing should be about 8 to 10 inches apart in a sunny to lightly shaded area that has well-draining soil. Settle the base of the bulbs about 4 to 6 inches deep in the ground. Adding a little time-release bulb fertilizer at planting time will give the new plants a jump start into next year. Finish the planting with a layer of mulch, and maintain this organic covering even through the winter.

Red spider lilies are tolerant of dry conditions in the summer because that is their dormant time, but they will do better if, during extended droughts, their planting bed is at least watered occasionally. When actively growing, they should, of course, be watered if the rains don’t come.

In a planting site to their liking, deer-resistant red spider lilies will naturalize. However, to keep them from becoming overcrowded, which could lead to diminished bloom production, they should be divided every few years. This is best done in the early summer when the plants are dormant.

And after dividing, don’t worry about having leftover bulbs—although red spider lilies originated from the Far East, they have been a favorite pass-along plant in the South since the 1800s. Any that you give away to other gardeners will not only perpetuate this friendly tradition, but it will continue to prove that Captain William Roberts had a real eye for pretty plants!

Byline:
L.A. Jackson is the former editor of Carolina Gardener Magazine. If you would like to ask L.A. a question about your garden, contact him at: lajackson1@gmail.com.