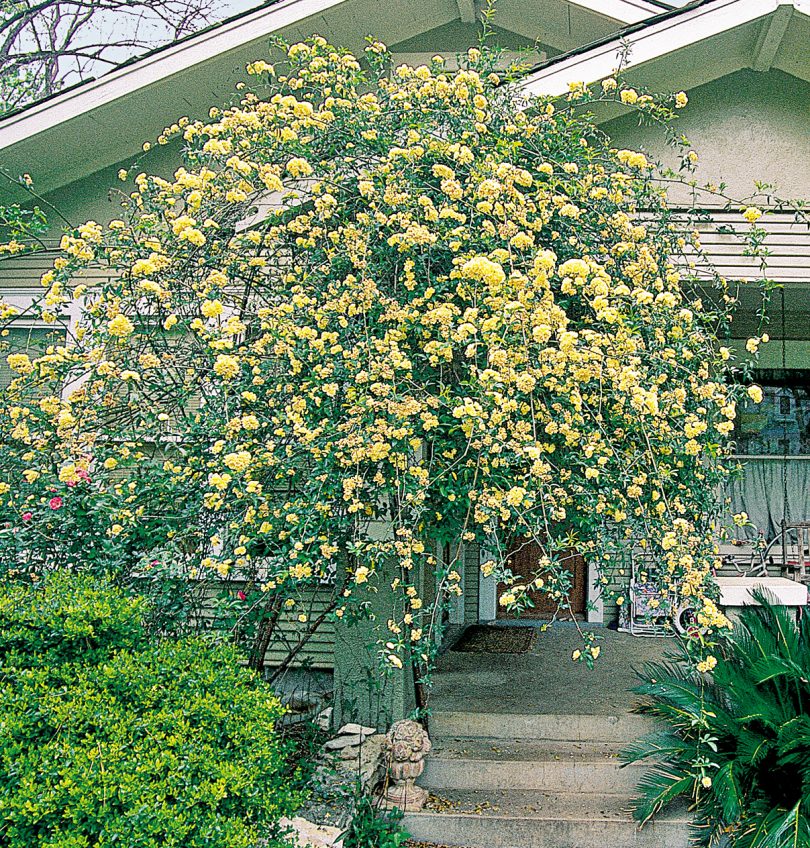 Recently a reader commented that while she enjoyed my articles, she didn’t always agree with me: This was music to my ears. Gardening is hard work and to do it properly, one should have definite opinions. If nature wanted gardening to be easy, she would not be constantly working against us.

All this leads me to my firmly held belief that the roses in our gardens need to be grown on their own roots. Most roses that you will encounter are grafted creatures, creations that in my opinion never will live up to their potential. Now before you puff up your feathers, please hear me out.

Those roses that arose on their own, the ones we call species roses, are always displayed on their own roots. Buy a Lady Banks rose and you’ll have an own-root rose.

However, roses are promiscuous creatures, partially because of nature and partially because of man’s tinkering with them throughout the centuries. Today there are thousands of varieties of roses. Hybridizers, in their search for new creations, have always bred for a particular characteristic.

The first hybrid tea, ‘La France’ appeared in 1867, a date that demarcates the line between old garden roses and modern roses. The 20th century was the high mark for the hybrid teas, which became so hybridized that most of them could not stay alive without extensive spraying every ten days. Not only did many of these roses lack any scent, some were so weak that they could not survive if grown on their own roots.

Today, even with the growth of the sustainable rose industry, many commercial nurseries carry a preponderance of grafted roses. Now the primary advantage of grafted roses for the grower is this: The roses get a head start by growing on an aggressive root system—and the buying season for roses is relatively short, six weeks in the spring and perhaps four weeks in the fall.

I sympathize with growers but the advantages of purchasing own-root roses versus grafted roses are significant: (1) Own-root roses are slower to take off but will quickly reach the size of grafted roses; (2) The join at the bottom of the primary cane where the graft has occurred is a weak point, as all canes of the desired rose must appear above the join and the canes arising from the roots are those of a different rose. Own-root roses have a bowl-like shape at the bottom of the shrub with many canes coming out of the root system; (3) Rose mosaic disease is only spread through the contaminated root system of a grafted rose. Buy an own-root rose, and this is one less thing you have to worry about; and (4) Own-root roses live longer than their grafted partners.

Now this doesn’t mean I don’t pine occasionally for a grafted rose. David Austin several years ago presented the world with a beautiful rose named after his granddaughter, ‘Olivia Rose Austin’. It’s the most disease free rose he offers—a charming pink of medium size. I want this rose but, alas, it’s only offered as a grafted one.

I understand why he’s offering it as a grafted rose and I cannot begrudge him this: He wants to get as many specimens out to the market as quickly as he can. When the demand dies down, he will (hopefully) offer it as an own-root rose. And, I, showing incredible restraint, a characteristic notably lacking in my makeup, am determined to wait for that moment.