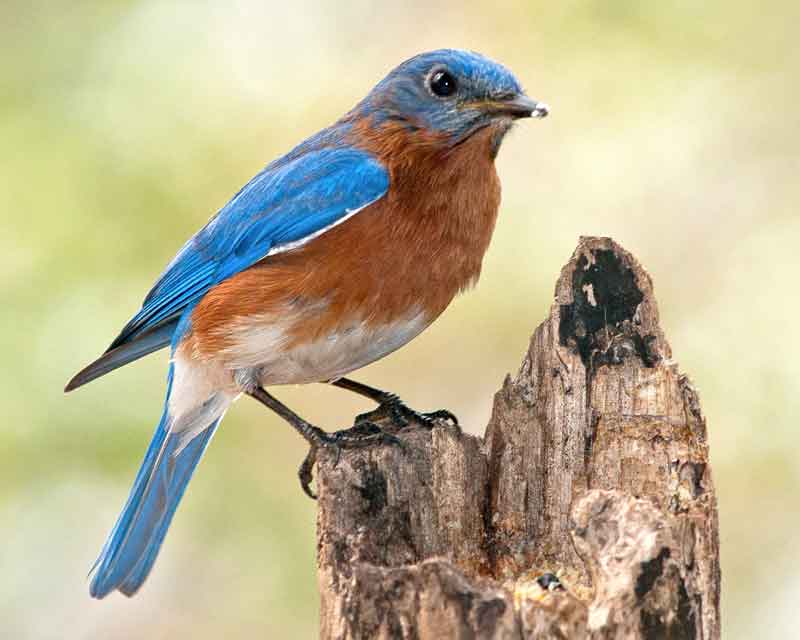 Where have all the bluebirds gone? Did you know there was a time when the bluebird was as common as the American Robin? The loss of natural cavity nesting sites, as well as competition for these sites from non-native house sparrows and starlings, along with indiscriminate use of pesticides, has caused the loss of 90% of the bluebird population.

The bluebird population has begun to recover through initiatives from the North American Bluebird Society and local activists like you and me helping communities build bluebird trails and hosting bluebird nesting boxes in our gardens. This is the good news. But remember, success in conservation efforts doesn’t give us a pass going forward. We need to keep up the momentum.

What You Can Do to Help Bluebirds


If you don’t already have a bluebird nesting box on your property, it’s time to add one. Bluebirds are cavity dwellers, making them the perfect candidate for a nesting box. And it’s never too soon to put one up.

Bluebirds begin to look for nesting sites sooner than they’ll actually use it. Very territorial, bluebirds like to locate early to ensure they find good digs.

It may take a male bluebird several days and sometimes weeks to find a suitable nesting site. Then it may take weeks before the building nest building begins. In our area of North Carolina, we can see the bluebirds begin looking for a nesting site as early as February. Are you ready?

Ideally, Eastern bluebirds don’t want neighbors within 100 yards, minimum. Even better is 125 to 150 yards, but most of us don’t have that much open space.

Face the entrance of the nesting box into an open-spaced area, not tucked away. Bluebirds need to clearly see what’s in front of them, so they can swoop right in.

Smooth round pipe is the best and simplest mounting system to use. One inch PVC piping works well, but any smooth scrap round pipe will also work.

Avoid mounting bluebird boxes on fence-line or trees where climbing mammals or snakes are present.

It normally takes five to six days for the bluebird to build the nest. The making of a nest is timed to be ready four to five days before the female bluebird lays her first egg.

One egg is laid each day until a clutch of three to six eggs is laid – with an average of four or five pale blue eggs in the nest.

The incubation period is 14 days, and the brood will stay in the nest for seven to 18 days. Bluebirds will typically raise between two and three broods each year, and they’ll often re-use old nests. In fact, some research indicates they’re more likely to nest in a box with an existing nest.

It is important to check on the brood’s progress. When approaching a bluebird nesting box, stand to the side, knock to see if mama is home; if she doesn’t fly out then she’s out getting food. These boxes are designed for such inspections. Check that all is well or if the brood fledged.

Food for These Birds


Bluebirds are insect eaters and will hang around your garden even more if mealworms are available. During the spring, summer, and fall, there should be plenty of insects to feed the bluebirds. During the winter, bluebirds will eat berries.

Since insects are a bluebird’s primary source of food during the spring, summer, and fall, you can imagine we at Bee Better Naturally don’t spray pesticides, which will kill their food source. Remember, any broad-spectrum pesticides, chemical or organic, will kill good bugs and garden pests, as well.

Make this your year for bluebirds. They will stick around once they call your garden home.