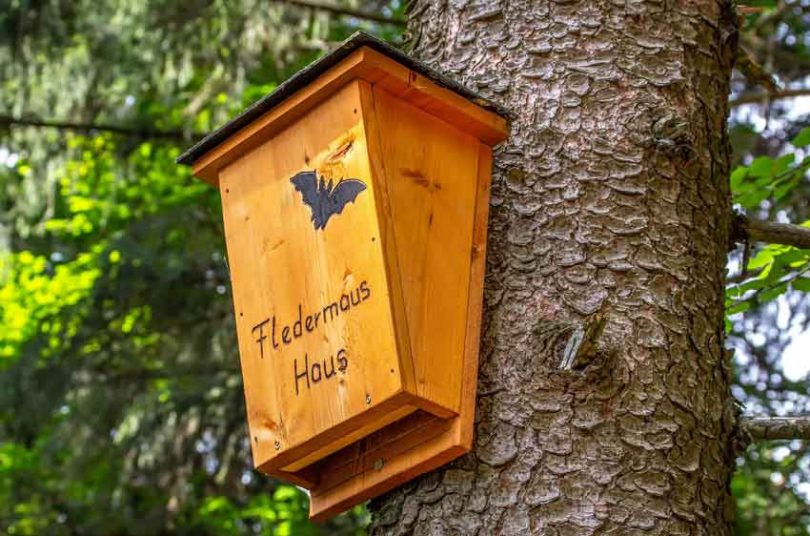 Bats have long been feared and misunderstood animals. Although believed to be evil and dangerous, bats are a beneficial species for the garden.

One of the area’s most common bats, the Big Brown Bat, eats enormous amounts of destructive insects, including mosquitoes. Contrary to popular belief, bats are non-aggressive. Yes, bats do carry rabies, but the incidence of this disease is extremely low.

Bats hibernate during the winter and return to this area after the weather warms sufficiently for them to begin to breed and spend the spring and summer raising their young. The young are born in late May or early June, often in attics of buildings and other dark and warm locations. The baby bats are nursed in their roost and left there in the evenings while their mothers fly out to feed. At three to four weeks of age, the baby bats are ready to leave their roost for their first flights. The Big Brown Bat can live as long as eighteen years.

Many bats are now in danger of extinction due to extermination and loss of important bat habitats. One of the biggest threats to the bat population is white-nose syndrome, a disease that has killed hundreds of thousands of bats in the Eastern United States. It has been reported that this disease has been discovered in bats in North Carolina.

Bats are legally protected as non-game animals and cannot be injured or killed without a special permit. Bats found in your attic or buildings can be humanely removed without lethal means by reputable local wildlife agents.

Because bats are so beneficial, it is important to have natural and artificial bat roosts or boxes to attract bats to your yard. Bat houses can be constructed or purchased and will house as many as 350 to 500 bats in a single unit. The units should be placed in the warmest area of the yard, usually facing south and at least 20 feet high. Sides of tall structures and tall trees serve as the best location. The units can be baited with bat dung to insure attraction to this new home.

Saving our valuable bat population helps them to continue their contribution to the natural eradication of insects and mosquitoes in our backyards.