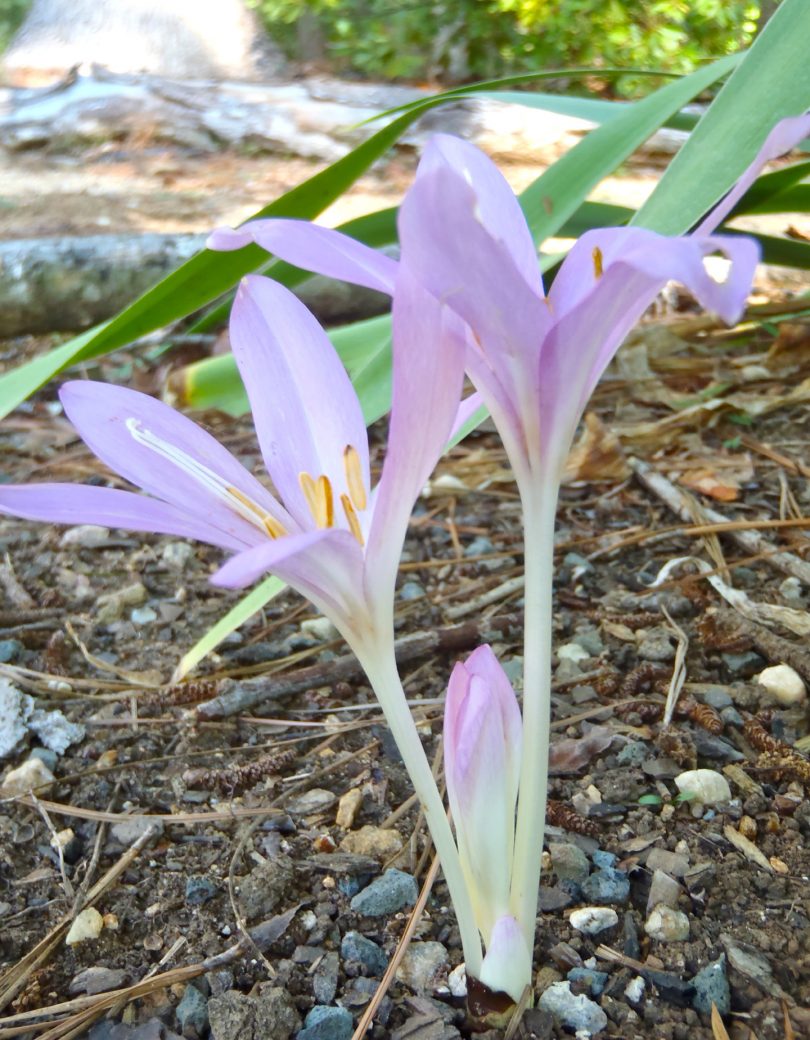 Spring blooming bulbs like crocus and daffodils emerge in the midst of winter sparking hopes for the end of cold weather and the beginning of a new growing season. Although less well known and generally underused in today’s gardens, fall-blooming bulbs also signal renewal. They have been refreshing Southern gardens fatigued by summer’s heat for centuries. 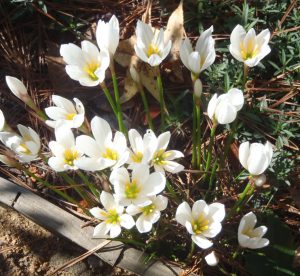 Leading the fall revival is the white rain lily (Zephyranthes candida). White rain lilies are among the most hardy and reliable of the species. Glossy and evergreen, their grass-like foliage makes them ideal for edging paths and walkways. They are most prolific in a sunny and damp spot, but will grow in moist to dry conditions, flowering in sun or bright shade. Rain lilies rarely need dividing and bloom most profusely when a bit crowded.

Most rain lilies, also called fairy lilies, bloom after late-summer rainfalls and continue flowering into fall. The delicate quality of these low-growing flowers and their seemingly magical connection to rain give rise to their common names. Native to the southwestern United States, Mexico, and South America, rain lilies have been grown and passed along by Southern gardeners since the 1800s. 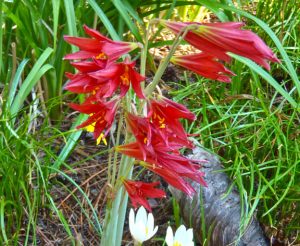 Soon after the white rain lilies begin flowering, dramatic oxblood lilies (Rhodophiala bifida) start popping up. The flowers, deeply red as their name implies, are borne on tall, bright-green stems. Strappy leaves follow the flowers and persist throughout the winter.

Oxblood lilies’ toughness and self-sufficiency is confirmed by Southern bulb expert Scott Ogden who describes drifts of them blooming and thriving on long-abandoned Texas homesteads. Although the plant’s ancestors likely came from South America, Ogden believes the common oxblood lily was selected and distributed by Peter Henry Oberwetter, a German immigrant and gardener who collected and traded plants in central Texas during the 1800s.

Two species of surprise lilies (Lycoris) carry the show though September. Called surprise lilies because their flowers emerge when no leaves are present, these rain lily cousins also inspire multiple common names. Because they flower during hurricane months, both species are sometimes referred to as hurricane lilies. The structure of their elegant blooms gives rise to their most widely used common name—spider lilies. Because the long-stemmed flowers hold well, they make excellent cut flowers. 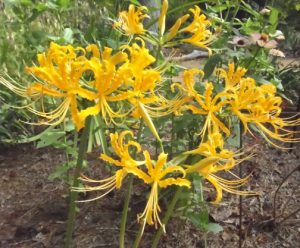 Although the flowers are not quite so large or tall as the golden spider lilies, the blue-green, somewhat arching foliage of red spider lilies remains attractive through spring before disappearing in early summer. Unlike the species that grows wild in Japan, the red spider lily does not reproduce by seed. Fortunately, the bulbs multiply vigorously. 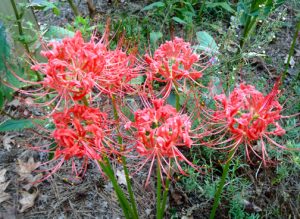 Texas may take credit for the oxblood lily, but North Carolina lays claim to the red spider lily. It’s widely told that the red spider lilies common throughout the South before World War II all descended from three bulbs brought from Japan in 1854 by Captain William Roberts, who then gave them to his sister-in-law, Lavinia Cole Roberts, an accomplished gardener in New Bern. The city’s riverfront features a red spider lily sculpture commemorating its origin there. 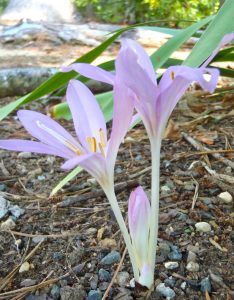 The final, and most magical, bulbs are the colchicums (Colchicum autumnale). Also known as meadow saffron, these fragile, lavender flowers, narrow at the base and lacking stems, pop directly from the ground. Some weeks later colchicums put on a second show when lush rosettes of foliage emerge to persist through late spring. Colchicine, a powerful substance used both for medicine and plant hybridization, is derived from these delicate beauties.

As if being beautiful, but undemanding isn’t enough to offer, all of these fall-blooming bulbs are resistant to rodents and deer. We owe a great debt to those gardeners who saw the potential in these bulbs, who nurtured and propagated enough to share, and who generously “passed them along.”

Growing Tips
All of these wonderful fall-blooming bulbs are adaptable and easy to grow. Rain Lilies, Oxblood Lilies, and both the Red and Golden Spider Lilies will grow in a range of conditions from full sun to light shade. Colchicums prefer partial shade.

Rain lilies are frequently sold as potted perennials at nurseries and garden centers because dried bulbs may take a year off before blooming. Oxblood and Spider lilies are generally available from bulb dealers and as potted plants from some specialty nurseries. Fall is an excellent time to plant either bulbs or potted plants. Colchicums are typically sold as bulbs and must be planted in early fall.