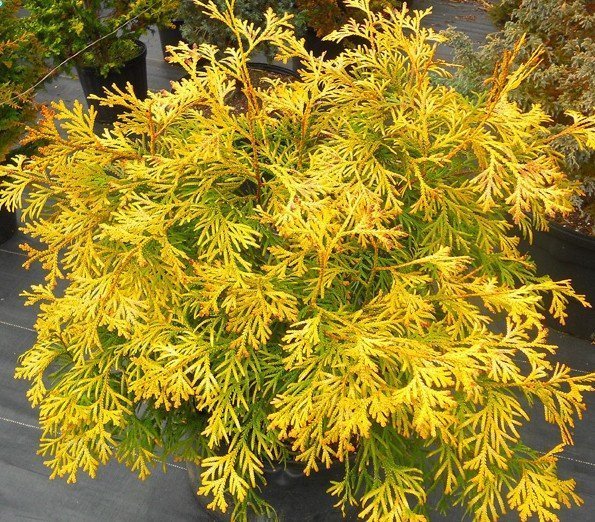 Many conifers do best in full sun and there are a few that require shade, so what are the choices if you have half-day sun and half-day shade and want to plant a conifer?

The Elkhorn arborvitae, sometimes called Hiba cedar (Thujopsis dolabrata), is a tree that will perform well in half-day shade or even all day dappled shade in our region. However, it does require adequate soil moisture to do its best. This does not mean that it will grow in swampy, waterlogged soils but rather, that it does not perform well in drought conditions. Protection from drying winter winds is also a consideration in site placement.

The Elkhorn arborvitae is an uncommon tree in the landscape and it is visually interesting as most people have not seen it before. It is a particularly handsome tree with clean fresh green foliage. The overall tree becomes an elegant, dense pyramidal form, eventually growing up to 30 feet or more in our area. In Japan, where it is native, it can reach 90 feet or more and is planted in gardens and near temples.

The foliage is reminiscent of arborvitae but everything about it is over stated. The stomata (the leaf structures that are responsible for the exchange of gasses, that is, the intake of carbon dioxide and the release of oxygen that we breathe) are easily noticed on the backsides of the foliage and look like silver bands. If you enjoy making floral arrangements you will find using cuts of its foliage particularly beautiful and long lasting.

Sometimes common names like ‘arborvitae’ can be misleading as plants with quite different characteristics can share a name as in this example. When so many gardeners are facing heavy deer pressure, finding plants that deer avoid becomes a major consideration. Since the trees tend to be quite stout and full, bucks don’t often choose Elkhorn during pre-rut when they are staking out their territory and rub their antlers and heads on exposed trunks and branches.

If you do not have space for a large evergreen tree, consider one of the dwarf forms. There are several different cultivars with the same name ‘nana’. A popular form grows to about three to four feet high by six to eight feet wide. It could be used in the transition zone between a turf area and the woods.

In addition, there is a beautiful yellow form (Thujopsis dolabrata ‘Aurea’) that is bright yellow if grown in full sun and a pleasing gold if grown with more shade. The yellow form will eventually become a tree but tends to remain a large bush type element for many years. Finally, there is a variegated form (Thujopsis dolabrata ‘Variagata’), but this form tends to lose the white variegation as the plant matures.

The Elkhorn arborvitae does not suffer any particular insect problems; one more reason to consider using this uncommon conifer in your landscape either as part of a screen or even a specimen tree for a larger property.

John Monroe is the owner of Architectural Trees in Bahama a specialty nursery with a focus on conifers, Japanese maples and other interesting woody plants.