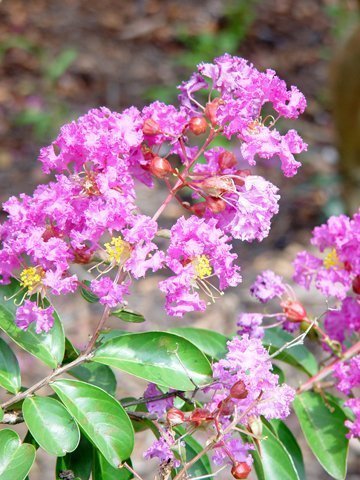 Recently I have been focusing on crapemyrtles. I admire their profuse blooms in the middle of the hottest summer but most of all I love their smooth, exfoliating, creamy-gray trunks, which delight me throughout the winter. A correctly planted crapemyrtle is a thing of beauty—and rarely attained. There is a lovely one, a small tree, planted squarely in the yard of the Urgent Care building on the corner of Estes Drive and Franklin Street in Chapel Hill.

Before we get to my list of dealing with crapemyrtles, we have to discuss its name and spelling. Michael Dirr refers to “crapemyrtles” in his 1998 Manual of Woody Landscape Plants while many Southerners spell it “crepe myrtle” because of its crinkly leaves. A third source cites “crape myrtle.” Most university horticulturalists have followed Dirr’s lead and use “crapemyrtle,” although no one has informed SpellCheck. The argument horticulturalists use is that it should be “crapemyrtle” because it’s not a myrtle, just as a horsechestnut isn’t a chestnut and the mayapple isn’t an apple. 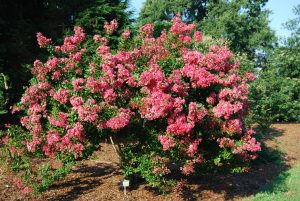 Crapemyrtles (Lagerstroemia indica) came to Charleston around 1786 via England where they were unhappy due to a lack of sun and humidity. Soon it became the most popular tree in the South, which provided it with the heat, humidity, and drought that it relished. But Lagerstroemia indica had one problem: it was susceptible to powdery mildew.

The genus Lagerstroemia originated in southern China, Japan, Korea, and Australia. L. speciosa (queen’s crapemyrtle) is best in zone 10 and is pretty much limited to southern Florida in this country. L. fauriei, L. subcostata, and L. limii were used in breeding programs to influence bloom color, disease tolerance, and bark characteristics, with the most important one being L. fauriei.

L. fauriei appeared in the U.S. from Japan in 1950. Because it’s a bit hardier than L. indica, it is used in zone 6. It isn’t as showy as L. indica but—and this is a huge but—it is resistant to powdery mildew. By crossing these two, The National Arboretum in Washington, DC has produced hybrids that display excellent resistance to powdery mildew. All the hybrids from this program have given birth to cultivars that bear Native American tribe names. The original hybrids appeared in the late 1960s; from these hybrids two famous cultivars, ‘Natchez’ and ‘Muskogee’ came to the market in 1978.

There are now four primary sizes of this hybrid: (1) dwarf—relatively new, refers to any crapemyrtle under five feet tall; (2) semi-dwarf—those between 5-12 feet in height; (3) intermediate—those between 13-20 feet; and (4) tree-type—23-33 feet high. Flower color ranges from white to dark red with many gradations in between. Provided you have sun, there is a crapemyrtle for everyone.

Most of the L. fauriei hybrids and cultivars have exfoliating bark, adding to year-round interest. Exfoliation occurs in the mid-summer, revealing the new bark underneath. The bark colors range from cream to a dark cinnamon; in the late winter the bark will turn grey in preparation for the summer exfoliation.

Not every crapemyrtle should have multiple trunks. If growing a small tree, it is advisable to remove the smallest stems, leaving either one main stem or three to five main stems, depending upon the ultimate size of the tree and your preference.

And I now give you my opinions on caring for crapemyrtles.

Crapemyrtles need to develop in all directions—360 degrees—so they should not be planted against another object, whether it is a structure, a telephone pole, or an-other tree. Provide enough room so they can expand symmetrically in all directions. Overhead wires and crapemyrtles do not mix. That pathetic median between the sidewalk and the street is not an appropriate place for a crapemyrtle.

Crapemyrtles need 6-8 hours of sun; they are not an understory tree like our native dogwood. A failure to bloom is usually due to a lack of sufficient sun.

Crapemyrtles need well-draining soil. They require little fertilization, love our clay soil, and once established are drought tolerant. What more could you ask for?

There is an amazing array of sizes and shapes of crapemyrtles. Provided you have the sun and the expansion room, there is a crapemyrtle for everyone. Therefore, there is no excuse planting ‘Natchez’ when you only have room for a semi-dwarf crapemyrtle. There is a wonderful chart in chapter six of this book displaying the characteristics of many cultivars, including the height: www.clemson.edu/extension/horticulture/nursery/ipm/ipm_book.html .

Crape murder: in one word, don’t. Plant the right cultivar in the right place and enjoy its symmetry. If you must prune, limit yourself to cutting off the root suckers and the seedpods. Topping crapemyrtles gives you a tree that looks as though it has leprosy. The slender sprigs growing out of the huge gnarls sink under the weight of the flowers. Every summer a leprous crapemyrtle looks as though it is weeping. I often think of Niobe who still weeps for her seven sons and seven daughters even though she is transformed into stone. Yes, I’m being melodramatic but how many trees bring forth an image of Niobe?

—
A serious gardener for the past twenty years, Kit Flynn resides in Chapel Hill. She is also a Durham Master Gardener.