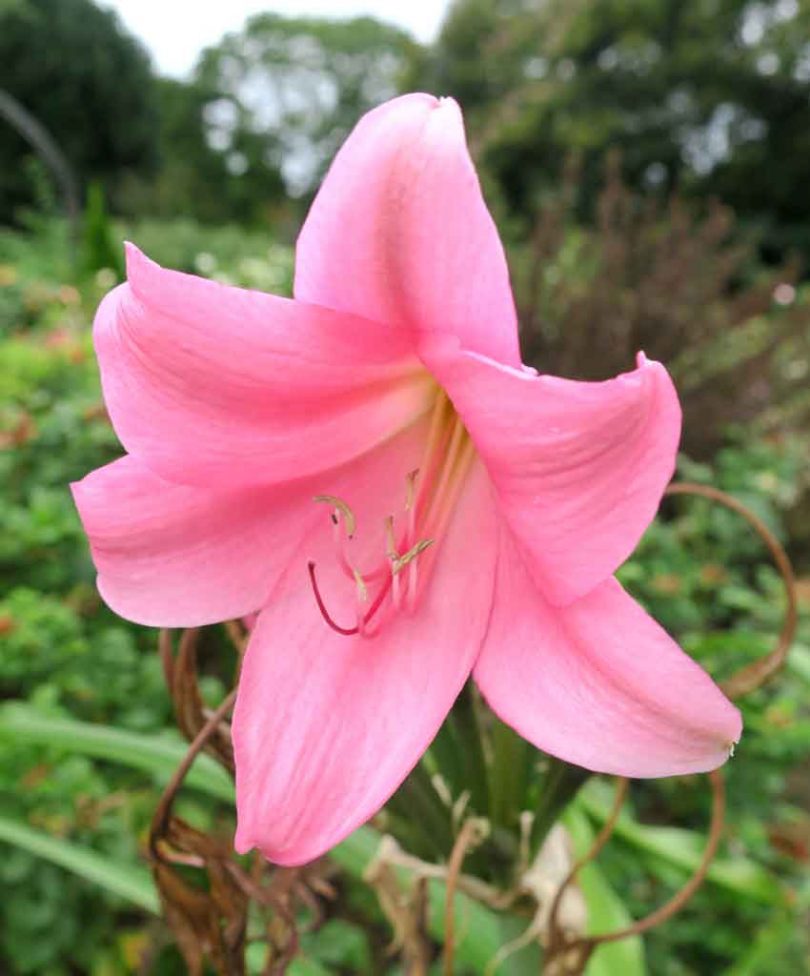 For an imposing garden accent, one that is totally deer proof, look no further than a Crinum lily, specifically ‘Super Ellen’. A highly opinionated lady, ‘Super Ellen’ is well worth the effort because she is the showiest of all the crinums. I first saw her at Jim Massey’s Holly Hill Daylily Farm where she was making her typically dramatic appearance.

Like the diva she is, she never says, “Look at me,” because she knows all eyes are on her. She knows she’s the winner of the ubiquitous beauty pageant, so she demands that all show her the respect she deserves.

Jim promised me one of her offspring as soon as she put out a side bulb, warning that the lady could be slow on the reproductive scale. However, as luck would have it, when I called him the following March he said he had two bulbs, one reserved for me.

At the beginning of the daylily season I went out and there she was in all her glory, waiting for me to take her home—at least that’s how I interpreted her stance but little did I know.

Crinums are conservative creatures that dislike relocation (understatement). The universal rule with crinums is that you need to site them carefully so that you will never, ever move them. My ‘Super Ellen’ wasn’t at all sure she was joining a nice family so sulked throughout that first summer, managing to put out only two or three new leaves.

The next year she relaxed a bit, deigning to throw out a scape or two. And then I did the unthinkable—I cut back her leaves in the fall rather than in the spring. As soon as it happened I knew I had “done wrong” as the saying goes.

Gradually she produced some leaves but was scapeless. I apologized and we began an uneasy relationship that lasted throughout that third summer. Her leaves remained attached until the following spring and for the next two summers she begrudgingly threw out a couple of scapes.

Then she was challenged and proving like the diva she was, she rose to face it. I planted Rosa ‘Peggy Martin’ near her. Now ‘Peggy Martin’ is nice: She doesn’t sulk, she does what she’s supposed to do, which is to grow to incredible heights, producing—no exaggeration—5000 blooms in the spring.

The effect on ‘Super Ellen’ #1 was electric. The diva, used to owning the garden, was about to be upstaged by an upstart, a usurper. At this point she began growing, producing scape after scape, filled with flowers.

It’s impossible to own just one ‘Super Ellen’. I now have three. #2 and #3 are lovely, rather gentle souls who perform the way they should. Crinums on the whole don’t make me laugh although #1 certainly does.

Ironically when the rosarian Peggy Martin returned to her home after Hurricane Katrina, the only two plants still alive in her garden were a crinum and a nameless rose that she designated as ‘Peggy Martin’, the Katrina rose. Perhaps it was inevitable that Crinum ‘Super Ellen’ and Rosa ‘Peggy Martin’ should end up side by side in my garden.