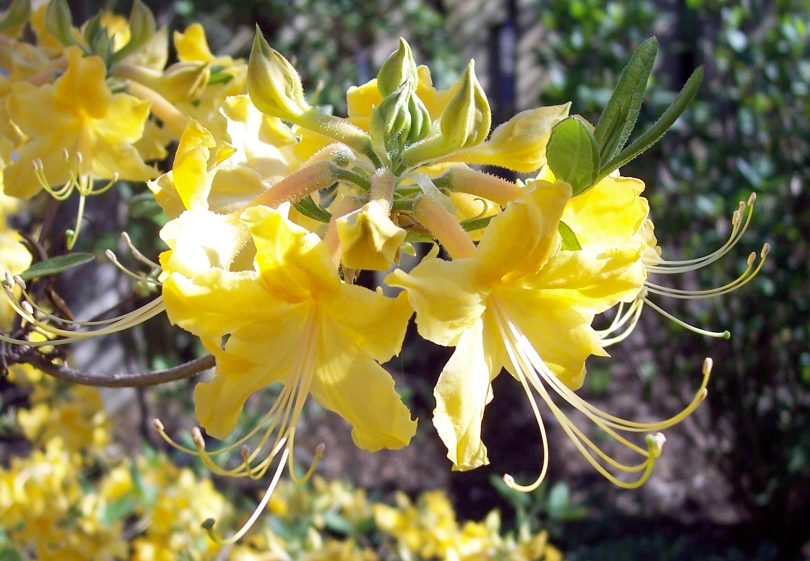 Why don’t we see deciduous azaleas with their showy and fragrant floral display in our gardens?  This variety of species blooms from early spring until late summer.  Even though they grow wild in our woods, deciduous azaleas are not as well known as their familiar cousins.  But they will become more popular as they are seen more often in gardens and people begin to recognize their qualities. 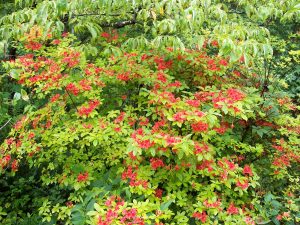 Deciduous azaleas are species in the genus rhododendron and include both native, with nine species listed in the Flora of the Carolinas, and exotic species.  Some species that grow well and are useful in the Triangle garden are Pinxter-flower (Rhododendron periclymenoides), Coast Azalea (R. atlanticum), Swamp Azalea (R. viscosum), Piedmont Azalea (R. canescens), Florida Flame Azalea (R. austrinum) and Plum-leaf Azalea (R. prunifolium).

Pinxter-flower is relatively common in our woods and has light pink flowers in April.  Coast azalea is a low growing and spreading shrub with white flowers and often a hint of pink.  Florida Flame azalea is quite variable in flower color from pale yellow to orange-red and all shades in-between.  Plum-leaf azalea blooms very late in the season usually August but sometimes even into September.

A large number of hybrids and selections have been created using many of these species, resulting in a range of flower colors with excellent fragrance and showy trusses of blooms. Varieties developed for heat tolerance are the best choices for the Triangle area.  Fortunately many hybridizers, who often work in relative obscurity, have developed an amazing array of choices if the plants can be located.

I will mention a few exceptional selections although there are many more.  ‘Snowbird’ is a hybrid found at the Biltmore Estate with powerfully fragrant white flowers and a nice compact habit—these bloom as the leaves emerge in April.  ‘My Mary’ displays yellow flowers with red flower tubes and a sweet fragrance on a smaller shrub about 4’ by 4’.  ‘Varnadoe’s Pink’ is a selection of Piedmont Azalea with medium pink flowers in amazing trusses covering the shrub in early spring.

Although deciduous azaleas are usually found in woodlands, often on slopes above creeks, they are quite adaptable to cultivation.  In general they need well-drained soil that is neither very wet nor very dry, and can grow in full sun to quite a bit of shade depending on the variety.

Like camellias or azaleas, clay soil should be amended with 4 or more inches of compost tilled into a bed 5 feet across rather than just adding amendments to the planting hole.  By adding compost or other well-rotted organic matter to the existing soil the top of the planting bed will be higher than the surrounding soil, which helps promote drainage. Potted plants should be planted so is the crown of the plant is the same depth as in the pot.

These newly planted azaleas need to be watered until established, which usually takes about a year.  So, a good deep watering about once or twice a week in the summer is necessary.  Light fertilizing in the spring is helpful but not essential.  The best flowering will be obtained if the plants are grown in full sun to light shade as sun encourages the setting of flower buds.  Plants grown in bright light will be fuller and more compact while plants grown in woodlands or more shady locations will have an airy and delicate form.  Once in an overgrown garden with waist high grass and brambles I came across a bright orange-red shrub which turned out to be a deciduous azalea in full bloom and it was thriving where most of the other garden plants had disappeared.

The brightly colored selections such as the yellows, oranges, reds and pinks can be used in the garden as highlights in a mixed or shrub border.  The whites, pale yellows and light pinks stand out in a woodland where the flowers may contrast more with the darker colors found in the shade.  If situated close to a path or doorway the wonderful fragrance can be enjoyed, especially in the evenings.  So find a place to plant a deciduous azalea and show people a sumptuous shrub and spread the word about these great plants.

—
David Parks owns and operates Camellia Forest, a local family-run nursery specializing in camellias and ornamental trees and shrubs.   David encourages gardeners to try new, unusual, or underused garden-worthy plants.  You may reach him at 919-968-0504 or [email protected]