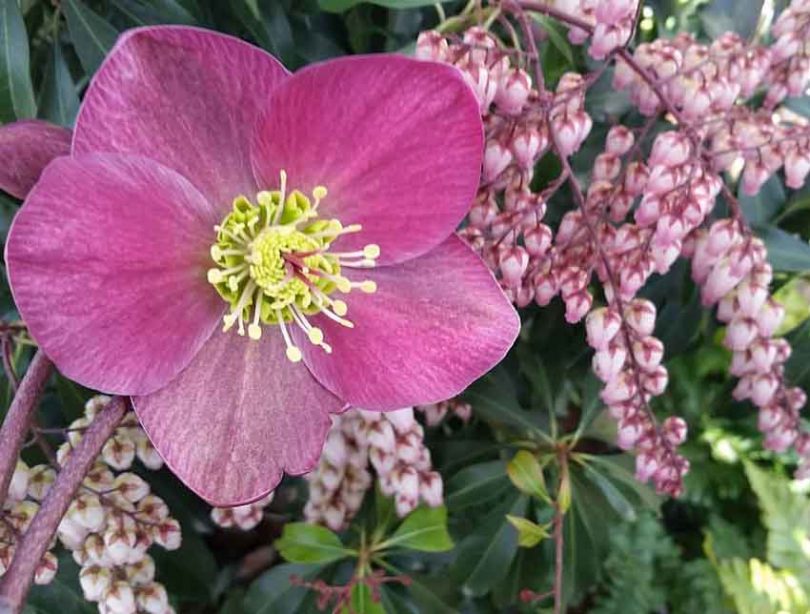 I encountered the destructive behavior of deer for the first time last spring. One morning as I strolled in my garden, I noticed that all my rosebuds had been lopped off. The green stems, missing their pink, yellow, and redbuds, had the same appearance as lollipop sticks sucked bare by children.

When I bemoaned my roses’ disappearance, other gardeners nodded their heads in agreement and related tales of deer damages much worse than my meager losses. More friends chimed in with misdeeds of squirrels, raccoons, voles, and rabbits. If animals are damaging your garden or your home, Deer-Resistant Landscaping (Rodale Books) will furnish “proven advice and strategies for outwitting deer and 20 other pesky mammals.”

Neil Soderstrom is an author of three books and multiple magazine articles. He has also edited over 100 books on gardening, wildlife, and home improvement and is an experienced photographer. 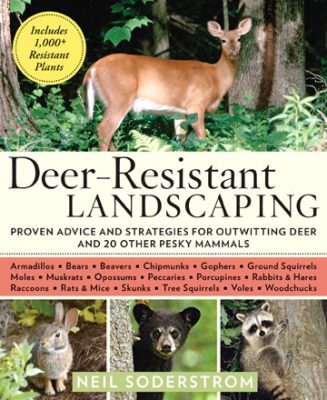 As the title indicates, the majority of the book is about deer. Due to conservation movements, their present population of 40 million has expanded to what it was when the Pilgrims arrived four hundred years ago. No corresponding number of predatory wolves and cougars exists. Given that the grassy and ornamental lawn space in America has grown to eight times the size of New Jersey, deer damage is a natural consequence of their restored number. Information on deer species, signs of their presence, sex life, senses, and eating habits are all explained in the book. Repellents and fencing are discussed with photographs to clarify the instructions.

Although I appreciated learning how to deal with deer, the section I found most interesting was about the 20 other mammals that can enter a garden or a home. These include bears, opossums, rabbits, raccoons, rats, squirrels, moles, and voles.

My favorite chapter concerned my gardening nemesis, voles. I have seen hostas disappear as these small creatures consume the roots. Despite having trapped many voles, plant losses still appear in my garden. As explained by Soderstrom, their persistence presence is possible because voles reproduce in enormous numbers; each female can produce 17 litters in one year for a total of 83 new voles. Plants that aren’t as attractive to voles and better methods of exclusion are suggested for frustrated gardeners like me.

The third part of the book, “Deer-Resistant Plants,” features a list of 1000-plus plant choices. Since deer plant preferences vary from place to place due to soil mineral content, the list includes codes for the location of the recommendation.

Soderstrom’s advice will help me limit animal consumption of roses and hostas. He also suggests tolerance of some vegetation loses by correctly and sympathetically observing that “these marvelous creatures came first historically, and they’re struggling to survive on the edges of the small, often shrinking, patches of habitat we’ve left them.”

Christine Thomson is a Raleigh gardener obsessed with plants.  She is a volunteer at the Raulston Arboretum and fills her spare time reading books, especially volumes about vegetation.