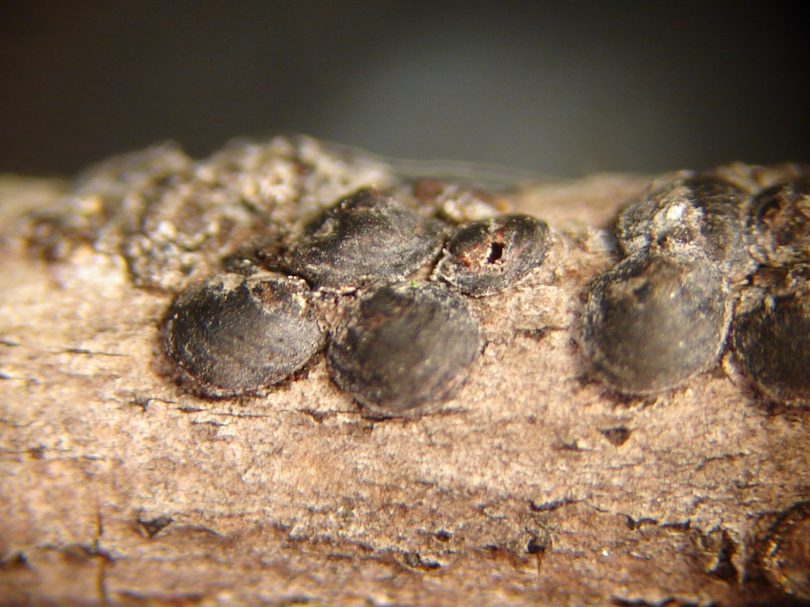 In most cases the answer to that question is NO.  However, there is an insect, or more correctly a group of insects, called scale insects. Their name comes from the hard or waxy covering they produce over their body as a protection.  The immature scale insects are called crawlers because they crawl around looking for a good place to feed and they don’t have this protective covering. 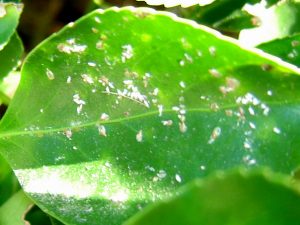 The largest of these scale insects is about ¼ inch in diameter or just slightly larger.  They come in a variety of colors from the easy to spot white to more difficult to detect browns and blacks.  Some species of scale insects feed on a wide range of host plants.  Others feed on a few species or a single plant species.

To determine if a plant is infested with scale insects, look for some of these symptoms.
•    The plant is stunted compared to others around it.
•    There are yellow or white spots on the top of some leaves that would not be there on a healthy plant.
•    Leaves drop for no apparent reason.
•    There is a black coating on stems or upper leaf surfaces that can be wiped off with a damp cloth (sooty mold). 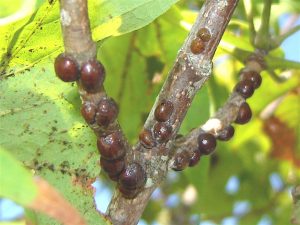 The symptoms will vary according to the species of scale insect.  If some symptoms are present, look under the leaves and on the stems of the plant for the insect.  Some scale insects are very tiny, like the tea scale or the gloomy scale, and are easily overlooked.  Others will be fairly large and easy to spot like the Indian wax scale or the cottony cushion scale.

Scale insects can often be controlled using good practices like:
•    Choose plants that are not likely to be infested by scale insects.
•    Keep plants healthy by fertilizing and watering when needed.  Insects are less likely to attack a healthy plant than a stressed plant.
•    Prune to open the plant canopy.  Allowing sunlight down into the stems of plants often discourages scale insects.
•    Invite beneficial insects to the area by planting flowers and not spraying harsh chemicals.  Beneficial insect populations recover much slower than pest insects when harsh chemicals are used.
•    Remove severely infested stems.

Because of the hard or waxy shell protecting the adult, most chemicals target the immature or crawler stage of the insect.  When chemical sprays are needed to get a heavy infestation under control, choose the least toxic chemicals first.  Chemicals like horticultural oil or insecticidal soap will often kill the crawler stage of scale insects.  Harsher chemicals containing active ingredients like malathion and imidacloprid will kill many species of scale insects.

Remember to always read and follow the label directions when using any chemical. When in doubt, contact your local North Carolina Cooperative Extension Service.

—
Shawn Banks is a Consumer Horticulture Agent with the NC Cooperative Extension Service.