The woodland garden is at its peak in the spring. In order to produce seed, most plants under trees flower early before the trees leaf out and create shade.

Because of this, the woodland becomes an enchanted garden, especially when walking the paths in early spring and happening upon Epimedium, commonly called Fairy Wings (and also known as Barrenwort and Bishop’s Hat.) Some say the common name refers to the profusion of dainty flowers with arching spurs; others maintain that Fairy Wings refers to the shape of the leaves.
Many new introductions of Fairy Wings are becoming available as a result of plant explorations and hybridizing efforts. Fitting into any gardener’s color scheme, Fairy Wings can be found in a wide range of flower colors—white, yellow, orange, rose, crimson, violet—as well as combinations of these on the same plant. 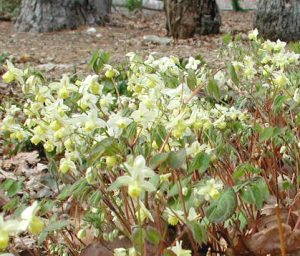 Some Fairy Wings emerge with foliage colors that rival that of its blossoms. For example, Epimedium x rubrum is prized for its leaves, which emerge with a striking reddish margin. In my garden, this variety mingles beautifully with Variegated Solomon’s Seal and Japanese Roof Iris.

Typical leaves are oval, heart-shaped, or shield-shaped. Some are evergreen. The low-growing habit ranges from dense mounds to wide-spreading groundcovers.

One of the most vigorous and reliable cultivars is Epimedium × versicolor ‘Sulphureum’, with yellow flowers and glossy, evergreen leaves. I purchased three in 1995. Slow to establish, they have gradually spread to make a beautiful 1-foot tall groundcover, maintained at 6-feet wide and 5-feet deep.   Enhancing the yellow blossoms of this patch of Fairy Wings are the blue spikes of Bugleweed (Ajuga) and the deeper yellow star-like flowers of Green-and-Gold (Chrysoganum virginiana). Later in the growing season, the lacy fronds of lady ferns and the bold palmate leaves of Lenten Roses (Helleborus x hybridus) provide contrast to the heart-shaped leaves of Fairy Wings.

A prime value of the plant is its versatility in the shady garden. Although it thrives in moist, well-drained soils, Fairy Wings is tough and will more than tolerate dry shade and root competition. Plant in fertile soil with dappled shade or morning sun.

In February, cut back the leaves of evergreen varieties. If you wait until the flowers emerge, you run the risk of cutting the new stems as well as the wiry stems of the old foliage. In spring, Fairy Wings will benefit from a slow-release fertilizer, preferably organic, followed by a liberal layer of mulch. Summer drought will most likely burn the leaves, so water during dry spells. An added plus is deer pass it by, preferring to eat your hostas instead.

Whether a mass planting or interspersed among spring-blooming plants, Fairy Wings provide colorful flowers in early spring and an oasis of green foliage for the rest of the year, giving year-round interest to your woodland garden.

By-line:
Rita Mercer is a shade garden advisor and owner of Rita’s Garden in Apex.  For a virtual tour of her garden or to contact her, visit her website at www.ritasgarden.net.