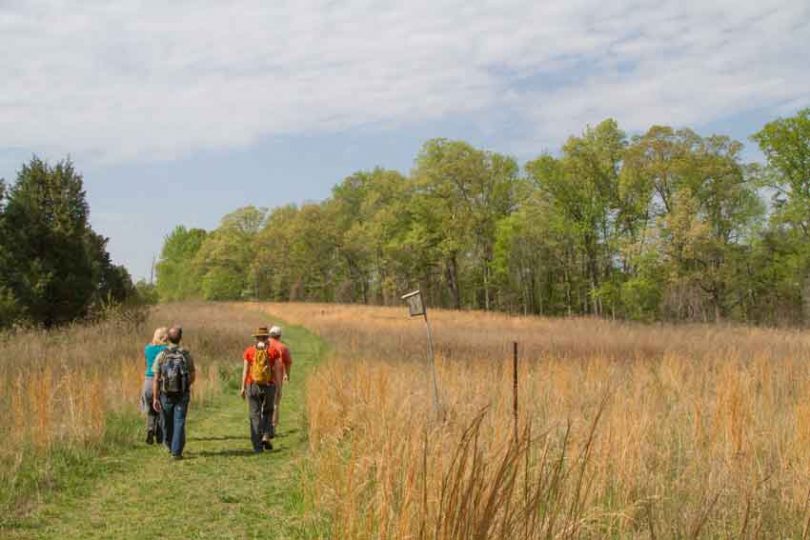 Rare and unusual plants that are more often found on prairies in the Midwest or in the Appalachian mountains also flourish in and around Penny’s Bend Nature Preserve on the Eno River in eastern Durham. The area is known for its spring wildflower displays, exceptional trees, and Piedmont savannas.

At Penny’s Bend, the Eno River takes a huge horseshoe-shaped loop to the south as it detours around a sill of hard diabase, created when fractures opened by the separation of North America and Africa allowed molten rock to intrude horizontally into the surrounding bedrock, where it eventually cooled. The Triangle typically has acidic soil, but diabase weathers into almost neutral or circumneutral soil, meaning nutrients are more available. The Army Corps of Engineers owns the preserve’s 84 acres, but the North Carolina Botanical Garden (NCBG) Foundation manages it. The name Penny’s Bend first appears on an 1890 map, but who Penny was is lost to history.

There are a number of interesting hikes to explore the floral wonders at Penny’s Bend. Near the rapids upstream from Old Oxford Road near Cameron’s Mill look for rare prairie disjuncts, such as blue glade wild indigo, orange-flowered hoary puccoon, and pink smooth coneflower, a Federally endangered species. The NCBG also propagates these plants to reinforce the existing populations. NCBG Director of Conservation Programs Johnny Randall says summer is the best time to see these flowers.

The trail is rich in native flowers, especially towards Penny’s Bend Bluff at the far corner, but there are also many non-natives. Gill-over-the-ground or ground ivy is the showiest non-native, its blue flowers attracting bumblebees.

Cash’s Point Trail, named for the last private owners who specifically wanted Penny’s Bend managed by the NCBG, crosses the peninsula diagonally. The path cuts through the largest fields with broomsedge, Indian grass, glade wild quinine, wild strawberries, yarrow, and other grasses and herbs. Dogwoods and redbuds glimmer on the edges. Large red cedars are one of the first trees in the succession from field to forest here. Tuliptrees, cranefly orchids, and agrimony can be seen at the wooded eastern end.

The Mountains-to-Sea Trail continues east of Old Oxford Road, on the south bank of the Eno, above moist north-facing slopes and sandstone cliffs known as Willie Duke’s Bluff. The bluff is named for the oldest brother of Duke University’s founder, a peacher who is supposed to have practiced sermons from these cliffs. There is a massive abandoned railroad trestle upstream and remains of tobacco barns. This is gameland managed by the Wildlife Resources Commission and has only informal trails. Near the trestle delicate white bloodroot is common in March. Rare Dutchman’s breeches and related squirrel corn carpet the ground, along with golden Corydalis and very rare white-flowered Atlantic Isopyrum or false rue anemone. Two species of trout lily grow here, along with white toothworts, pinkish Douglass’s bittercress, spring beauties, Hepatica, yellow violets, and ginseng. Pawpaws, larval food for zebra swallowtails, reach exceptional diameters. Author Michael A Godfrey calls this “the best developed rich woods and north-facing deciduous community I know of in the Piedmont of North Carolina.”

You can hike at Penny’s Bend on your own or take a guided hike offered by the Eno River Association or the North Carolina Botanical Garden. For more information, visit enoriver.org.

Michael Pollock is a writer who gardens in Durham. He has written for publications such as The Durham News, Carolina Gardener and Chatham County Line.