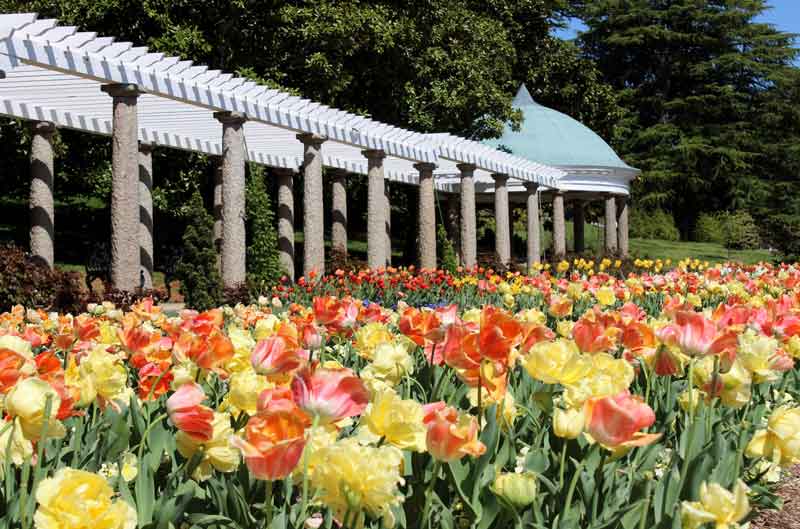 Long known for its Civil War history and as the capital of Virginia, Richmond has taken on a new image recently – as a garden destination.

No, the city didn’t build a bunch of new public gardens overnight. What they did was actually better. They took existing gardens (nine so far) and packaged them into a garden trail for visitors to explore, all within 10 miles of each other.

Developing the Richmond Garden Trail was a brilliant marketing move that places the city on the forefront of garden tourism; an industry sector that attracts more visitors annually than Disney World and Disneyland combined according to Garden Tourism by Richard Benfield.

You can start in any garden on the Richmond Garden Trail. Just make sure you don’t rush through these and miss the experiences. Better yet, make it a vacation centered on the gardens, and then add in other attractions in Richmond. There is a reason why the city was voted “A Best Place to Travel” by Travel + Leisure Magazine.

So where to start? 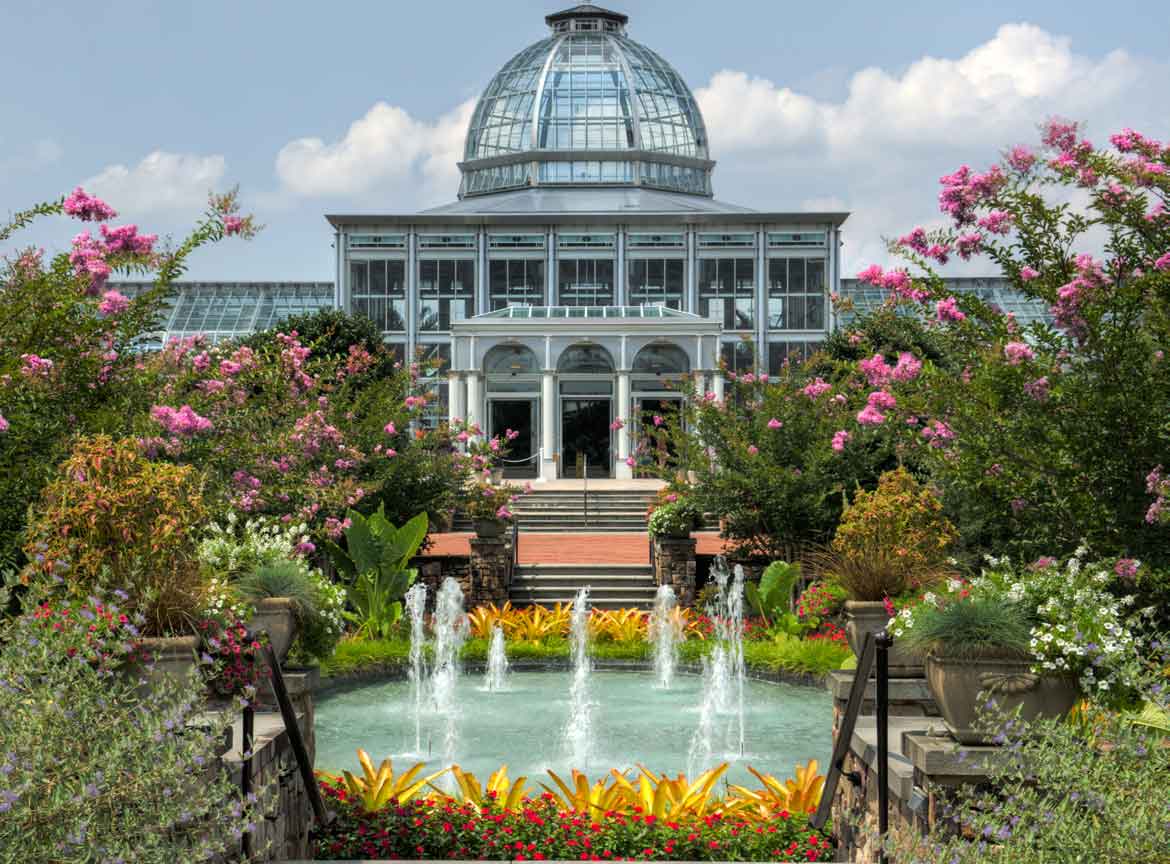 I started at the largest garden and the most well known – the Lewis Ginter Botanical Garden (admission charged.) The garden is consistently ranked among “America’s Best Public Gardens” and it’s easy to see why once you visit. A grand colonial-style building serves as the visitor center and main entrance to the garden. Designed in a series of garden rooms, it invites discovery at every bend and beckons you to linger and enjoy. Here are a few of my favorite spots.

The Healing Garden was the first to catch my attention with medicinal plants and great signage about the ailments treated. The Asian Valley is a tranquil stroll packed with an impressive collection of Asian plants suited to the Mid-Atlantic, and a Tea House for dining. The Louise Cochrane Rose Garden has 1,800 roses beautifully sited on the hillside with archways and arbors for the climbing roses and a series of “rooms” where you can stop, and sit, to smell the roses. The Lotus Bridge to the Children’s Garden is a popular spot to watch the turtles on the floating island. Interaction and exploration – for young and old – is the theme of the Children’s Garden. I especially liked the massive tree house (handicap accessible via a series of ramps) with panoramic views. Just beyond is the Grace Arents Garden, named for Lewis Ginter’s niece. It’s the original section of the garden from the early 1900s and Victorian-inspired in the layout. This area is also the location of the garden’s music concert series.

The jewel of the Lewis Ginter Botanical Garden, and its most prominent building, is the Conservatory. Its 63-foot tall glass dome towers above the landscape. Inside is a wonderful collection of rare and exotic plants – palms, orchids, cycads, cacti, and succulents. In warm weather, one section is converted to a walk-through butterfly house and in winter it is filled with model trains and holiday trees.

Before leaving the Lewis Ginter Botanical Garden, I dined in the café and shopped in the fabulous gift shop. I also had to find the secret. You see each garden on the Richmond Garden Trail has a garden secret to discover. I found them all.

The next two stops on the Richmond Garden Trail took me to some grand estates. 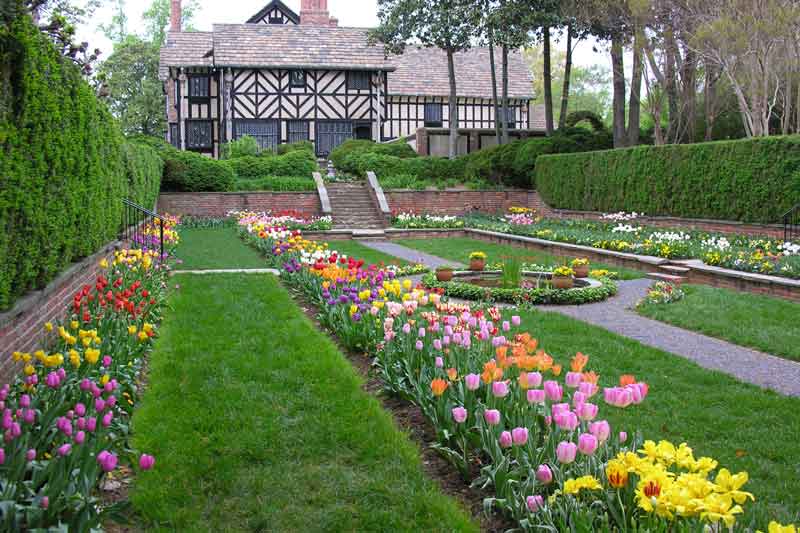 Agecroft Hall (admission charged) is a 15th century Tudor home that was moved from Lancashire, England in the late 1920s to a new English-inspired neighborhood being built on the edge of Richmond. It’s so authentic the AMC TV Revolutionary War series “TURN: Washington’s Spies” was being filmed nearby while I was there. Once the Tudor home was reassembled on the hilltop overlooking the James River, the owners at the time, Mr. and Mrs. Thomas C. Williams, Jr., hired landscape architect Charles Gillette to create English-style gardens with brick walls, allées, boxwood hedges and courtyards. The Sunken Garden is patterned after England’s Hampton Court and is filled with tulips in the spring and annuals in the summer. The Elizabethan Knot Garden uses germander, lavender and green santolina to create the patterns. The Tradescant Garden is named for the 17th century botanists and plant collectors John Tradescant the elder and his son John. The garden includes many of the plants collected by them, including spiderwort (Tradescantia virginiana), which bears their name. The rose arbor includes varieties planted in the early 1930s. The city’s Shakespeare production is held each summer in the courtyard adjacent to the Tudor home. Watch for the new Shakespeare garden opening in 2018. Pick up a copy of the “Garden Walk” to explore the many other gardens on the property. 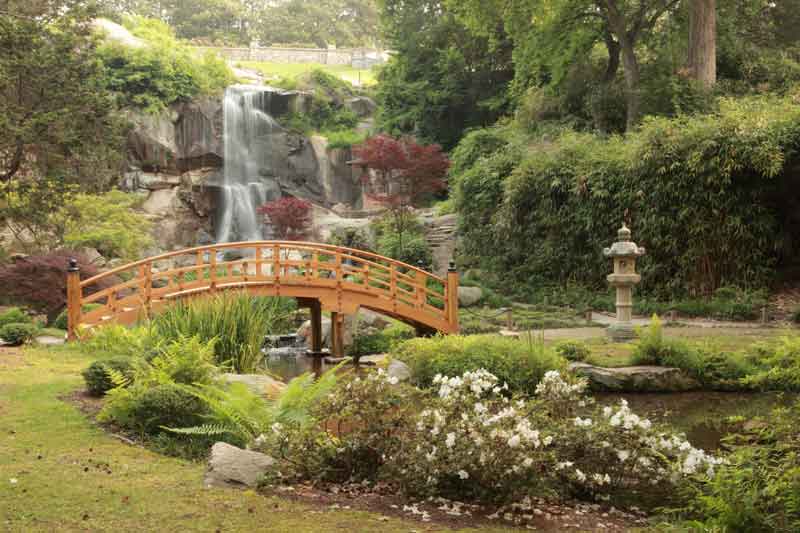 Maymont (free admission to the grounds) is a Gilded Age estate from the late 1800s. Built by a wealthy Richmond couple, James and Sallie Dooley who lived on the estate from 1893-1925, the Dooley’s filled their 33-room mansion with the finest of furnishings including Tiffany stained glass and the famous swan shaped bed. They were also world travelers who developed garden styles from abroad on their estate. Now owned by the City of Richmond, the 100-acre estate includes the 1893 mansion and gardens. And while the house has tours (donation suggested,) it’s the gardens and grounds that are the attraction. The Italian Garden was installed in 1910 on the edge of a hillside with focal points of a gazebo imported from Venice and a pergola with granite columns. And it has lots of roses. At the bottom of the hill, the Japanese Garden built in 1912 and expanded in 1978 has a 45-foot tall waterfall, moon bridge, and an Azumaya – a resting place. Connecting these two gardens is a steep staircase. You can skip the stairs and walk the gentle pathway if needed. There are many other specialty gardens on the 100 acres plus an arboretum with more than 300 species of trees from six continents, including the national champion Darlington oak, the largest of its kind in the U.S. Elsewhere on the grounds is a nature center, wildlife exhibits and a children’s farm (admission charged to these.) Note: This is a massive estate that requires a lot of walking. Wear comfortable shoes.

From here, my route continued to two smaller gardens. 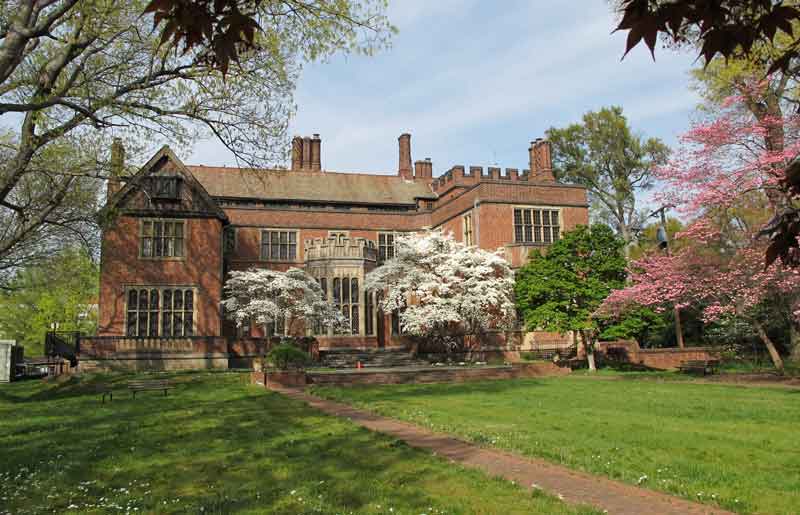 The Branch Museum of Architecture and Design (admission charged) is housed in the Branch family’s former winter home, circa 1919. The Branch family used the 63-room home only 10 weeks of the year during the holidays, preferring to spend the rest of the year at their homes in New York and Italy. The walled garden (no admission to the garden) behind this Tudor-Revival mansion is one of the largest backyards in the Fan – a Richmond historic neighborhood named for its fan-shaped layout of streets. Located on Monument Avenue, the only National Landmark street in the country, the garden is a tranquil spot on this historic avenue lined with 1900s-era homes of Richmond’s then wealthy. 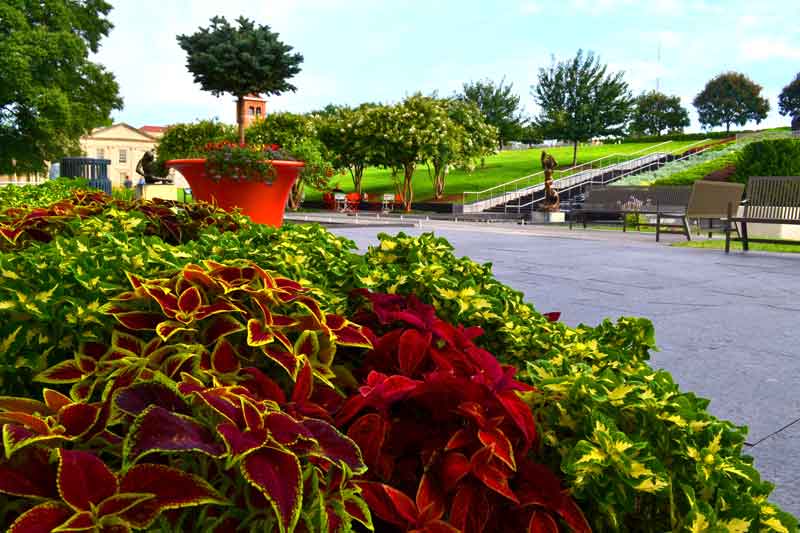 The Virginia Museum of Fine Arts includes the E. Claiborne and Lora Robins Sculpture Garden (no admission) – an outdoor retreat on 3.5 acres with gardens and sculptures ranging from Henry Moore to Dale Chihuly’s Red Reeds. Chihuly’s work is the first site-specific outdoor installation by the famed glass artist to be acquired by an art museum. The garden hosts many of the museum’s outdoor events and is also a versatile space for the community to enjoy. 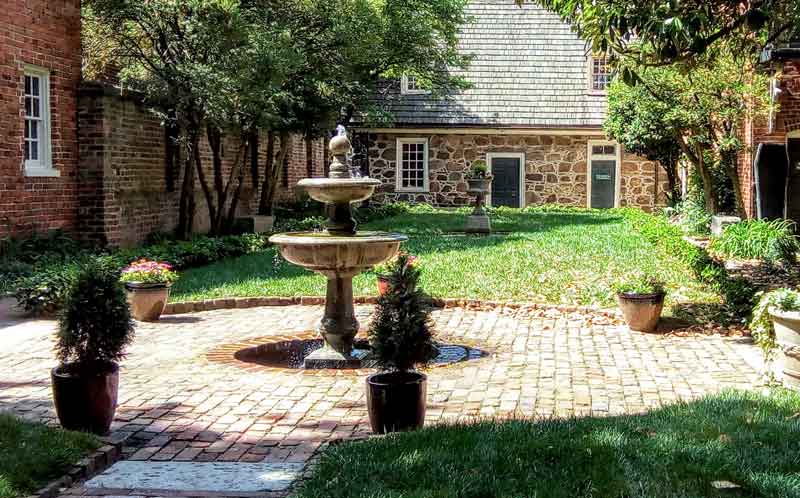 The Edgar Allan Poe Museum and Enchanted Garden (admission charged) is housed in the oldest residence in Richmond. A garden and shrine to the poet, who considered Richmond his hometown, was created by a group of his literary enthusiasts in 1921 on the lot behind the old house. It is patterned after the garden in his poem “To One in Paradise” using many of the plants mentioned in his works. Of special note, the ivy used in the garden was taken from the grave of his mother, who died in Richmond when Poe was just two years old. Unwind in the garden during “unhappy hour” held on the fourth Thursday of each month April-October. 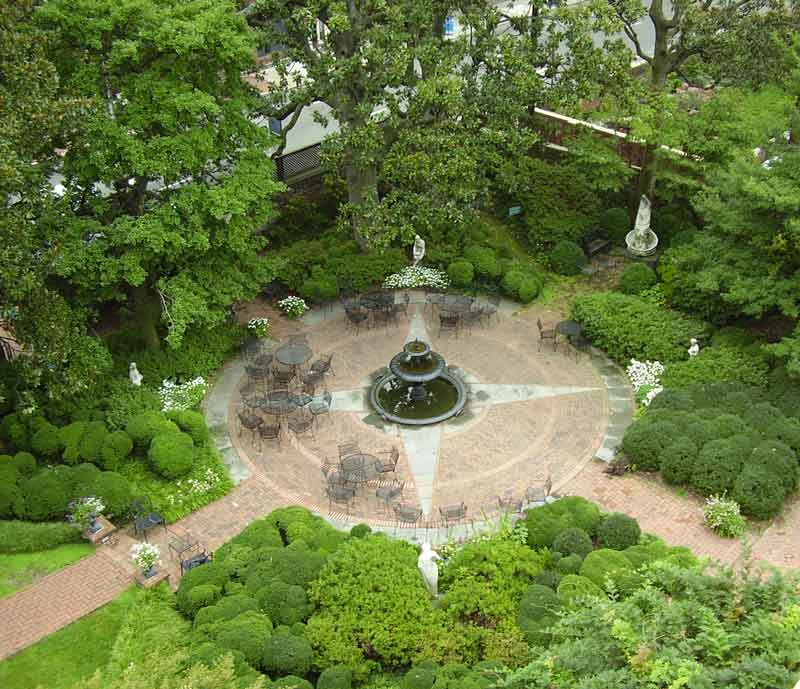 The Valentine Richmond History Center (admission charged) houses 400 years of Richmond history in the Court End neighborhood of downtown and includes the 1812 John Wickham House and Valentine Museum Garden. At one time, Wickham’s original garden stretched a city block in length. The museum’s archive has detailed listings a plantings from its early days. This courtyard garden (no admission charged) is being restored to a 1890s style, though a magnolia in one corner is said to date to 1807. The garden is an oasis and respite in the heart of the city, where you will find many downtown workers enjoying their lunch inside the brick-walled space. An adjacent café also serves food. 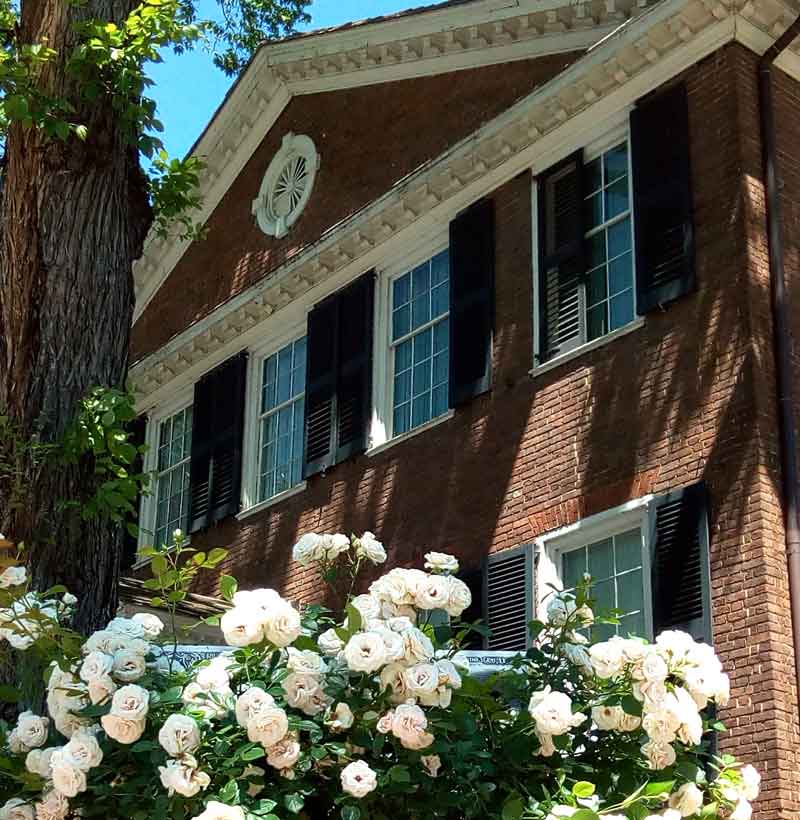 The historic 1790 house of John Marshall, known as the “Great Chief Justice” for his role in creating the modern U.S. Supreme Court, has an interpretation of an English garden from Marshall’s era. The modern city has taken over much of the original property that used to span an entire city block. Today, though small at just one-quarter of an acre, the garden (no admission charged) is a pleasant green spot in the city. 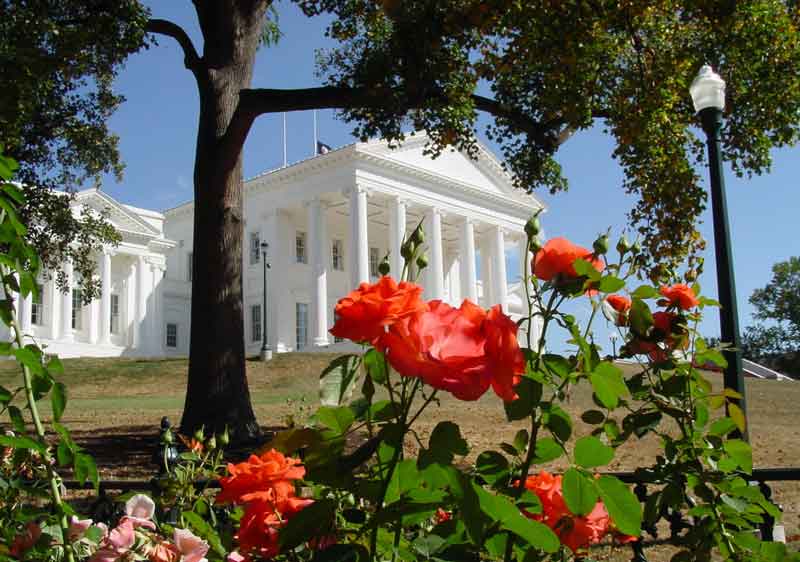 Capitol Square, the location of the state capitol building (the magnificent building designed by Thomas Jefferson) and the Virginia governor’s mansion – both open for touring with reservations – is also a 12-acre urban park (no admission charged) with several garden areas, large trees, monuments, water features, and pedestrian pathways. The original layout was designed by the French architect Maximillian Godefroy between 1816 and 1818, making it one of the earliest designed public spaces in the nation. It was modernized in the mid-1800s in the Picturesque style using high-canopy shade trees and native plants to create a park-like atmosphere.

The Jefferson Hotel and the Linden Row Inn are two places to stay in downtown. 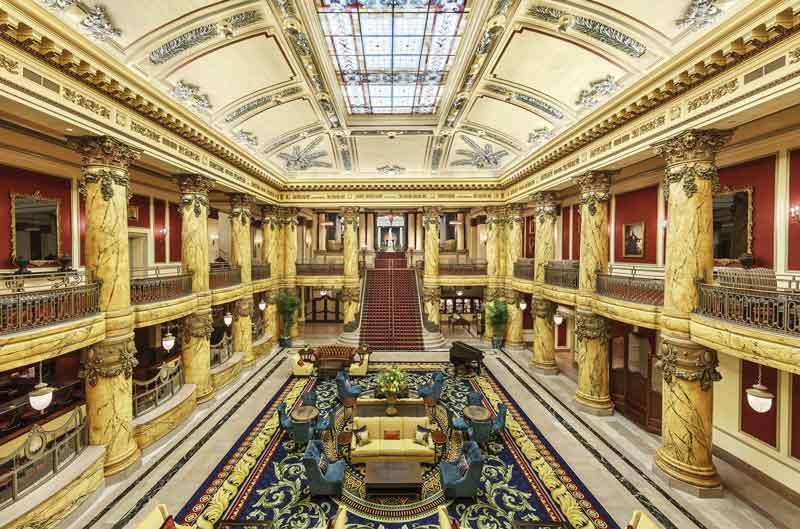 The city’s grand dame of hotels, the Jefferson Hotel is opulent, but not fussy, built by Lewis Ginter in 1895. Early-day guests at this Beaux Arts-style hotel were treated to modern conveniences like electric lights, elevators and hot and cold running water in each guest room – uncommon for 1895. Through the years the hotel has survived fires, economic decline during Word War II and neglect in the 50s and 60s. A complete remodel was recently completed and transformed the hotel back to its standard of luxury. Beautifully decorated guestrooms include high ceilings and marble bathrooms. You’ll want to linger in the lobby and gaze up at the magnificent rotunda ceiling of stained glass. Get off the elevator a floor early and descend down the grand staircase to the lobby, just as early guests did when the hotel first opened. Spend time in the Palm Court where a life-size statue of Thomas Jefferson made from Carrara marble is on display. 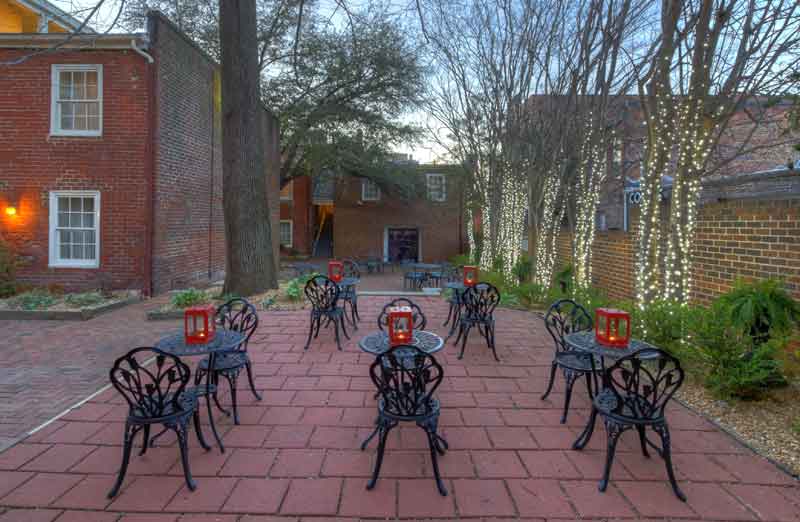 The Linden Row Inn is a 70-room boutique hotel on the National Register of Historic Places. Comprised of seven row houses from the mid-1800s, many of the rooms overlook a quiet brick courtyard and garden. Prior to the row houses, the land was the garden of a wealthy Richmond businessman, Charles Ellis, who bought the property in 1816. Poet Edgar Allan Poe, who grew up in Richmond, played with the Ellis children in the garden. Local legend has it that the Ellis garden is the one mentioned in Poe’s famous poem, “To Helen” and that he courted Elmira Royster, his life-long love, in the garden.

Dining options are many in this foodie town. 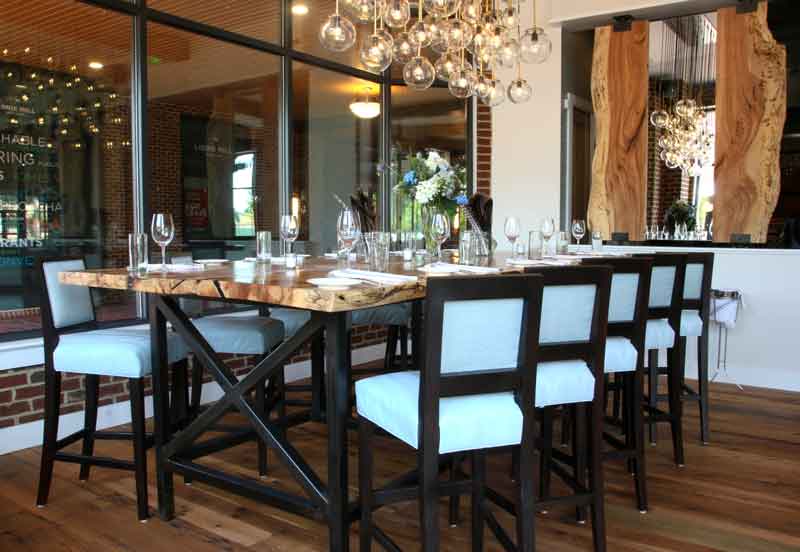 Richmond is filled with dining options. A newer one is Shagbark, named for the Civil War-era shagbark hickory tree that was used to make the restaurant’s communal table. The focus here is on food made from the bounty of Virginia. It’s as stunning as the restaurant décor.

For more information on Richmond and the Richmond Garden Trail, check out www.VisitRichmondVa.com.

Beverly Hurley is the editor of Triangle Gardener magazine in North Carolina. When she is not gardening, she loves to travel.