Next to the Japanese Garden at the JC Raulston Arboretum in Raleigh sits a new building – the Lath House. The structure seems to float above the ground with its walls of thin pinewood slats attached to steel columns. The wooden slats are spaced just far enough apart to allow the perfect amount of sun and wind inside for the enclosed delicate plants. 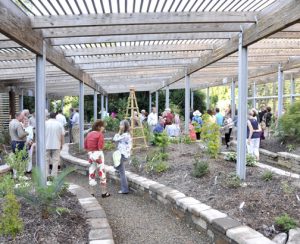 Since the Lath House dedication in September of 2012, the 6,800 square foot space has been filled with over 700 delicate plants. If you enter from the east, you pass a stunning Japanese maple and begin a winding route through raised beds of Celtic concrete stone. Many plants growing in the beds are newcomers from Asia, yet to be judged capable of growth in unprotected locations. Visit this microclimate structure in any season to enjoy a wide variety of plants that could become future introductions to nurseries and to your yard.

This award-winning structure replaced a three decades old building used by J. C. Raulston as the rare plant house to shelter the numerous plants he had brought back from other climates and countries in his successful effort to increase the number of plants available to horticulturists and eventually to amateur gardeners.

The new Lath House is a product of generosity and efforts from many people. The arboretum’s Master Planning Committee developed the plan. Ted Bilderback, the arboretum’s director, presented the plan at a reunion of NC State University alumni working in the green industry. It peaked the interest of Mitzi Hole and Mike Stallings, who had both earned degrees in horticulture during the J. C. Raulston era. They decided to donate to the replacement of the old Lath House that was dilapidated and unsafe. To add romance to the story, Mike and Mitzi were one of the first couples to be married at the arboretum.

Once the reconstruction decision was made, others graciously contributed labor and designs. Paige Moody, an NC State alum and owner of Arbor Enterprises, agreed to provide the labor for the excavation and installation of the seating and retaining walls in the new building. Chuck Friedrich, another alum and horticultural product manager at Carolina Stalite, donated the soil mix, which provides perfect drainage and minimal compaction.