Along the Blue Ridge Parkway, I was mesmerized by a summer meadow splashed with bright pink Carolina phlox (Phlox caroliniana). To meet a plant in its habitat is to know it. Native to the Southeast, border phloxes (Phlox caroliniana and P. paniculata) are at home in cultivated gardens if you give them what they want: rich, humus-filled, moisture retentive soils and six to eight hours of sun. 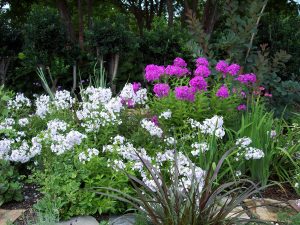 Phlox is quite variable, from sun-loving species to woodland blossoms. In Triangle gardens, you will be guaranteed fragrant flowers and butterflies.

Phlox can grow three to five feet tall with dense heads of brightly colored flowers.  Pinks, purples and whites are typical, though candy-striped flowers and variegated foliage are available. Buying the species is a good idea since they are more mildew-resistant. Location is important; good air flow helps defy mildew. But beware – deer find phlox quite tasty.

From the Northeast, pure white fragrant ‘David’ was selected from a stand of native plants and awarded Perennial Plant of the Year in 2002.  Back in the South, ‘David Lavender’, a relative of ‘David’, offers exceptional mildew resistance.

Once established, share phlox with friends through divisions of these easy-to-dig, shallowly rooted perennials. The species may also throw some seedlings worth growing.  Cuttings taken from the top six to eight inches of non-flowering shoots are another way to propagate phlox.

Byline:
Kim Hawks is an avid gardener in Chapel Hill.  You may reach her at khawks@bellsouth.net.