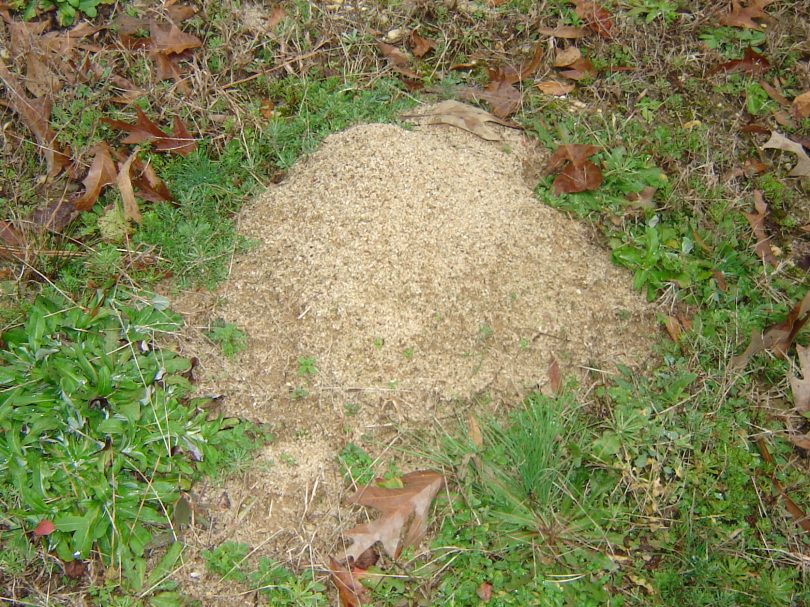 If a fire ant ever stings you, you will learn quickly why they are called fire ants.  There are three or four species of fire ants that can be found in North Carolina, but the one that has become a menace over the last ten years is the red imported fire ant (Solenopsis invicta).  As the common name implies, it is not a native of North America.  It comes from South America.

With no natural predators to keep the population in check, S. invicta has been very successful in spreading its population.  They prefer loose soil in open areas, making parks and new construction prime targets for new infestations. They need the open areas for take off and landing during mating flights.  Having a yard with a tree canopy greatly reduces the chances of fire ants becoming established.

Fire ants are closely related to bees and wasps.  This close relationship has given them the stinger that injects the painful toxin.  About 2% of the population is allergic to the sting of fire ants.  Because S. invicta is a very aggressive species in defending its territory, they attack in large numbers when the mound is disturbed. This can make the stings very deadly to those who are allergic to them.

Identifying fire ant mounds is very important.  Mounds are generally dome-shaped, being twice as wide as they are tall.  S. invicta is one of the very few ant species that has different size ants in the same mound.  Workers range in size from 1/16 to 3/16 of an inch with the queen being about 1/3 of an inch long.  The head and the thorax (section behind the head where the legs are attached) are red in color, while the abdomen or last section of the ant appears black.

Fire ants are omnivores, meaning they eat just about anything.  Their primary diet is other insects such as: fleas, ticks, chiggers, caterpillars and whatever else they happen across.  They also eat seeds especially those with lots of oils and proteins.  Because of this diet, fire ant baits work really well as a control measure.  The bait carries a toxin that kills the ant colony quickly, or an insect growth regulator that kills the colony slowly by sterilizing the queen or preventing the immature ants from reaching maturity.  S. invicta only forages for food when the temperatures are between 70 and 85 degrees F, making spring and fall the best times to apply fire ant baits.

Powders or dusts sprinkled on and around the mound for the ants to track into the colony only work when ants are actively foraging.  The soil should be dry so the dust will stick to the ant’s feet as they move in and out of the mound.

At other times, S. invicta can be controlled using another method of control.  Drenches are formulated so water carries the poison down into the soil.  Since the fire ant mound may have tunnels extending several feet down, a minimum of two gallons of solution is usually recommended for each mound.  Some drenches are mixed directly with water and then poured over the mound, while others are granules that are sprinkled on and around the mound and then drenched with water.  Drenches are best used when the ants in the mound are near the surface such as cool mornings or evenings when temperatures are around 50 to 70 degrees F.

The last method, exclusion, is also the most expensive.  There are a few chemicals that can be broadcast into the landscape, and then watered into the soil that will kill the fire ants when they come in contact with the chemical, preventing them from building mounds in that area.  These products can be applied at any time of the year.  They should be used in areas where there is a high likelihood that people will come in contact with fire ants.

For more information on controlling fire ants contact your local NC Cooperative extension office.  A list of locations may be found at www.ces.ncsu.edu/index.php?page=countycenters.

—
Shawn Banks is a Horticulture Agent with the NC Cooperative Extension Service.