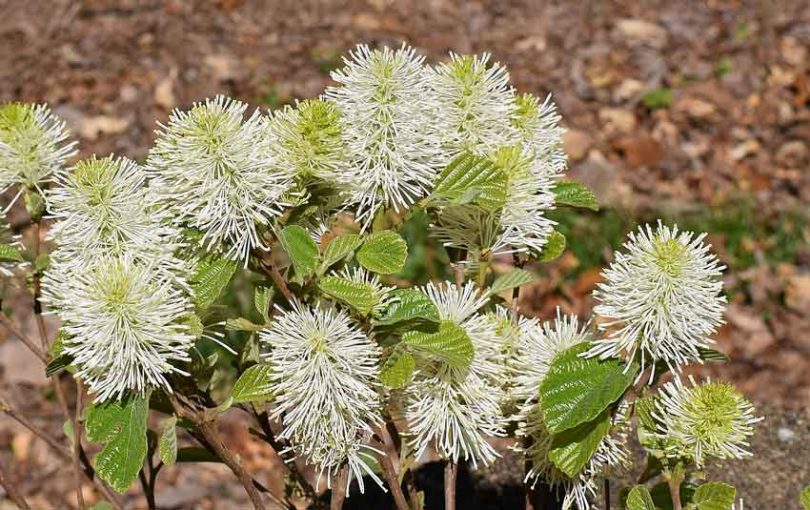 If you are thinking of adding more native plants to your garden, but don’t want to sacrifice on multi-season color, consider fothergilla. This low-maintenance, deer- and disease-resistant shrub might lose its leaves in the winter, but it has more than enough other qualities to make up for it.

Native to the Southeastern U.S, fothergilla is part of the Hamamelidaceae (Witch Hazel) family and consists of two distinct species, both of which hail from North Carolina. Dwarf fothergilla, Fothergilla gardenii, is native to the coastal regions from North Carolina to Alabama, where it grows in wetland savannas and shrub-bogs. Low growing, it rarely grows higher than 3 feet tall, but can sucker to a wider spread. Mountain fothergilla, Fothergilla major, is much larger, occurring mostly in the mountainous regions of the southern Appalachians and into Arkansas.

Occasionally it is found in the North Carolina Piedmont. In its native environment, mountain fothergilla can reach 6 to 10 feet tall. Leaves are also about twice as large as dwarf fothergilla.

Both species bloom for two to three weeks in spring, before leaves emerge. Flowers are white, honey-scented, and shaped like bottlebrushes. These unique blossoms do not contain petals but are instead clusters of stamens, the filaments usually found in the center of the flower that is topped with pollen. Unsurprisingly, the flowers are attractive to bees and the shrub is a great early-season bloomer for pollinators. Emerging leaves are a soft green to an attractive blue-green and unlike many other deciduous shrubs, remain attractive throughout the summer.

Fothergilla’s second big show of the year begins in late fall after most other deciduous trees and shrubs have already colored and passed. This alone makes it stand out, but the true showstopper is the kaleidoscope of colors that are often produced on the same plant – yellow, orange, red, and burgundy. Color each year may be slightly different, influenced by light, temperatures, and moisture. Despite standing bare in winter, fothergilla continues to hold some interest with its pale pubescent buds on brown stems and zig-zagging branching.

In retail garden centers, you will most likely find a hybrid between our two native species: Fothergilla x intermedia. Two cultivars are widely available. ‘Mount Airy’ is the larger of the two, reaching 5 to 6 feet tall and wide. Leaves are a pale blue-green and remarkably attractive. ‘Blue Shadow’ has even more stunning leaf color, emerging pale green but later coloring to a beautiful dusty blue. In cultivation, ‘Blue Shadow’ typically grows 4 to 5 feet tall and wide.

Not only beautiful, fothergillas are long-lived plants, reaching up to 60 years if they are happy. They are rarely touched by pests or harmed by disease. Rabbits and deer don’t bother them. The only pruning they require is the removal of suckers at the base as desired. Grow in full sun to light shade. Leaf color and blooming are best the more sun the plants receive, but plants do prefer some afternoon shade in hot climates. Soil is preferably well-drained and slightly acidic, although as a descendant of marsh-loving dwarf fothergilla, hybrids can tolerate wetter conditions as well. Fertilize in spring with an acid fertilizer.

In the garden, fothergilla looks stunning next to dark evergreen shrubs, especially the needled texture of conifers. Loropetalum and other burgundy-leaved shrubs also contrast well with fothergilla’s blue-green leaves. In a purely native garden, fothergilla may bloom alongside columbine or baptisia for a particularly colorful show in spring. Wherever you decide to place it, fothergilla is sure to earn its keep with beauty.

Val Engel is the Tree & Shrub Buyer at Atlantic Gardening Company and can be reached at vengel@atlanticgardening.com.