Winter is the slowest time of the year for gardeners. To ease the itch to hoe and to plant, Andrea Wulf’s, Founding Gardeners (Knopf, 2011), provides an escape with an informative history of how early American gardening was influenced by the first four presidents of the United States.

According to Wulf, gardens at Washington’s Mount Vernon, the Peacefield home of John Adams, Jefferson’s Monticello, and the Montpelier estate of James Madison reflect the personality and life-style of their presidential owners. 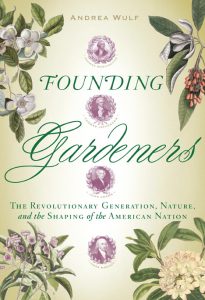 Because Washington wanted Mount Vernon to be “truly American,” his was the “first ornamental garden to be planted almost exclusively with native species.” Despite the worries of managing an army during the Revolution, he regularly wrote detailed instructions to his estate manager of what he wanted planted to beautify the area. His preparations to show America’s loveliness to foreign visitors were wise. Washington was so deluged with guests that it was a year and a half after his presidency ended when he recorded in his diary that he was without company for dinner for the first time.

Being a Massachusetts small farmer and a lawyer made John Adams’ interest in the land more practical than the other presidents who were wealthy Virginia planters. His original forty-acre plot outside of Boston was primarily a working farm on which Adams enjoyed planting crops, digging, spreading manure, and basking in the solitude. He did most of the physical labor; the other presidents supervised slaves. Although while a diplomat he toured English gardens with Jefferson, he couldn’t afford to recreate their elegance when he returned to America as Jefferson did.

Wulf credits Jefferson with having the most experimental gardens of the presidents. He saw America as a country whose future would be best developed by farmers, not by merchants, a class whom he despised. In addition to maintaining lovely formal gardens, he constantly planted seeds from other countries, searching for products to decrease America’s dependence on foreign imports and to create profitable exports. His knack for invention included a much more efficient plow for farmers to better cultivate America’s soil.

In 1817 when James Madison retired from politics, the country had changed dramatically from Washington’s period. Canals, roads and steamboats had eased transportation, the Louisiana Purchase had increased its size, and its population had doubled. With these positive changes had also come negative conditions, such as a massive loss of soil fertility and the declining size of forests. At a Society of the Albemarle meeting, Madison spoke in detail of how to balance nature with man’s needs. His speech was the first to discuss many environmental problems and their solutions. The importance of His message was recognized and then published as a pamphlet in America and in Britain.

Andrea Wulf’s historical research is presented in a detailed, readable style similar to her 2008 award-winning volume, The Brother Gardeners, which explains the development of botany and gardening in Britain. The included botanical drawings, maps and images of the various presidents’ homes add to the reader’s awareness of how important gardening was to our past.

Byline
Christine Thomson is a Raleigh gardener obsessed with plants.  She is a volunteer at the Raulston Arboretum and fills her spare time reading books, especially volumes about vegetation.