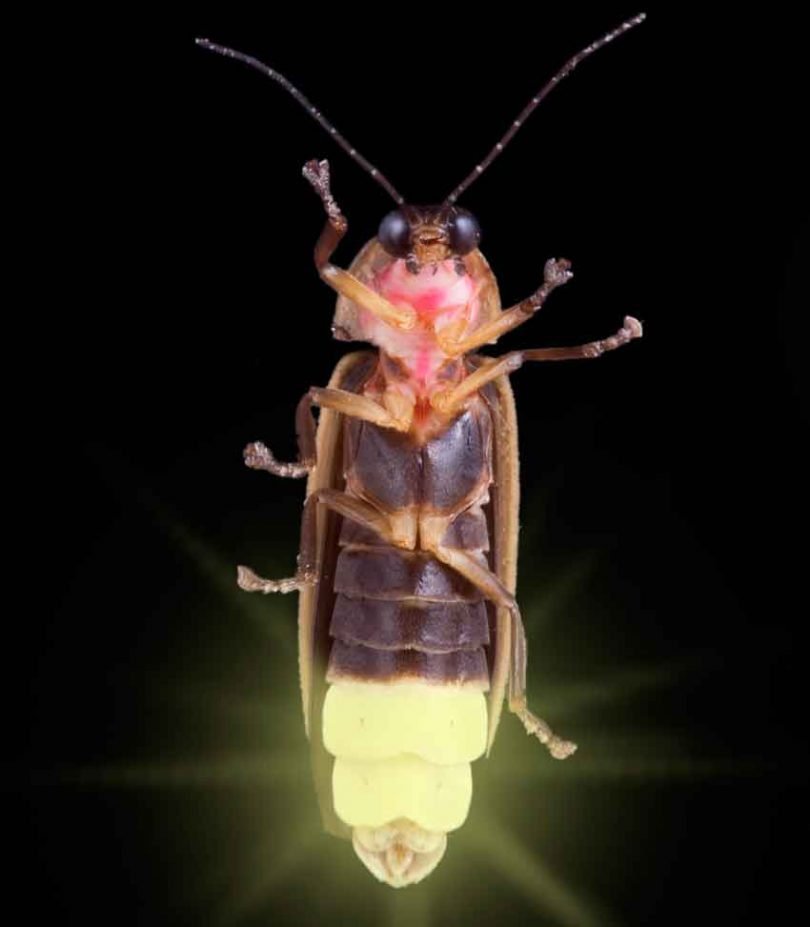 I was one of the lucky ones, growing up on the East coast of Virginia where lightning bugs, as we called them, lit our warm evening summer sky, often as early as May. Today’s term for these beetles seems to have gravitated towards fireflies. I like that too, but I still fall back on my childhood term of lightning bugs; after all they were lighting up the night sky like that of a summer storm.

There are more than 2,000 species of fireflies, a type of beetle. Did you know there are fireflies out West as well, but they don’t light up the sky at night? Despite their name, not all fireflies glow. Fireflies in the western United States, for example, lack the ability to produce light. Another interesting fact about fireflies is most females don’t fly. Instead, on the East coast at least, they remain in moist leaf litter and flash to a receptive mate.

Sadly, fireflies are in decline. The reasons are still to be pinpointed but experts believe habitat loss and light pollution play a role by interfering with firefly flash patterns. Light from buildings and streetlights make it difficult for fireflies to signal each other during mating season—meaning fewer fireflies. It has been noted flashes of synchronous fireflies get out of synch for a few minutes after a car’s headlights pass.

Males flash to attract females, and mating begins when the flash carries the right rhythm. The flash of a male firefly is only the first stage of courtship, and may not even be the most important. I can’t believe I’m about to say this, but a study shows, size matter! Females are more likely to mate with males who give them a larger nuptial gift.

Like all beetles, fireflies undergo complete metamorphosis with four stages in their life cycle: egg, larva, pupa, and adult.

Egg – In mid-summer, mated females will deposit about 100 spherical eggs, singly or in clusters. Fireflies prefer moist soils, and will lay eggs under mulch or leaf litter, where the soil is likely to stay moist. But it varies by species. These eggs usually hatch in three- to four-weeks.

Larva – Larvae emerge from their eggs in late summer, and live in the soil through the winter before pupating in the spring. This is one of the many reasons to keep leaf litter in our garden beds. At night the larvae hunt and eat slugs, snails, and worms. To consume food, the larvae will capture and inject its victim with digestive enzymes to immobilize it and liquefy its remains.

Pupa – Different species of firefly larva pupate in different ways. When the larva is ready, usually in late spring, some species construct a mud chamber in the soil and settle inside it. In other species, the larva attaches itself to a tree’s bark, hanging upside down by the hind end.

During pupation, a remarkable transformation takes place during the pupal stage. In a process called histolysis, the larva’s body is broken down, and special groups of transformative cells are activated, triggering biochemical processes that transform the insect from a larva into its adult form. When the metamorphosis is complete, the adult firefly is ready to emerge, usually about 10 days to several weeks after pupation.

Adult – When the adult firefly emerges, it has one purpose, to reproduce. To find a mate, fireflies use a species-specific pattern to locate compatible individuals of the opposite sex.

Typically, the male flies low to the ground, flashing a signal with the light organ on his abdomen, and a female resting on vegetation returns his communiqué. By repeating this exchange, the male hones in on her, and the rest of the story is happily ever after.

No matter the life cycle, all stages of fireflies glow. Bioluminescence is present in firefly eggs, larvae, pupae, and adults, and even some larvae living below the ground or underwater glow. Some firefly eggs emit a faint glow if disturbed.

Experts theorize the ability to emit light helps larvae signal to predators that they aren’t appetizing, since part of the firefly defense mechanism is to produce foul-tasting steroids.

The firefly’s glow is the result of the reaction of two chemicals found in their tails, luciferase and luciferin. Luciferin is heat resistant and provides the glow. Luciferase triggers the flash. Firefly light can be yellow, green, or orange.

Where do Fireflies Live?
Fireflies thrive in warm, humid climates, which is why they are found on almost every continent on Earth. Fireflies inhabit forests, fields, and marshes near bodies of water because they require a moist environment to survive. Some species of firefly larvae have gills and are aquatic, while others live in trees.

What do Fireflies Eat?
As adults, most fireflies feed on nectar and pollen, but some don’t seem to eat at all. Those few species that carry their carnivorous lifestyle into adulthood switch from snails to other fireflies. Yikes!

Lightning bugs are so ingrained in our childhood memories. I’m sure everyone on the East coast has a memory to share. The top one is catching them and keeping them in a mason jar for the night.

There is plenty of air in the jar to keep the insects alive for a day or more, and poking holes in the lid will cause the jar to dry out too quickly. Instead, put a small piece of washed apple and a small clump of fresh grass in the jar, or moistened paper towel in the bottom, keeping the air in the jar moist, and it gives the fireflies something to grab onto. The grass is for them to climb on and hide in.

Every day, unscrew the jar lid and blow across the top of the jar. This keeps the air in the jar fresh. Don’t put the jar in direct sunlight.

You don’t need to feed the fireflies. Most adults never eat. They did all their eating as larvae. But don’t keep them in a jar for more than two or three days. Fireflies only live a few days or weeks, and we need them outside to mate.

Unlike some other insects, fireflies are no bother to us humans. They don’t sting, bite, attack, or carry disease.