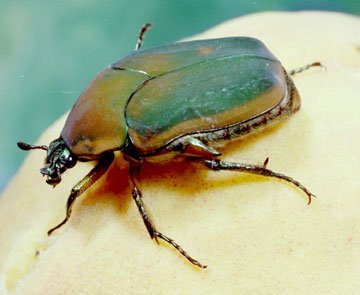 I am sure you have noticed the large green beetles flying around.  Green June beetles  (Cotinis nitida) are present from June through August.  They fly low to the ground and are relatively slow fliers with a habit of running into things.  Quite often during this time of year they will fly into windows.

The adults are about one inch in length and about ½ inch wide.  Their elytra (hard front wings) are a metallic green or greenish brown in color, the outer edge being a light brown to orange yellow.  As adults the beetles are drawn to over-ripe fruit such as peaches, tomatoes, and figs.  Female adult beetles lay their eggs by digging a shallow hole in loose sandy or sandy loam soils that are high in organic matter.

The large grub does most of the damage as it feeds on organic matter in the soil from August through April.  The white grub can reach a size of about 2 inches long and be about ½ an inch in diameter. The grubs eat organic matter in the soil, not the roots of living plants. The size of the tunnels they make can create problems with soil drying quickly or roots of grass dehydrating.

As they feed they often come to the surface leaving a small mound of soil next to a hole in the turf.  They will move over the surface of the soil with an undulating motion while lying on their back.  It is quite interesting to watch.  This tiny spectacle can be observed from late September through November and again from mid February through April.

If there are more than three or four of these grubs to a square foot they may make the soil feel very spongy to walk on.  When they reach these large numbers control may be needed to save the lawn. The North Carolina Agriculture Chemicals Manual lists Sevin granules spread over the infested area as the best means of control.

For those who prefer a more natural control method, there is a large, dark-colored wasp called Scolia dubia that is a natural predator of green June beetle grubs.  This wasp can often be found flying over infested areas during the month of August searching for grubs.  The wasp is about one inch in length and blue-black in color, with two yellow spots about half way down its abdomen.  The area past the yellow spots is brown and fuzzy.  The dark blue wings are another characteristic that can be used to identify this wasp.

For more information about green June beetles contact your local office of North Carolina Cooperative Extension Service or view the information on the web at www.ces.ncsu.edu.

Byline:
Shawn Banks is a Consumer Horticulture Agent with the NC Cooperative Extension Service.  You may reach him at [email protected]