This title’s inclusion of “speed” is typical of Graham Kerr, who is best known for his 1969-71 fast-paced TV cooking show, “The Galloping Gourmet.”

The nickname came from a book he co-authored after visiting the finest restaurants around the world in a mere 35 days. Kerr continued this galloping image by beginning each show running down the aisle of the audience-filled studio and jumping over a chair to reach the set’s dining room. There he successfully cooked rich, delicious dishes with humor and lots of butter. 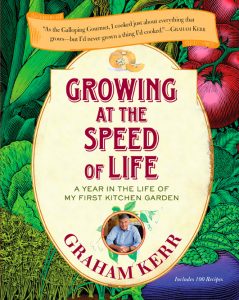 Time and changing food tastes have modified Kerr’s cooking style. Since his wife’s heart attack in the late 1980’s, he has become more interested in cuisines with less fat.

This led him to more cooking with vegetables and finally, to attempting to grow vegetables himself. Kerr writes that the purpose of Growing At the Speed of Life: A Year in the Life of My First Kitchen Garden (Penguin Group) is to serve as an introduction to gardening for the person who begins his or her own first garden. He also includes over one hundred recipes.

To avoid the overkill he experienced from the massive information in gardening books, Kerr limits his gardening advice to thirteen “need-to-know” topics.

Since he had not previously grown anything, he questioned experts and neighbors to identify the best soil, compost, drainage, fertilizer, watering routine, etc. He wittily passes on their advice and his mistakes to readers as he describes changing a lawn into a garden and a greenhouse.

After Kerr discusses his garden plot, he gives cultivation information and recipes for sixty vegetables and fruits. The growth instructions are quite informative, including listings of pro and con companion plants, best varieties, pests, diseases, and required pH balance.

The vegetables are not limited to Southern garden staples; artichokes, bok choy, chard, chickpeas, Napa cabbage, leeks, and kohlrabi are part of his alphabetical arrangement. Similar information on herbs is given, minus recipes.

The three to four recipes that accompany each vegetable emphasize healthy cooking. Desserts and dishes containing meats are limited in number. The recipe that I tried was similar to a quiche I had baked for years. Though the spices, onions and amount of spinach remained the same, the new recipe removed the crust, changed hard cheese to ricotta, recommended egg substitute, and added fresh tomatoes.

Whether your garden is “a few square yards in a suburban backyard, a couple of pots on a balcony in the city, or an acre or so in the country,” Kerr’s healthy advice, humorous writing and tasty recipes will brighten your garden and your table.

Byline
Christine Thomson is a Raleigh gardener obsessed with plants.  She is a volunteer at the Raulston Arboretum and fills her spare time reading books, especially volumes about vegetation.