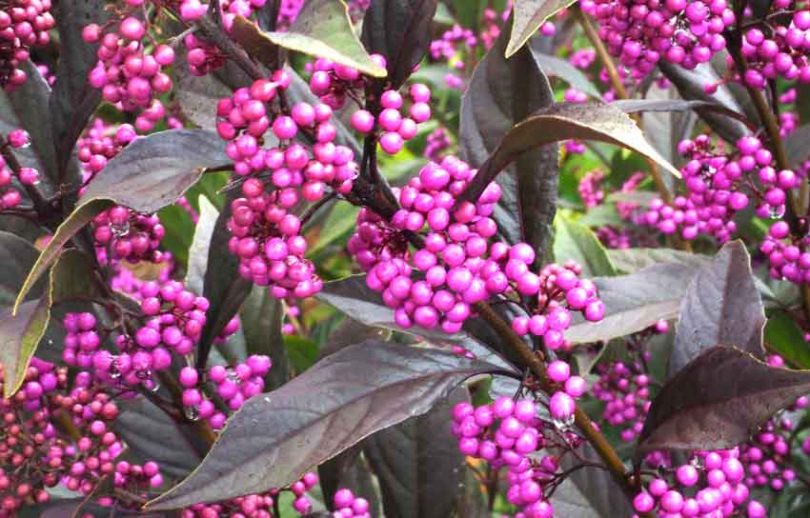 Fruiting shrubs are among the top treats for the autumn garden especially in the south where fall foliage can be pretty poor in most years. While the reds of the hollies and oranges of pyracantha are lovely, the surprising purple of beautyberry is a breath of fresh air in the garden.

Although it is a large group, around 150 species, there are relatively few that are typically found in gardens. They all bear dense clusters of small white to lavender flowers in summer followed by very showy glossy fruits, typically purple with a metallic sheen, but white, pink, and dark red-violet species and selections occur. The flowers on all garden species support a diversity of pollinators and the fruits are eaten by birds, although they are generally not most birds’ first choice. Three main species make up the most commonly found forms in nurseries; one is a Southeastern U.S. native, and the other two are from Asia. 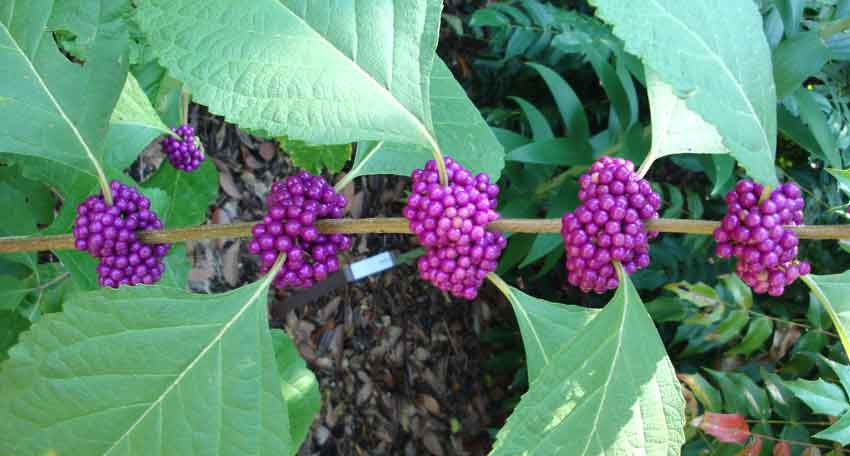 Our native beautyberry, Callicarpa americana, is found from Maryland to Florida and west to Missouri, Oklahoma, and Texas. It makes a rather large shrub growing to 6 feet or more tall and wide with large, felted leaves. The lavender flowers are attractive up close but are mostly obscured by the foliage at any distance, but the fruit show is simply glorious. Tight clusters of brilliant purple BB-sized fruit appear at each leaf node along the stem. It fruits best in full sun but will tolerate considerable shade. Plant it in a moist, well-drained to permanently damp spot. An odd characteristic of the American beautyberry is that if you rub the foliage on your skin, it deters mosquitoes about as well as most spray repellents.

Both Asian species of beautyberry commonly seen in the U.S. are native across most of the southern half of China and into Japan. Callicarpa japonica is generally smaller than our native beautyberry in all respects growing to about 5 feet tall and wide with a somewhat upright habit and mid-sized leaves. The flowers are often paler than either of the other species and give rise to clusters of small purple fruits. C. dichotoma is the smallest of the beautyberries, generally only growing to about 4 feet tall and wide. Although more diminutive in most respects, leaf size and fruit size, it actually has larger clusters of flowers and fruit than its Asian counterpart. C. dichotoma is generally a bit wider than tall and is quite graceful in the garden. Both of these species can be grown like their American relative, but have less of a tolerance for permanently wet soils. 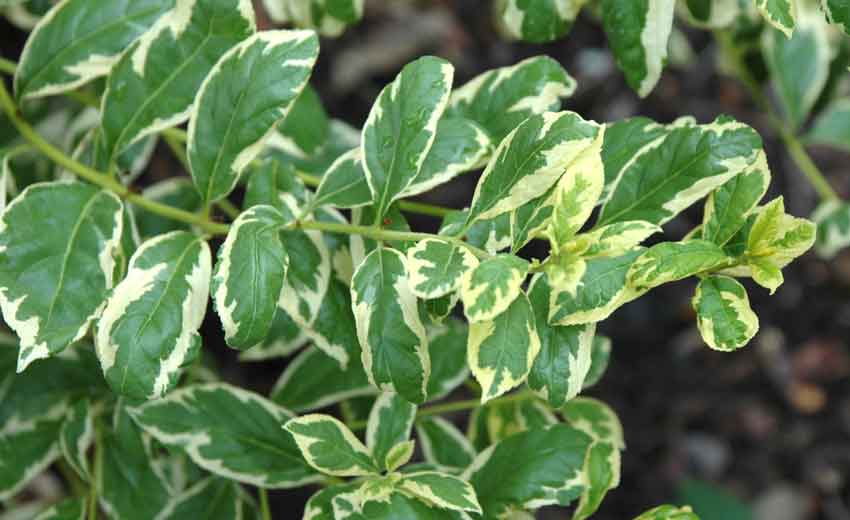 There are a variety of named selections of beautyberry including the beautifully white-margined C. dichotoma ‘Duet’ released by the US National Arboretum. Alas, while this form is lovely all summer long, it rarely sets any fruit. A new selection has recently been released from Dr. Tom Ranney’s breeding program at NC State University. Pearl Glam grows upright to about 5 feet tall and only 3 feet wide. The foliage is purple and has light pink-white flowers followed by a heavy purple fruit set. I grow this one with a soft pink clematis through it to great effect in my home garden.

If you find yourself bitten by the beautyberry bug, there are other selections and diversity of species that are sometimes available through better garden centers and specialty mail-order nurseries. All are easy to grow and most are quite showy. All beautyberries flower and fruit on new wood, so plants can be cut to the ground each winter to control the size and promote more flowering and fruiting. Once the birds have finished off the holly berries, expect them to come for the beautyberries, starting with the American species followed by the Asian ones, or cut the stems before the birds get to them to bring these indoors for a pop of purple in flower arrangements.