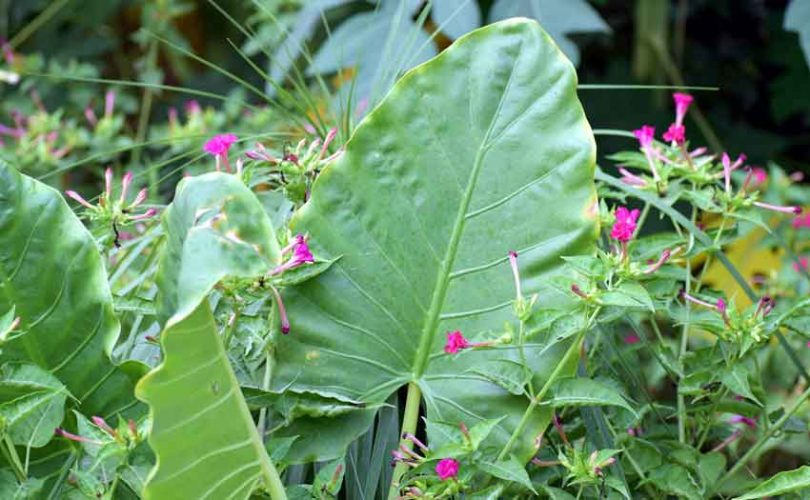 For some unaccountable reason, I was asked to give a presentation on bulbs to a group of knowledgeable gardeners – and I hasten to add that my gardening fame (such as it is) has never extended to bulbs. To overcome my shyness with bulbs, frantic research has taken place over several months.

We apply the word “bulb” in several different ways: (1) we employ it to depict the true bulbs; and (2) we use it to define geophytes, those plants that have underground storage systems. This includes not only the true bulbs, but also corms, tubers, rhizomes, and tuberous roots.

Being neat and tidy, I’ve managed to sort out a lot of geophytes. The gladioli have corms, potatoes have tubers, irises have rhizomes, and dahlias have tuberous roots – you get the idea. And then I came across colocasia.

Now when I was in my tropical plant phase (no leaf could be too big), I planted a lot of colocasia. I even tried the gigantic ones, which, had they taken off, would have dwarfed my garden. Obviously, I was really into colocasia.

Now I have one problem with colocasia: No one agrees into which category of geophytes they fall, causing me endless problems in mental filing. Where should I place these plants?

Many natives in tropical areas eat its taro root but what exactly are they eating? Are they eating a corm, a rhizome, or a tuber? I even found experts who used all these nouns in the same sentence when describing colocasia.

Consequently, I did what every defeated presenter does in these circumstances: I e-mailed major plant guru Tony Avent, owner of Plant Delights. Readers, Tony was great. In the first place, he mentioned that mine was an intelligent question (always soothing to one’s soul) before answering it.

In the second place, he told me there is no correct answer. Not only do they have the characteristics of both corms and tubers, but they can also spread via rhizomes (underground) or stolons (above ground). This is frustrating for those of us who like our horticultural facts to arrive in an orderly package.

The truth is that there is a lot of variation among colocasia. Some are more tropical than others so be sure to look at the gardening zones listed under each cultivar. For example, ‘Nancy’s Revenge’ does well in zone 8 but most likely will not return in zone 7.

Then decide whether you want the clumping or the running type. Clumpers will expand but will leave you some room whereas the runners can take over an area by spreading via their stolons or rhizomes.

The next consideration is size: Colocasia runs the gambit of eight inches to nine feet in height. For most of us in zone 7, the huge colocasias are a curiosity, as many will not reach their full height before the first frost hits – and most of us simply lack the room to show them off properly. Most of the Colocasia esculenta types fall in the three-to-five-foot range, a size that can fit into a medium-size garden.

The last consideration is color. Many are a lovely emerald green while there are some that are even black. Others come with white splotches on the green leaves. There is great variation among the leaves of different cultivars.

While colocasia have the reputation for wanting lots of water – I have even seen them growing in tubs of water at Montrose – I have found that they survive even during periods of drought. My C. ‘Ruffles’ didn’t even droop during the nine weeks we went without any rain last summer. I find if a particular cultivar is happy in the garden, that the best advice is to leave it alone. Consequently, I do not water or feed mine – and they seem to thrive despite this neglect.

Rest assured that there is a colocasia out there for almost everyone. And when someone asks you what type of geophyte it is, you can merrily say it’s a corm, tuber, or a rhizome — and no one will be the wiser.