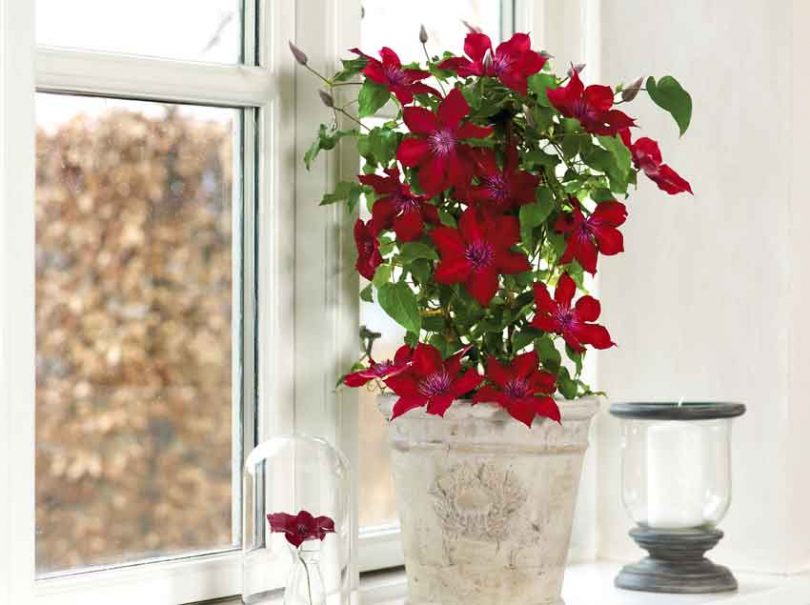 Few flowers are as evocatively beautiful as the big-flowered clematis hybrids. They combine elegant, showy form with a palette of Monet-like colors resulting in flowers rife with allure and charm.

Most gardeners know about the classic vines growing to about nine feet tall and which make excellent companions to climbing roses. But, we’ve all longed for shorter vines that we can grow up small trellises in containers on the patio or deck or scramble up the mailbox.

The Boulevard clematis hybrids are bred for compact, bushy habits, most grow to about 3-4 feet tall and feature sturdy stems that require little tying for support. They’re also known for long bloom times, a major bonus. Boulevard clematis were bred by master clematis breeder and horticulturist, Raymond Evison, who has bred over 100 varieties of clematis and whose clematis nursery on the English island of Guernsey remains one of the top producers of clematis vines in the world, producing up to 20 percent of the world market in clematis. 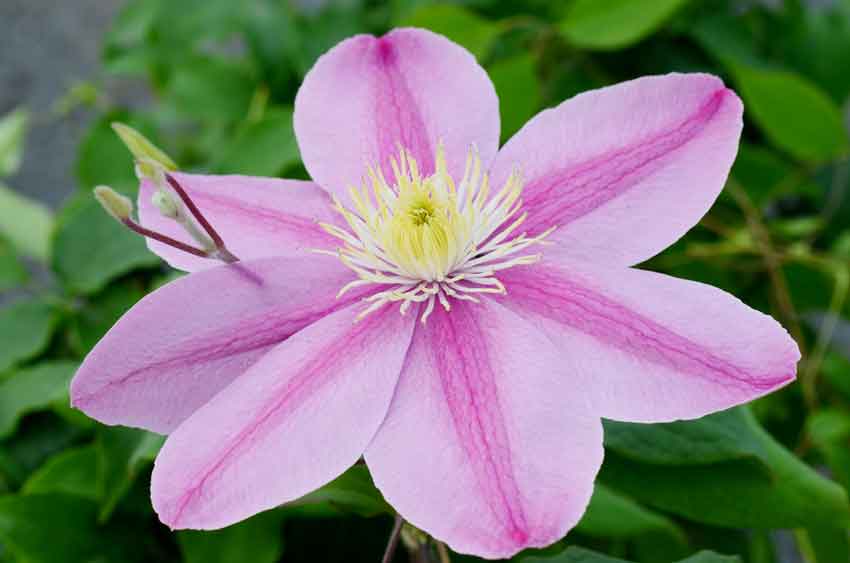 Besides long bloom times, you can expect prolific flowering from these vines since they flower along the stem as well as at the end of it. While you may see claims that they bloom from May to October, with our suppressive heat in this area of North Carolina it is more realistic to expect about three different bloom seasons in the year: early (around April), mid-season (around June), and late (somewhere from late summer to early fall).

Clematis are extremely cold hardy in our local climate zone, exhibiting vigorous re-growth in spring, and are generally easy to grow provided you observe a few protocols. They prefer a fertile, humus-rich soil that drains well. In the clay soil that most of us experience, be sure to amend with organic matter at planting. Dig a very wide, shallow hole, set in the plant, and re-fill it with a mix of 50 percent native soil, 40 percent soil conditioner, 10 percent cow manure, and a half-cup of horticultural lime. Unlike just about every other plant you can think of, clematis are one of the very few plants we encourage you to plant a little more deeply. You can go right up to and slightly above the crown when setting it in the soil. Each spring apply a complete, slow-release or organic fertilizer, and another dose of lime.

Clematis prefer to have their roots kept cool. In our blistering Carolina summers, you can fulfill that requirement by growing a groundcover over the root zone, placing some large flat rocks over it, or putting down a 3-4 inch layer of mulch. Clematis are not drought tolerant and need supplemental watering the first two growing seasons and during dry spells.

Now, let’s talk clematis wilt. It’s a disease. It’s very common, and, if you’re new to clematis, might make you think that your vine has turned brown and died. Well, the good news is that the Boulevard clematis have been bred to be resistant to this disease and also that you can usually cut back the browned stems and the plant will rebound. If you really want to be proactive, you can spray them at the base of the stems with fungicide in spring. Always cut away the diseased stems to help prevent spread and allow the plant to put energy into forming new stems. Too much fertilizer and getting the foliage wet when you water it will increase the likelihood of wilt disease.

Prune your Boulevard clematis annually down to about 6-inches tall in late winter to early spring—around late February. This pruning advice does not apply to all clematis.

Try growing three varieties together for an unbelievably stunning display of gorgeous bloom. Three-dimensional support such as a tuteur or obelisk frame would be excellent for this.

Tina Mast lives and gardens in Wake Forest, NC and is Communications Director for Homewood Nursery & Garden Center and can be reached at info@homewoodnursery.com.