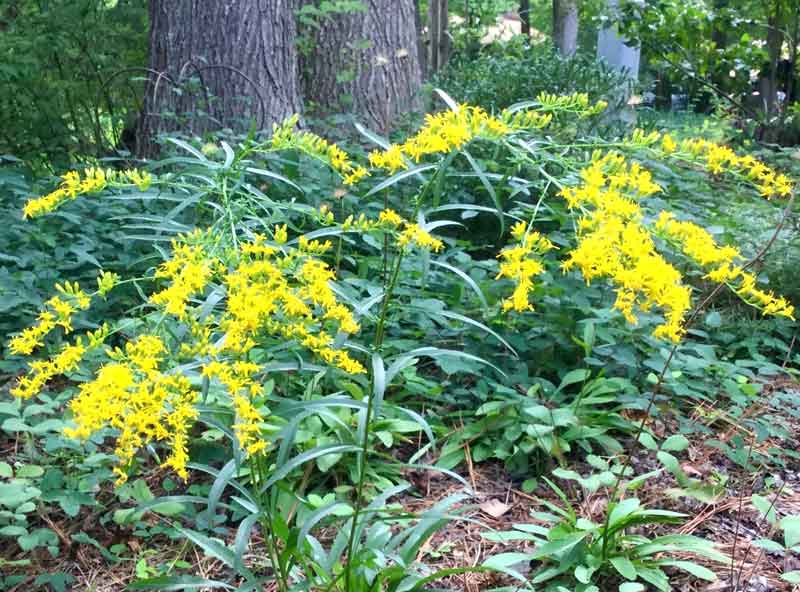 According to Aesop’s Fables, “a man is known by the company he keeps.” While there may be truth in the adage, guilt by association is not always fair or valid. In the case of goldenrods (Solidago spp) the proximity of its bloom time to that of another plant has led to near exclusion of this versatile wildflower from our gardens.

The bright golden wands of the approximately 100 goldenrod species native to North America begin lighting up roadsides and abandoned fields in July and continue well into fall. Unfortunately, these showy displays coincide with the flowering of ragweed (Ambrosia spp).

Ragweed’s inconspicuous flowers are wind-pollinated, which means they pump lots of allergy inducing pollen into the atmosphere. Goldenrod’s pollen is heavy, relying on insect pollinators to move it from flower to flower, so it is not a trigger for hay fever.

Not only do goldenrods not make us sick, since ancient times they have been used as herbal remedies to keep people well. The species name, Solidago, in Latin means, “I make whole.” The plant’s leaves and flowers have antioxidant, diuretic, and anti-fungal properties that continue to be studied.

Native Americans used goldenrod species for a variety of ailments. Sweet goldenrod (S. odora) was used to make tea and to flavor other more bitter remedies. They also used goldenrod flowers to make golden dyes and taught the plant’s many uses to colonial settlers. 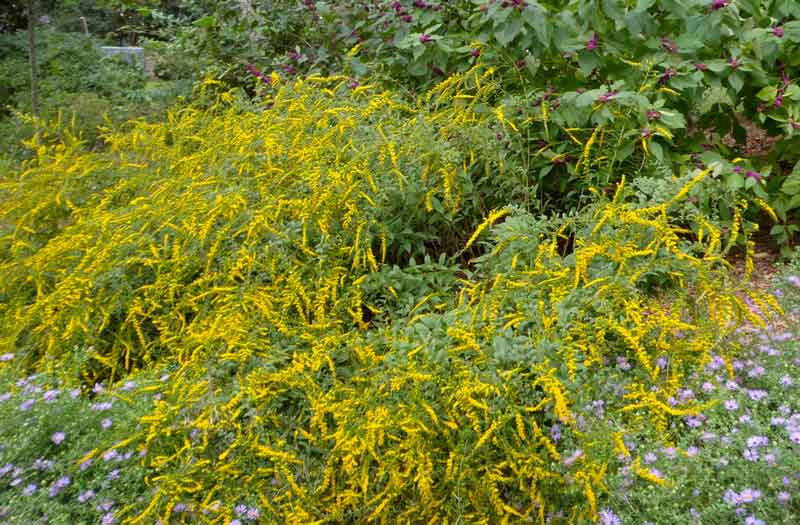 Goldenrods start flowering at the hottest point in summer just when many shrubs and perennials begin to slow down. The Xerces Society notes the critical significance of goldenrods to butterflies, native bees, and many of the predatory insects that prey on plant pests. Monarch butterflies rely heavily on goldenrods for nectar as they make their fall migration to Mexico.

While goldenrods are not the bad guys many have thought them to be, not all species are innocents that you’ll want to welcome in your garden. I learned that lesson the hard way when I permitted some Canada goldenrod (Solidago altissima) to establish itself in a meadow planting. The plants seemed harmless during the first season. However, by the second year deep-running rhizomes had created several large colonies that required a great deal of digging to remove.

Fortunately, a number of well-behaved goldenrod species and selections can play a vital role in the summer and fall garden when properly sited. William Lanier Hunt, first president of the North Carolina Botanical Garden Foundation and the garden’s original designer said, “Nature has provided a goldenrod for just about every type of place you can think of.” It is fitting that one of the best-known goldenrod cultivars, ‘Fireworks’ (Solidago rugosa), was discovered near Wilson, N.C. and introduced to horticulture by the botanical garden staff.

‘Fireworks’ performs beautifully in part to full sun. It will grow in just about any type of soil without fertilization. Growing goldenrods in leaner circumstances helps ensure they don’t become too much of a good thing. While not nearly as aggressive as Canada goldenrod, ‘Fireworks’ does need some room and is suited to large borders or as an edging plant in front of trees or shrubs. Goldenrods are good cut flowers for both fresh and dried arrangements, so gardeners worried about re-seeding may want to harvest the flowers. 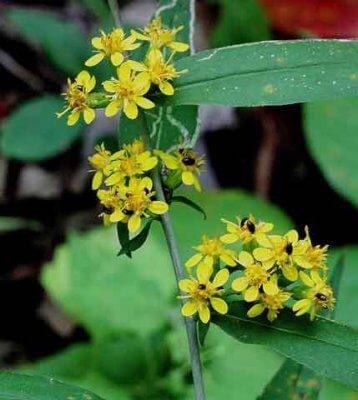 Another well-behaved selection, an autumn goldenrod (Solidago sphacelata), also hails from our state. Discovered as a chance seedling in a garden in Eden, N.C. and introduced by Delaware’s Mount Cuba Center, ‘Golden Fleece’ is a compact, elegant plant at home in the most formal of borders. The mounding foliage, an attractive presence all summer, is topped by twisted golden panicles late summer into fall.

Quite a few goldenrod species are “clumpers” rather than “spreaders,” and several do well in shade. Perhaps the most delicate member of the species and one of my favorites is bluestem or wreath goldenrod (Solidago caesia). Gray goldenrod (Solidago nemoralis) is another shade-tolerant species that provides graceful, arching wands of golden flowers summer into fall. Goldenrods are generally drought-tolerant, and deer have never browsed any of the goldenrod species I have grown.

The diversity and low maintenance requirements of goldenrods ensure there is at least one species for every setting. Those hesitant to open their garden gate to these bright beauties might want to reconsider. The birds, butterflies, and other insects they nourish will be very glad you did.