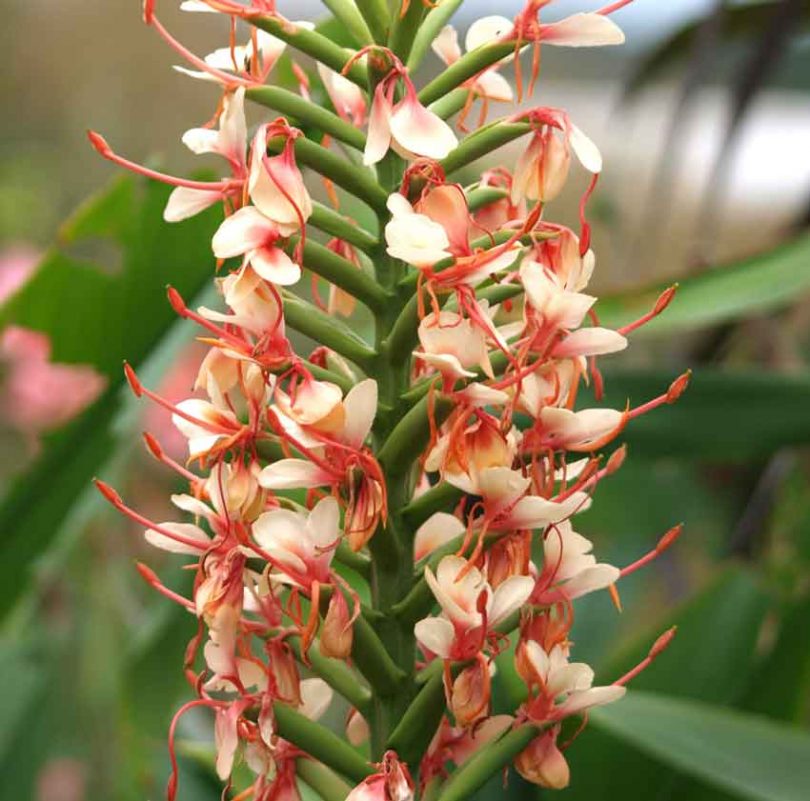 Few plants can bring a taste of the tropics to temperate gardens quite like ginger lilies or Hedychium. While they are neither true lilies (Lilium) or gingers (Zingiber), they are outstanding garden plants in the warm south.

Hailing mostly from Southeast Asia, the genus is comprised of around 80 different species, although plant breeding over the past 30 years has led to many hundreds of selections. The scientific name translates roughly to “sweet snow” a reference to the delightfully fragrant flowers of the white butterfly ginger, H. coronarium, a ubiquitous pass-along plant throughout the south.

While some ginger lilies from more tropical regions will not survive a central North Carolina winter, there are many species and selections that thrive here. They are quite distinct in the landscape where the upright stems, or to be botanically correct pseudostems, arise from thickened roots called rhizomes. Strappy leaves cloak the entire length of the pseudostems and many a new gardener has asked why would you grow corn in the garden. There is little chance of confusing a Hedychium with corn once it begins flowering in summer or early fall. Terminal, pine cone-flower spikes open to reveal fragrant flowers, at least in most species, in shades of red, pink, orange, yellow, and white.

How to Grow Ginger Lilies

Ginger lilies are easy to grow, appreciating rich, moist, and well-draining soil. They will tolerate drier conditions but flowering is reduced and plants often have a yellow tinge to the foliage in sunny, dry spots. With adequate moisture, ginger lilies will be fine in full sun but are often at their best when they have some protection during the hottest and driest part of the day. As an added bonus, they are quite deer and vole resistant and can be a great addition along the edge of a woodland.

Most of the hardy forms of Hedychium are wonderful garden denizens with a dramatic presence and very showy flowers. The underground rhizomes can spread to form sizeable patches, which can be allowed to continue to spread or dug, divided, replanted, and shared with friends. The division is best in spring after the new growth has started through mid-summer. Make sure to leave several of the pointed buds at the end of the rhizomes to ensure a quick and successful recovery.

There are quite a few ginger lilies available, especially from mail-order nurseries. Their quick growth and large root systems mean they can rapidly outgrow a nursery container and so are sometimes hard to maintain in a traditional nursery or garden center. Most people are first introduced to the genus when a gardening friend passes on a division of the gloriously fragrant white butterfly ginger lily, H. coronarium. 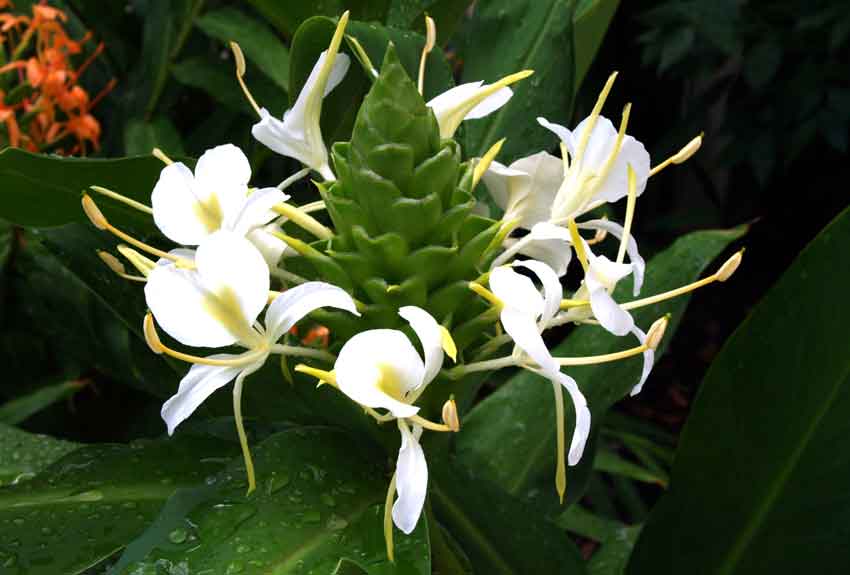 A favorite at the JC Raulston Arboretum is a hybrid with the butterfly ginger lily called ‘White Starburst’ whose stems grow to 6-feet tall and are topped starting in September by white flowers with a soft, yellow throat. Other great hardy ginger lilies include the 5-feet tall ‘Pink Princess’ with fragrant pink flowers and ‘Stephen’, a dwarf form of H. densiflorum. ‘Stephen’ grows only to about 4-feet tall with very narrow leaves and tight spikes of orange-yellow flowers beginning in July.

We grow a few gingers as much for their foliage as for the flowers. ‘Dr. Moy’, named for a ginger-lily breeder, has foliage flecked with white, especially early in the season. Late summer brings on luscious flower heads of soft peach.

A species we like with gorgeous foliage is H. greenei. This species is not always the hardiest, but some selections are fine in central North Carolina. Greene’s ginger lily has large green leaves with red backs for a dramatic display. It would be worth growing even if it didn’t have bright orange-red flowers. An unusual feature of this plant is that it will form plantlets at the base of its leaves, which can be removed and potted up to share or keep inside as insurance over the winter.