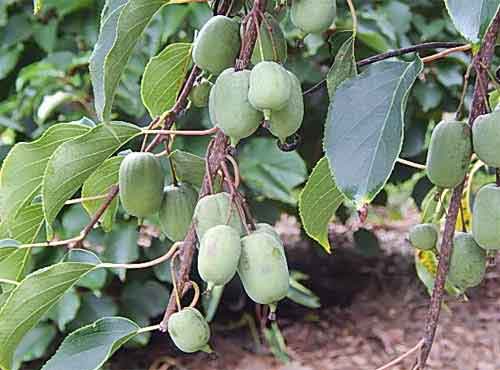 As a budding fruit grower with limited space, I’m very careful as to how I use my real estate. Since I’m also a wildlife gardener, none of my fruit can be sprayed; everything has to be disease resistant, or with problems the garden and I can tolerate.

The latest addition to my garden is the hardy kiwi. This kiwi is much different in appearance from the traditional fuzzy kiwi. Hardy kiwi is sweeter, grape-sized, and fuzz-less.

Since I’m so new at growing hardy kiwi, and frankly I didn’t know it existed before visiting my friend John Buettner’s garden, I reached out to John to share his expertise.

Hardy kiwi is an excellent choice for Triangle gardens. The vine is attractive, not fussy, and grows fast. Maybe too fast. According to John, “My only rule about kiwi vines is that you never go near them without pruners. They will take over the world if you let them ramble.”

Give it a lot of space. Hardy kiwi can grow 15-feet in one year. Try growing it over an arbor in a sunny location.

Fussiness is a term often used to suggest high maintenance, including spraying and feeding. Kiwis are not fussy. As John attests, “I have never sprayed my kiwi vines. Occasionally I will see some foliar disease and sometimes the fruit gets what appears to be sunburned on its skin, but those problems are very minor and not worth spraying.” John added, “I also don’t feed them a lot, maybe once a year when I’m feeding everything else in the garden. I use wood chips as the mulch under the vines, and it breaks down into compost which gives them a slow feeding over time.”

Hardy Kiwi takes time to produce fruit. I don’t expect to see any fruit from my fledgling plants for one to three years. But it will be worth it.

Like many fruits, hardy kiwi needs full sun and constant moisture to thrive, though it does not tolerate wet soil. Plant it in a full sun location with rich, well-drained soil. It will suffer in times of drought unless watered. Deer may browse the vine, but will soon it will be out of the deer’s reach.

For my hardy kiwi, I built a trellis from limbs after removing a crape myrtle tree. Soon it will be covered, creating a beautiful display on the south side of my garden.

Hardy kiwi will reach full-size by midsummer, but will not ripen to its full sweetness until late summer. To test, pick a few and allow them to ripen on a counter or on a windowsill for a few days. If the kiwi becomes sweet and soft, it’s time to harvest. To extend the harvest, store hardy kiwi in the refrigerator to keep them from ripening. Take out of the fridge to ripen as needed. In addition, hardy kiwis can be picked and eaten straight off the vine. Another tip from John, “They are sweeter if you wait until the fruit starts to wrinkle.”

Most hardy kiwis need a pollinator so I asked John about the ‘Issai” vines, known to be self-fertile, and do not require a male pollinator. “I did get a good crop of fruit from them,” John says. Even with this advice, I bought one self-fertile ‘Issai’, and a male and female just to be certain.

If you are a budding or hopeful fruit grower, starting with hardy kiwi is a good place to begin.