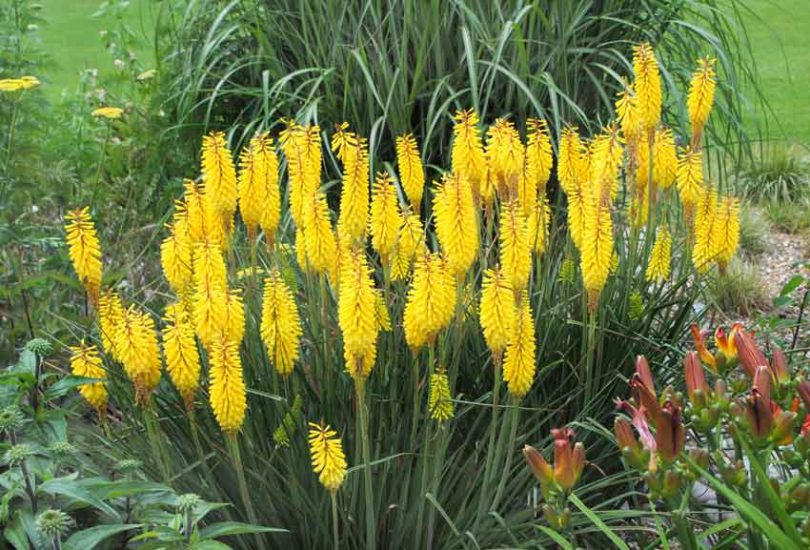 How many African plants are growing in your garden? Chances are, not too many. One African native deserves more use in today’s garden, Kniphofia or red hot poker. While these plants have been grown for years, new breeding has elevated Kniphofia to one of the easiest and finest plants for the sunny garden.

Kniphofia is a strappy-leave herbaceous perennial or stouter-leafed evergreen that ranges from Ethiopia to the southern tip of Africa. There are about 75 species ranging from rather diminutive 12-inch tall tufts to giant 8-foot monsters. 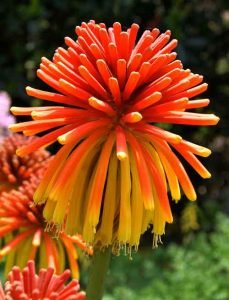 Most species grow in open sunny locations in relatively well-drained soil and bear bright yellow to orange flowers that give plants their common name of red hot pokers. Other species and hybrids may have green to creamy-white or tan flowers.

Several species can be grown successfully in North Carolina gardens and among the most commonly seen are K. uvaria, a larger, very cold hardy species growing to 4 feet tall with large, 8-inch spikes of flowers in late spring and early summer. Another, somewhat less hardy species, is the 3 foot tall K. rooperi that flowers in late summer into fall with squat, rounded flower heads. 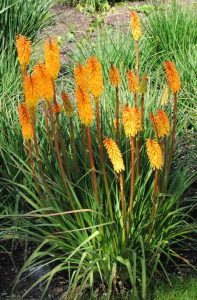 Hybrid pokers often have quite a complex parentage but can be knockouts in the garden. ‘Bee’s Sunset’ and ‘Sunningdale Yellow’ are two classic hybrids but newer selections like the Popsicle series (‘Pineapple Popsicle’, etc.) and the Echo series (‘Echo Mango’, etc.) have added longer or re-blooming characteristics to plants whose size are more in line with smaller gardens. Some seed-grown mixes like ‘Flamenco’ are also widely available.

Whether big or small, red hot pokers will add a bit of the exotic to the flower garden and with careful selection, you can have them in flower from May to October.

What About Its Name?

The plant is named for a man named Kniphof. As such it should be pronounced K-nip-hof-ia with a hard “k” to start rather than Nif-foe-fia.