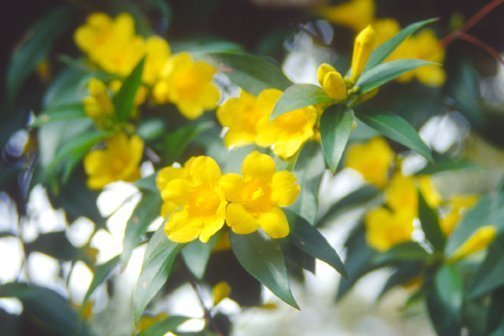 Movies set in the South often feature images of trees dripping with purple wisteria or the white and yellow flowers of fragrant honeysuckle. Ironically, neither of these plants is native to our region. Asian wisterias (Wisteria floribunda, W. sinensis) and Japanese honeysuckle (Lonicera japonica) were introduced to the U. S. in the early 1800s for ornamental use and erosion control.

Immediately popular, the vines were widely planted and soon escaped into fields and woods across the Southeast and beyond. Without natural predators in the existing ecosystem, exotic invasive species displace native plants, disrupting natural communities. Vines such as honeysuckle and wisteria choke out existing vegetation on the ground level and change the forest by girdling young trees.

Gardeners who admire these vines for their beauty and usefulness should be relieved to learn there are vines native to the Southeast that can perform the same functions without threatening the surrounding environment.

By March in the Raleigh area of North Carolina, the bright yellow flowers of Carolina jessamine (Gelsemium sempervirens) begin to appear in trees along woodland edges and often continue into May. A close relative, swamp jessamine (Gelsemium rankinii), lacks the fragrance of Carolina jessamine, but repeats flowering in fall. Readily available from nurseries and garden centers, the two species, which are very similar in appearance, are sometimes potted and sold together providing the benefits of both species.

Crossvine (Bignonia capreolata), another large evergreen vine, starts blooming just in time for the hummingbirds’ April arrival. The orangish-red flowers continue into May with some sporadic blooming later in the summer. Crossvine also shines in the winter garden when its foliage deepens to a dark purple color before greening back up in spring. ‘Tangerine Beauty’ is a frequently sold selection.

A nectar source favored by hummingbirds, coral honeysuckle (Lonicera sempervirens), flowers profusely in spring, then sporadically summer through fall. As the name suggests, the blossoms are typically red outside with yellowish interiors. Selections with yellow flowers including ‘John Clayton’ are also available. Coral honeysuckle’s flowers lack the intoxicating fragrance of the Japanese species, but the plant more than compensates by the benefits it provides to birds and other wildlife.

The flowers are followed by bright red berries that are eaten by a number of songbirds. Coral honeysuckle not only provides nectar and fruits, but it also serves as a host plant. I was alarmed one late summer when the honeysuckle at my mailbox was beset by caterpillars. My alarm turned to joy when I learned the caterpillars were the larval stage of the hummingbird clearwing moth — one of my most treasured garden inhabitants.

American wisteria (Wisteria frutescens) is similar in appearance to Asian wisteria but slower growing and easier to manage. Its flowers are smaller and less fragrant but are a deeper, more purple color. American wisteria also begins flowering at a much earlier age than its exotic cousins. Selections include ‘Amethyst Falls’ and a white-flowered form, ‘Alba.’ Duke Gardens celebrated the 75th anniversary of its Terrace Gardens by removing the iconic Chinese wisteria (W. sinensis) from its landmark pergola and replacing it with the American species.

While none of these natives are a threat in natural areas, using them successfully in gardens requires getting to know their habits and placing them accordingly. Poorly sited, some can become maintenance nightmares. Well-placed these vines can perform important functions in gardens providing color, nectar, and fast evergreen screening. Easy to grow, they thrive in average soil and tolerate drought once established. All of them grow successfully in full sun to part shade, but flower more profusely in sun. None are favored by browsing deer.

To provide a vine proper support, consider its mature size and climbing style. In the wild, jessamines and crossvine grow up to the top of the forest canopy in order to find sun and flower. Therefore, these large vines can create fast evergreen screens. Jessamine is a twining vine that can be trained to rapidly cover a chain-link fence. Crossvine attaches itself by tendrils enabling it to climb trellises and walls without assistance.

The smallest of these native vines, coral honeysuckle, matures at about 15 feet but can be pruned to maintain a lower height or more tidy appearance. A twining vine, it requires some training to establish on a trellis. Coral honeysuckle’s evergreen habit and compact size make it a popular vine for mailbox posts.

Neither coral honeysuckle nor the jessamines spread aggressively along the ground, so they are useful in mixed plantings. Some other native vines, including crossvine and American wisteria, spread rapidly by sending out runners. These runners can be easily removed or mowed if the vines are planted in open areas or on a wall without other plantings. However, using running vines in crowded plantings requires vigilance.

A crossvine we planted behind a shrub border on our back fence invaded the shrubs and overgrew a small dogwood before we knew it was happening. Now relocated to a free-standing trellis, it can be an effective screen for a utility area without encroaching on other plants. I’ve grown American wisteria in large containers, thereby eliminating problems with its runners.

The North Carolina Invasive Plant Council lists Japanese Honeysuckle and Asian Wisteria as pests in the Piedmont, Coastal Plain, and Mountains of our state. For additional information about these and other invasive plant species, visit their website http://nc-ipc.weebly.com/nc-invasive-plants.html.