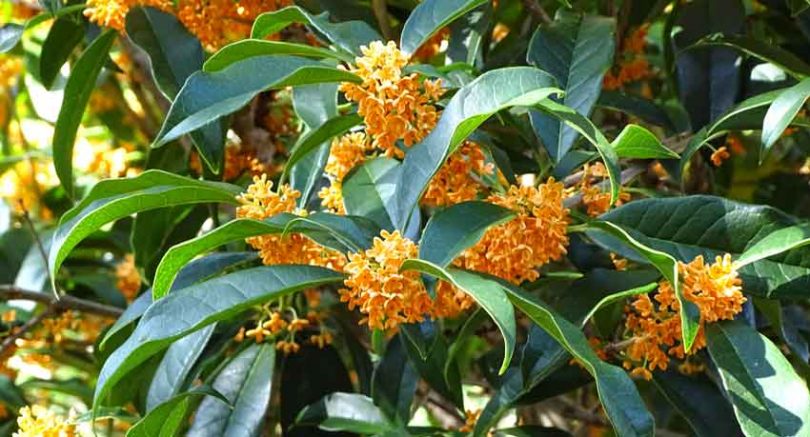 As a professional horticulturist, I have been asked throughout my life, “What is your favorite plant?” Early in my career, this seemed to be an impossible question. I was constantly amazed and intrigued by every new plant I saw. With age, I have finally realized that there is one plant that I would never consider gardening without – the fragrant tea olive or sweet olive (Osmanthus fragrans).

I have been known to say that areas too cold to grow sweet olive are not fit for human habitation, which may be hyperbole, but I certainly wouldn’t want to live there. Osmanthus, as a group and depending on your taxonomist of choice, includes about 30 to 36 species that are found mostly in southeast Asia, but also range into Malaysia, New Caledonia, and the southeastern U. S. As the common name implies, they are in the same family as true olives. All are evergreen trees or shrubs with 4-petaled flowers followed by a small, blue to purple olive-like fruit.

The fragrant tea olive or sweet olive, O. fragrans, is found over a wide range of the warmer parts of Asia where it can form a fairly large tree after a century in the ground. As we know it, this is an evergreen shrub with deliciously scented white flowers in fall. The sweet, slightly citrusy fragrance will waft on the breeze as much as 50 yards away from a flowering plant and a single specimen will fill a garden with its delightful aroma. The broad, green leaves provide an ideal backdrop for the flowers and hold up well through all but the coldest winters in the Triangle without any damage. It is a much-loved plant in Asia, and during the Mid-Autumn Festival is served in cakes, savory dishes, tea, and wine. On one memorable trip to an area just outside Chengdu in Sichuan, China, I met the self-proclaimed osmanthus king of China. For lunch, every single dish and drink was flavored with sweet olive including the “wine”, which could be used to strip paint, and the main entrée of a black snake with osmanthus jelly. 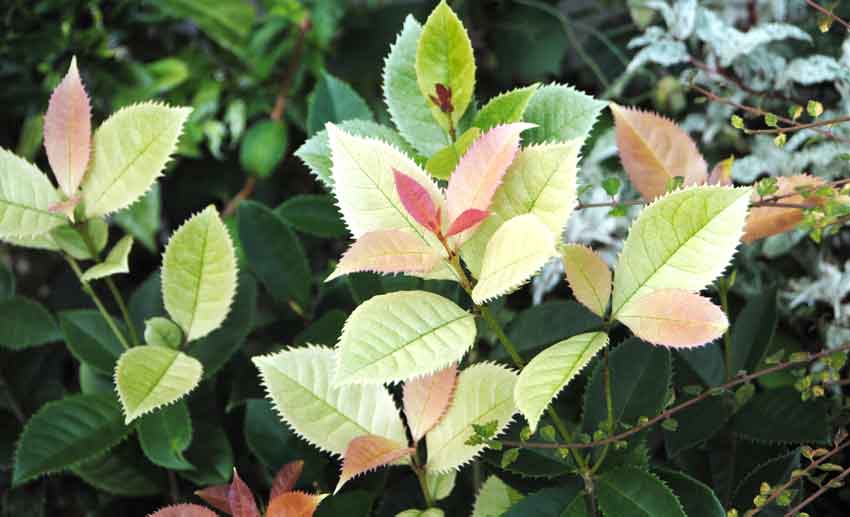 Among the showiest of the fragrant tea olives is one called ‘Fudingzhu’, which bears exceptionally large, supremely fragrant flowers on very young plants. There are also both orange (var. aurantiacus) and yellow (var. thunbergii) selections available as well. A new selection called ‘Qiannan Guifei’ introduced by the JC Raulston Arboretum to Western gardens has new foliage that emerges in spring bright fuchsia pink before turning white and finally green. Qiannon refers to the region in China where it originated, and Guifei to Yang Guifei, one of the four legendary Chinese beauties who lived during the Tang dynasty and was so beautiful she put all flowers to shame.

Somewhat hardier than the fragrant tea olive is the holly olive or false holly, Osmanthus heterophyllus, which hails from Japan and Taiwan. It is typically smaller than sweet olive, growing as a shrub although it can be trained as a small tree. The name “hetero” means different and “phyllus” means leaf, and refers to the fact that on young plants the leaves are spiny like holly but with age will lose the spines entirely. The fall flowers have a lovely fragrance and the smaller leaves give it a more refined look than O. fragrans.

A recent introduction called ‘Kaori Hime’, which translates to fragrant princess, has tiny leaves on a compact plant and will flower at a very young age. Several colorful leaf selections are also available including ‘Ogon’ with yellow leaves on a compact plant and ‘Purpureus’ with dark, purple-tinged new growth. Perhaps the most widely grown variant is ‘Goshiki’, which has leaves heavily speckled and splashed with creamy yellow-white markings. Another recent introduction is being sold as Party Lights with compact growth and coloration similar to ‘Qiannon Guifei’. 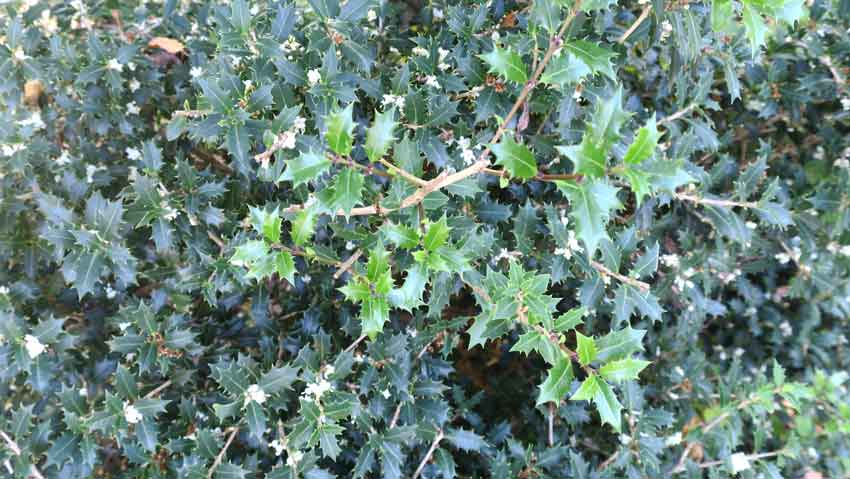 There are a couple of American species that are rarely seen in gardens. Our North Carolina native O. americanus is sometimes called American olive but is more usually referred to as devilwood. Recent genetic work indicates that it and a Florida relative along with a few Asian species may be separate from true Osmanthus and are now known as Cartrema. Whatever the name, devilwood makes a loose, open understory plant with fragrant white, spring flowers, although with age it can become quite handsome especially when trained as a tree. It is relatively rarely seen in the nursery trade.

Grow Osmanthus in full sun to part shade in average soil. They are easy, long-lived plants in the landscape, and many venerable specimens can be seen around old homes throughout the Triangle. Deer tend to stay away from Osmanthus. Most will prefer to be protected from cold, drying winter winds. The JC Raulston Arboretum in Raleigh grows about 50 different species and selections of Osmanthus, one of the largest collections in the United States.