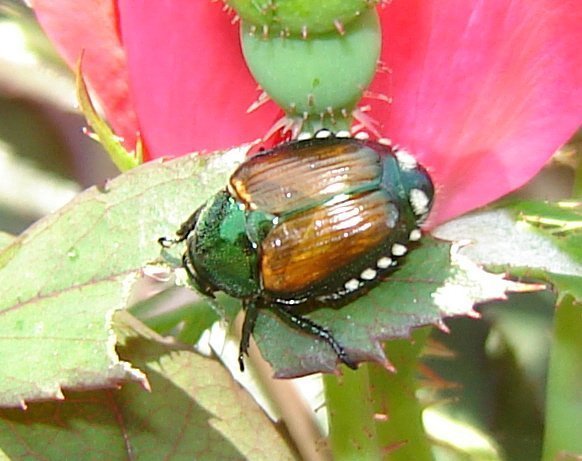 It didn’t use to be this way. The first detected Japanese beetle was found in the U.S. in 1916 in a nursery near Riverton, New Jersey. Today this beetle can be found in at least 30 states, and just two years ago, it showed up in Canada.

While so many people come and stay in North Carolina because of our (mostly) favorable climate, so does the Japanese beetle. Also, because of the availability of a wide variety of host plants and the lack of natural enemies to this beetle from Japan, they thrive here. Although the European starling is the best-known beetle-eater, we certainly don’t want any more of those either.

What Are Japanese Beetles?

The Japanese beetle, Popillia japonica, is a widespread and destructive pest of grass, landscape, and ornamental plants, such as roses, crabapple, apple, Japanese maple, crape myrtle, and pin oak, as well as cherry, plum, and peach trees.

Adults emerge from the ground and begin feeding on plants in June. Activity is most intense over the four to six weeks beginning in late June, after which the beetles gradually die off. Individual beetles live about 30 to 45 days.

Japanese beetles feed on about 300 species of plants, devouring leaves, flowers, and overripe or wounded fruit. They usually feed in groups, starting at the top of a plant, working downward. The beetles are most active on warm, sunny days, in direct sunlight. A single beetle does not eat much; it is group feeding by many beetles that results in severe damage.

The adults are generally metallic green, with bronze or coppery-brown wing covers leaving part of the abdomen to show. The five patches of white hairs on each side of the abdomen, and one pair on the last abdominal segment distinguish Popillia japonica from all other similar looking beetles.

This description—metallic green, coppery-brown wings with a bit of the abdomen showing—is reminiscent of the vintage Coppertone suntan ad with a puppy pulling down the bathing suit pants of a surprised browned toddler at the beach. Not so!

Egg-laying begins soon after the adult beetles emerge from the ground and mate, then females leave the plants in the afternoon, burrow two to three inches into the soil, and lay their eggs. Each female can lay a total of 40 to 60 eggs during her lifetime.

For the next ten months, the developing beetle lives in the soil as a white larva, or better known as a grub. I’m sure you’ve seen the grubs. White, C-shaped caterpillars are visible in my garden anytime I sink a shovel.

Pupation takes place within an earthen cell formed by the last larval instar. Its color ranges from pale cream to metallic green depending upon the age.

In summary, enjoy your summer and make controlling Japanese beetles a hobby, not a vendetta. Bathing suit optional.

How to Control Japanese Beetles

Control efforts need to address both adult and larval populations through an approach that integrates the following methods:

Make it your morning and late evening ritual to handpick Japanese beetles from your plants if you can reach them. During these hours, the beetles are less alert and slow. They can be squeezed to death (very satisfying, indeed) or dropped into soapy water.

This next approach is for those with patience, which is hard to have when it comes to this destructive pest. You won’t get immediate gratification as from above, but perhaps you’ll be better off next year. Adding beneficial nematodes to your ground areas kill immature stages. These microscopic, worm-like parasites actively hunt, penetrate, and destroys grubs in the soil. Apply in spring before the beetles emerge. You will have even better results with a 1-2 punch by also adding Milky Spore, Bacillus popilliae, a naturally occurring host-specific bacterium that attacks the destructive white grubs in turf. Even if you use Milky Spore and beneficial nematodes, you can still have Japanese beetles. Nothing is full-proof; if it were, Japanese beetles wouldn’t be a problem.

Commercially available Japanese beetle traps can be useful but have been proven to lure more beetles and result in more substantial damage.

For your roses, there is a practice called “keep them in the green.” Cut your colorful roses and bring inside during the Japanese beetle season. Sorry, this is still not full proof, but your house will look fantastic.