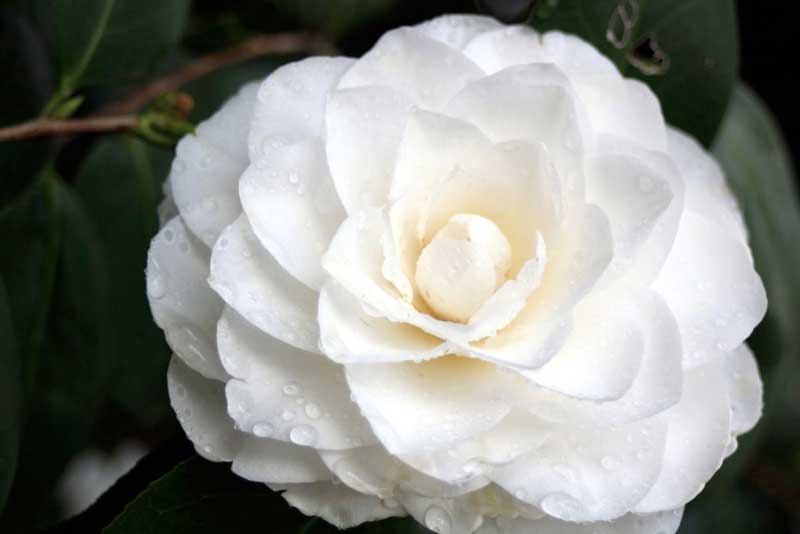 Camellias have long been a symbol of southern garden traditions. First introduced to the United States in the late 1700s, you can find camellias growing in old homesteads throughout the southeastern region. Even in modern landscapes, camellias prove to be worthy specimens due to their evergreen foliage and intricate flowers that bloom through the cool season.

As a former propagator and grower of camellias, my admiration runs deep. Initially I focused on “new” varieties—cultivars bred and selected from 1960 to present day. Many of these are considered “show flowers”—meaning members of the American Camellia Society grew them. Though there are many wonderful selections available—over 20,000 registered—I was always curious about the origins of this Asian native plant and the tales of its journey around the globe.

The story of camellias started around 2737 BC. It is said that while the servant of Chinese emperor Shen Nung was boiling water to drink, leaves blew in from a tree overhead. An herbalist, Shen Nung took a chance and sampled the infusion. What he experienced was the first recorded caffeine buzz in human history.

The tree whose leaves provided this boost of energy was Camellia sinensis, quickly revered for its medicinal qualities. Tea became established as the national drink of China during the Tang dynasty (618-906 AD.) Buddhist monks traveling through China brought seeds, plants and rituals back to Japan, where the tea ceremony became a vital aspect of Japanese culture.

It would take centuries for Europeans to discover the joys of drinking tea and ultimately change the world as their addiction grew. Dutch traders who had over taken Portuguese trading routes were the first to commercially import tea into European markets in the late sixteenth century.

The Dutch East India Company quickly grew to dominate global trade. Europeans were skeptical of the “China Drink,” so traders turned to royals and aristocracy to help popularize the warm beverage. The marriage of Charles II to Catherine of Braganza of Portugal ultimately shaped the history of tea drinking in Britain as her love of the drink established it as a fashionable beverage first at court and then among the wealthy classes. The first 100 pounds of imported tea arrived in Britain in 1664 and by the mid-1700s tea was the drink of choice by the masses and remains, second only to water, as the world’s most popular beverage.

The U.S. Role in Tea

In 1848 botanist Robert Fortune made a famous journey “undercover” to collect tea plants, seeds, and knowledge from various regions in China. He shipped 20,000 tea plants to India, which were tested in gardens from Assam to Darjeeling. Fortune went back to China searching for tea, sponsored by the U.S. government in 1853 and 1856. His efforts were met with challenges, as Chinese officials sent him off with thousands of seed from the ornamental species, Camellia japonica and Camellia sasanqua. Difficulty in establishing tea plantations in Europe and the southern colonies hindered the creation of an American tea industry. With the start of the Civil War, efforts ceased entirely. Today, India remains the leading source of tea globally.

One successful U.S. commercial planting of tea remains, established by the Lipton Tea Company near Charleston, SC. This plantation is still in production as the only commercial tea producer in the U.S., now named Charleston Tea Plantation. Located on Wadmalaw Island, its grounds include 127 acres of tea plants, a working tea factory and a gift shop.

Camellias in the Landscape

It was the Japanese who popularized ornamental camellias. Higo camellias, which resemble the flower of Prunus mume, were cultivated in the age of Samurais. Considered to be “Not a plant, not a flower, the Higo is an emotion” the unique flowers have a single ring of petals dominated by large pollen rich stamens. The name Higo refers to the ancient homeland, now called Kumamoto, situated in the southwestern tip of Japan. There are more than 300 varieties of Higo camellias in cultivation today, each with a unique history dating back over a thousand years.

The Japanese also introduced many classic varieties that are still popular today, including ‘Otome’ (often sold as ‘Pink Perfection’) and ‘Akashigata’ which is commonly referred to as ‘Lady Claire’ in the U.S. It was the beauty of these varieties that caught the eye of Engelbert Keampter, chef surgeon for the Dutch East India Company, who is credited with introducing ornamental camellias to Europe in 1692.

Camellias were considered flowers of society and were cultivated exclusively in conservatories for more than one hundred years. It was discovered, however, that they were much hardier than originally thought and were planted outside in coastal regions, creating a booming cut flower industry. On the first day of January 1888, 120,000 camellia “buttonholes” grown in Nantes, France, were sold at the Halls of Paris. Fashionistas like Gabrielle “Coco” Chanel were charmed by their beauty and adopted the camellia bloom as symbol of everlasting love and devotion. To this day, Chanel showcases the pure white formal double flower of ‘Alba Plena’ in its designs.

Camellias in the U.S.

The first camellias arrived in the colonies in 1792 and became a flower of high society, grown by only the wealthiest families with vast estates and conservatories. Many of these varieties were imported from France, Portugal and Italy and reflected the styles of the time: candy striped petals, formal double patterns and large flowers. Cultivars like ‘Bella Romana’ and ‘Ville de Nantes’ were highly prized and sold for outrageous sums of money. To this day, their showy flowers stop passersby in their tracks and led to my affinity for heritage camellias. It was the beauty of ‘Roma Rissorta’ that inspired me to find original plantings and gather cuttings. During that trip, my now husband proposed. We were married just steps away from the magnificent specimen and it will be forever part of our story.

In the post Civil War era southern plantation owners turned to ornamental camellias as a means of earning income. Under the guidance of Reverend John Drayton, Magnolia Plantation would recover from the Civil War by developing the grounds as a public garden and nursery in 1870. Over the following decades Magnolia introduced 150 cultivars and assembled the largest collection of camellias in the U.S. It is from the immense collection at Magnolia Plantation and Gardens that I propagate these living pieces of history so that gardeners can enjoy the beauty of the past.

Varieties such as ‘Captain Martin’s Favorite’, a beautiful pink formal double flower, showcase the longevity of the plant while intriguing visitors with its story. Captain Martin was a riverboat captain on the Ashley River, the lifeblood for receiving supplies from Charleston. He admired a particular seedling situated along his walk from the river to the main house. Occasionally he would stuff a flower or two in his top hat to surprise his wife. One day the lady of the house, Mrs. Julia Drayton, came upon him. He tipped his hat and the blossoms tumbled out. She was charmed by his adoration of the flower and thus named the plant in honor of him.

Across the world plants offer unique and meaningful histories that represent the always-evolving capacity of life on earth. As gardeners we have the opportunity to learn more about the stories behind our favorite varieties and preserve them for generations to come. The intrigue of camellias is truly boundless, as they are plants of immense beauty, utility and ecological significance.

To learn more about heritage camellias plan a visit to Magnolia Plantation in Charleston, SC during the bloom season of November through March. Known internationally as “America’s Romantic Garden,” Magnolia has over 20,000 camellias planted on the sprawling grounds.

Camellias are well suited for the southeastern climate of USDA Hardiness Zones 7-9. They prefer moist, well-drained acidic soil. Camellias are very sensitive to “wet feet” so be sure to amend heavy clay soils with organic matter to enable better drainage. The addition of ground pine bark is recommended, as camellias prefer acidic soil. Protection from cold winter wind and sustained temperatures below 15 degrees is needed. Site camellia plants in a location with winter shade and morning summer sun. Protect from grazers, including deer, by caging or spraying plants with repellent. Prune shortly after blooming season ends, as buds develop on new growth. Fertilize in spring and fall with an organic formula for acid loving plants.

Brie Arthur is an author, horticulturist and international speaker living in Fuquay-Varina, NC. She enjoys sharing her knowledge and love of camellias, produces heritage camellias in her backyard greenhouse and offers them for sale at select venues. For more information visit BrieGrows.com or email [email protected]