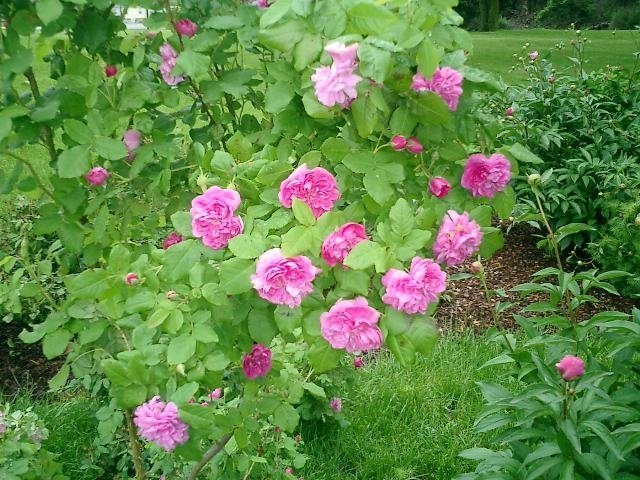 Most gardeners think of their little plot of earth as hallowed ground, but the volunteers at the Old Rose Garden at the Ben Lomond House in Prince William County, Virginia, know that theirs is indeed a sacred place.

Just two miles from the site of the first and second Battles of Manassas during the Civil War, the Ben Lomond house was used as a field hospital by both Union and Confederate troops.

Half of the 20,000 visitors a year come to tour the historic house and 19th century buildings on the grounds.  The other half come for the garden filled with historic roses.

The Old Rose Garden was originally planted and maintained at a large estate in Manassas called Smitherwood. But in 1995, when the estate’s gardener became ill, the nearly 200 rose shrubs were donated to the local Lake Jackson Garden Club.  In 1997, the garden club moved the roses to their present home on the grounds of the Ben Lomond Historic Site, where it is maintained by the Prince William County Park Authority.

All of the roses in the garden are from the past and the majority date from the 19th century or earlier. It’s regarded as one of the largest public gardens devoted to old roses in the U.S.  A few varieties were introduced as early as the 1500s, such as the ‘Rose of Lancaster’ (Rosa gallica officinalis)  and Maiden’s Blush (Rosa alba).  The American Beauty (Rosa meidaud) is the most popular in the garden.

The 5,200 square-foot rose garden is laid out in the traditional French style with its symmetrical and geometric design.  It contains174 plants that survived the move and a bout with rose rosette disease and black spot.

The county is fortunate enough to have a horticulturist and historical interpreter to oversee the care of the Old Rose Garden.  Becky Super stepped into that role in October 2008, and one of her first projects was to work with volunteers to improve the condition of the compacted soil by removing old mulch and adding more manure. She also has spent much of the winter cataloguing the cultivars in preparation for interpretive signs and booklets for self-guided tours of the garden.

Super’s goal for this upcoming blooming season is also to take stock of the companion plants in the garden and make additions or changes such as adding in more Cleome and Berginia Cordifolia in keeping with the historical perspective of the garden.

She welcomes visiting gardeners, and specifically rosarians, to stop by the garden to pitch in and help weed and maintain the historic roses.  She also welcomes donations of companion plants.  For details on visiting or to help with weeding or other volunteer work at the garden, call (703) 367-7872.

Diana Lambdin Meyer is a freelance travel writer who enjoys writing about and visiting gardens, farmers markets and other places where Mother Nature abounds.  Read can read her weekly blog for “stories behind the stories” at www.dianasdestinations.wordpress.com