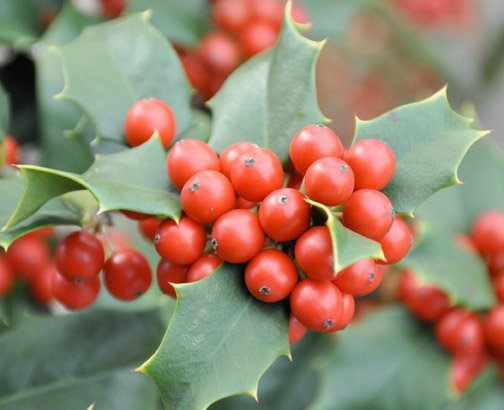 Late fall is a great time to think about hollies, whose iconic sprigs and berries prompt thoughts of the holiday season.

I remember going into the woods as a child to collect a few sprigs of the native American holly (Ilex opaca).  We would place the berry clusters amongst garland and around brass candlesticks. American Holly is still one of the best choices, and there are so many cultivars to choose from. But there are many other hollies with a bolder and more varied look for garden-grown decorations.

Dwarf Chinese holly (Ilex cornuta ‘Burfordii Nana’) is covered in red berries. Another native is the Yaupon holly (Ilex vomitoria), which has a more delicate appearance with small red berries and leaves. Some hollies even have cream-edged variegated foliage; these are typically the English holly (Ilex aquifolium). The variegated forms of English holly are enticing, but they don’t grow well in Piedmont soils. They fare better in a container or when grafted to a proven performer such as the Nellie R. Stevens holly (Ilex ‘Nellie R. Stevens’). 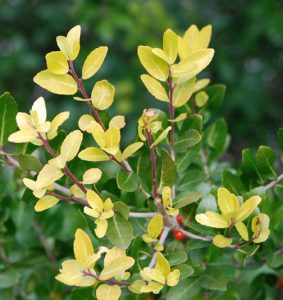 Some people prefer the long, leafless branches of the deciduous hollies such as Possumhaw holly (Ilex decidua) and Winterberry holly (Ilex verticillata). These native hollies also benefit wildlife. I recommend Sparkleberry holly (Ilex ‘Sparkleberry’) for its amazing show and the berries’ endurance.

Topiaries can be fun, too. I have seen geometric shapes, giraffes and even elephants created with everything from rosemary to boxwood, with the larger made from arborvitae and holly.

A commonly used landscape shrub is the dwarf Japanese holly (Ilex crenata ‘Helleri’), which is great for making little round “gum drops.” One of my favorites for its handsome pyramidal habit is Satyr Hill holly (Ilex opaca ‘Satyr Hill’). The variegated English holly (Ilex aquifolium ‘Argentea Marginata’) can also be shaped into a spiral or conical habit easily for winter interest.

For more on how to prune and train topiary, I recommend “Illustrated Practical Encyclopedia of Pruning, Training and Topiary” by Richard Bird.

All of these hollies will provide gardeners with year-round interest, and evoke thoughts of the holiday season.