There are several reasons to take the time to calibrate your fertilizer spreader before applying fertilizer:  economics, environment, and plant health. 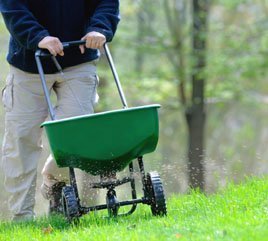 Calibrating a fertilizer spreader is the process of measuring and adjusting the application equipment in order to make it more accurate.

There are two common types of fertilizer spreaders: rotary spreaders and drop spreaders. Drop spreaders have a uniform pattern within the swath of application, low drift potential, and precise control of the edges of the patterns. Because the edge of a drop-spreader pattern is abrupt, even a small error in steering will result in untreated or over-applied strips. Rotary spreaders cover a wider area faster and are preferred for larger areas. Steering errors also are less critical. Compared with drop spreaders, rotary spreaders are easier to push, have better ground clearance, and are not as easily knocked out of calibration.

The different spreader types require a slightly different method of testing calibration. A quick summary of these methods is below. A more detailed explanation and examples can be found at www.turffiles.ncsu.edu/PDFFiles/004613/AG628CalibrationofTurfgrassBoomSprayersandSpreaders.pdf.

Pan Method
Drop Spreader – Make a small test run on a flat, clean, paved surface, and observe the distribution pattern. Any unevenness may be due to clogging of the openings in the bottom of the hopper or agitator malfunctions that will need to be corrected.

Rotary Spreader – The preferred method for checking the distribution pattern of rotary spreaders involves laying out a row of shallow boxes, trays, or pans on a line perpendicular to the spreader’s direction of travel. Make at least three passes over the boxes to obtain an accurate distribution pattern. Ideally, the content of the boxes or trays peaks in the center and descends evenly on each side.  If not, follow the manufacturer’s recommendation on pattern adjustment.

Sweep and Weigh Method
Drop Spreader – Apply the product to a smooth, clean surface, such as cement or a plastic tarp, then sweep and weigh the material and determine if the correct amount was applied according to the manufacturer’s suggestions. Adjust the gate opening based on the amount of product used in the test.

Rotary Spreader – The easiest way to check the application rate of a rotary spreader is to load the spreader with a weighed amount of product. Rely on your experience with the spreader to select a test setting that will deliver one-half the labeled rate. Apply the material over a measured distance, and then weigh the product remaining in the spreader to determine the rate actually applied per 1,000 square feet. Adjust the gate opening accordingly.

Catch Pan Method
Drop Spreader – Attach a catch pan or small section of gutter with end caps that is wide enough to capture all the granules leaving the bottom of the hopper. Measure a straight test course that will give the equivalent of 100 square feet. Place some product in the hopper and push the spreader over the test course. Remove the captured material and weigh it in ounces or grams using a digital scale. Compare the rate delivered by the test run (your application rate) with the label rate. Adjust the gate opening.

Rotary Spreader – It is more difficult to use the catch pan method on a rotary spreader.

Fertilizer spreaders are used for multiple applications including spreading of seeds, lime, and pesticides. Prior to calibrating your spreader, make sure that it is clean and in good working order. When using the spreader make sure the distribution lever is closed before filling the hopper. Don’t overfill the hopper and make sure the filter is in place. Push the spreader as close to the calibrated speed as possible and only open the spreader lever after you have begun walking, closing it before you stop.

Byline:
Michelle Wallace is the Consumer Horticulture Agent for the N.C. Cooperative Extension Service in Durham Co. If you have general garden questions, contact the Durham Extension Master Gardeners at 919-560-0528 or email them at mastergardener@co.durham.nc.us. Check out the new website at www.ces.ncsu.edu/durham/gardener/.