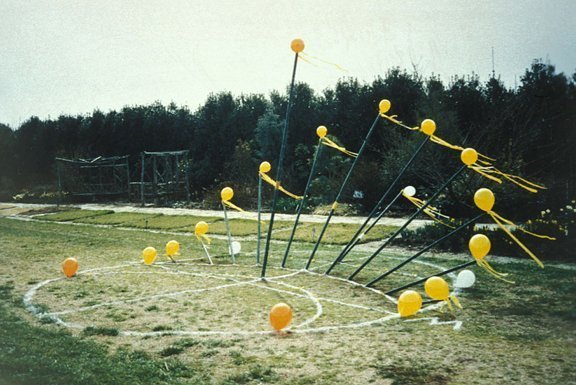 Whether you’re siting a new home to be built, trying to determine where to best locate a vegetable garden, or choosing which plant might work best in any given location, it is critical to know how much sunlight a particular spot receives, both in the summer and in the winter.

Most people understand that the sun rises in the east and sets in the west. But knowing how the sun moves through the seasons allows for a greater understanding of how to best utilize a piece of land.

The Earth’s seasons
The central axis of the Earth, or the pole around which the Earth rotates, is tilted off center at an angle of 23.5 degrees. This constant tilt gives us our seasons, with the Earth tilted away from the sun in the winter, and toward the sun in the summer.

The variation in the angle and duration of the sun on any given location depends on the latitude (above and below the equator). In Nome, Alaska, which is far north at 64 degrees 30 minutes north latitude, the sun barely sets in the summer while barely rising in the winter. For those living on or near the equator, 0 degrees latitude, days and nights are dependably about the same length, around twelve hours for each.

The Earth’s movement around the sun 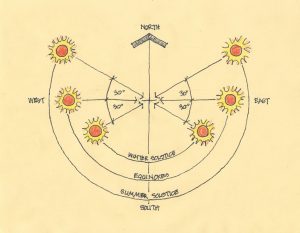 For the mainland United States, the sun will rise and set at about 30 degrees north of the east/west (E/W) horizontal axis at the summer solstice (approximately June 21). This is the highest point of the sun’s path for the whole year. At the winter solstice (approximately December 21), or the lowest point of the sun’s path, the sun will rise and set about 30 degrees south of the E/W axis. True to its name, at the two equinoxes there is equal day/equal night (approximately March 21 and September 21 respectively) so the sun rises and sets due east and due west. (See Fig. 1)

One can use a compass to determine the approximate direction of south, the general location of the sun in the northern hemisphere, but because of the magnetic variances, it is often useful, or at least more fun, to determine true solar south for your site. An easy way to do this is to set a stake or piece of rebar in the ground, using a level to ensure that it is straight up and down, or plumb. Then, on a sunny day, look up the times for the sunrise and sunset, and divide that time in two, thus determining the halfway point or apex of the sun’s path. The shadow cast by your stake at that time will be pointing due solar north, with due solar south being exactly the opposite direction. 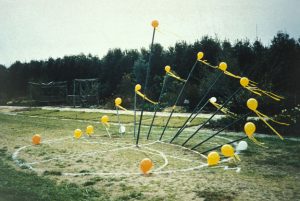 This method was used to begin the process of drawing the sun diagram in Fig. 1 and is represented in a sculpture by the author called, “Shadow Dance” (Fig. 2). The orange balloons show the location and angle of the sunrise, noon, and sunset at the summer solstice, the yellow balloons show each hour of the sun’s angles on the equinox, and the white balloons indicate the location and angle of the sun on the winter solstice.

Calculate the angle of the sun
It can be important to know what the angle of the sun will be during the various seasons, and this can be accurately determined for any location on Earth. The way to do this is to use the latitude and the tilt of the Earth to calculate the angles. Using North Carolina as the example, which averages a north latitude of 36 degrees, subtract that figure from 90 degrees, with the latter angle being the angle at which the sun would hit the Earth if our rotation axis were straight up and down (90 degrees – 36 degrees = 54 degrees.) This figure is the angle or altitude of the sun above the horizon at solar noon on the equinox. 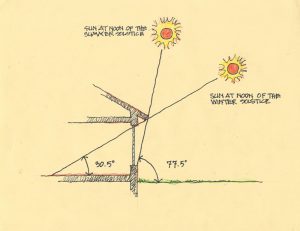 To calculate the altitude of the sun at noon of the summer solstice, add the tilt of the Earth, 23.5 degrees, to the 54 degrees to get the angle of 77.5 degrees.

To calculate the altitude of the sun at noon of the winter solstice, subtract the tilt of the Earth from the 54-degree angle, giving the low angle of the sun of 30.5 degrees above the horizon.

This information is useful in determining shadow patterns (See Fig. 3), both to moderate the temperatures inside your house as well as to calculate how long a shadow will be thrown by a house or tree. This information can be used in deciding where to locate a garden bed or specific plant.

Final Steps
Now you have the math to make these calculations. But the first and most important principle of good gardening practices is observation. Just observing your property to see where the sun falls at various times during the day and through the seasons will give you the information to make these decisions. But understanding how, why, and where the sun moves through the sky is fun and a foundation for explaining what you are observing. Enjoy this solar path to understanding.

Will Hooker is an Emeritus Professor, NC State University. He is also a landscape architect and a sculptor.