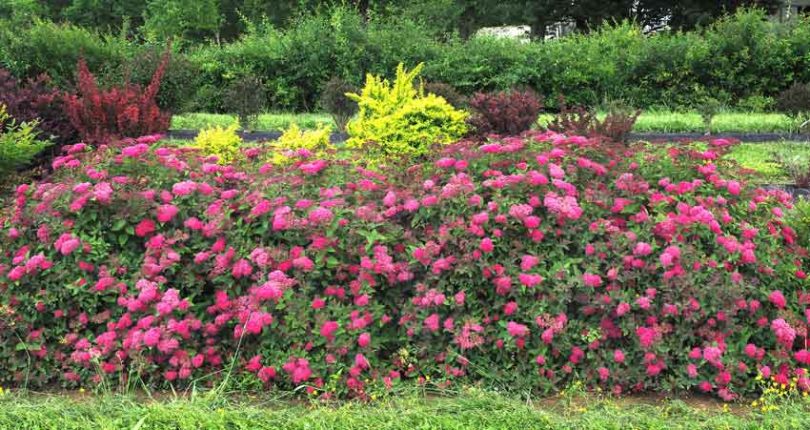 Take a tour around an old homestead in spring and odds are good you’ll see the airy white sprays of bridal wreath spiraea (Spiraea vanhouttei). While beautiful, the large shrubs with one good showy season went out of favor after a century or more of use. In the late 1980s, spiraea came back in style as some lower growing species like S. japonica and S. bumalda became popular with their dense mounds of foliage and pink flower clusters often over bright chartreuse foliage.

Just like fashion, spiraea is poised to make a comeback as new selections enter the marketplace. Recent breeding has combined great disease resistance with nearly sterile flowers opening the door for a spiraea renaissance.

For those who appreciate a lot of oomph to their shrubs, there is a shockingly bright new selection called Candy Corn (S. ‘NCSX1’) which produces rosy red new growth which fades to orange and finally pineapple yellow. The three-toned display is certainly reminiscent of its high fructose namesake. If all the foliage color wasn’t enough, waves of showy purple-pink flowers cover the bright foliage starting in late spring.

If you prefer a slightly more restrained display in the garden, Double Play Doozie (S. ‘NCSX2’) may be more your style. Spring foliage emerges a rich red and then is topped from late spring through much of the summer with deep, purple-red flowers.

All spiraea tend to be deer resistant and while showiest in plenty of sun, will tolerate a surprising amount of shade. They need little care to stay beautiful and a light trim after the first flush of flowers will keep them dense and compact to about three feet tall and wide.

While your bell-bottoms probably won’t come back in style anytime too soon, some of the new selections of spiraea will keep your garden fashion-forward while paying homage to a classic landscape standby.