Times have changed since the romantic adventures of the 19th and early 20th century plant hunters when it was easy to discover new plants. Nowadays you have to get well off the beaten path to find the more unusual plant species. 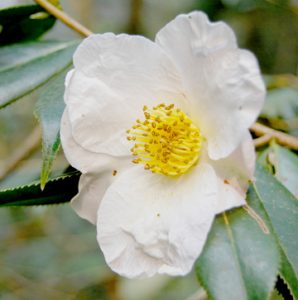 I recently traveled with a group to Hunan and Guizhou provinces in China for my own plant hunting—wild camellias. This area of China has rugged terrain although the mountains are similar in elevation to the Appalachian Mountains. The steep hillsides are terraced and managed for production of various crops. From the car it looked like every bit of land is being used, and forested areas are very rare. One common crop, Camellia oleifera, was blooming, so we certainly saw lots of camellias almost every day. Camellia oleifera is used to produce a high-quality seed oil for cooking and cosmetics.

But our group was searching for Camellia pitardii and some related species in an effort to sort out the taxonomic relationship of wild populations. My dad, Dr. Clifford Parks, led us with the help of several Chinese collaborators to numerous sites where these plants had been collected before. 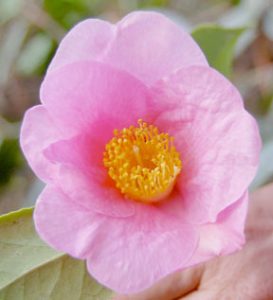 One of the most exciting sites we visited was a village located at the end of a long trail best accessed by four-wheel drive, where we had to wait while logs were unloaded from a horse. The village leader took us to a hillside where a single Camellia magniflora tree was growing. Although it had not started to bloom there were numerous seed pods on the ground, which had us jumping up and down with excitement because seeds are much easier to import than plants or even cuttings. Further up the valley we were shown a cluster of these camellias where the villagers had cleared away the brush, hoping to use these camellias to make money from tourism. 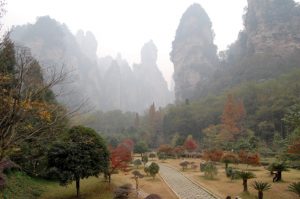 Our next stop was another exciting site, Zhangjiajie, where parts of the movie “Avatar” were filmed. This is a UNESCO World Heritage site with hundreds of unique sandstone pillars rising up to 1200 feet above the valley floor. As a protected park the flora is somewhat preserved, although a significant number of people use the trails. As we hiked along the trail we found several camellia species including Camellia pitardii, fraterna and oleifera. Amazingly we found the Camellia pitardii to have a pleasant floral scent, which has not been noticed in cultivated plants of this species. Among this stone forest, our blooming camellias were growing beneath exotic trees—emmenopterys, toona, pterostyrax, sassafras tzumu and evergreen magnolias. It was a wonderland for a plant fanatic like me.

At other locations on the trip we did see more camellias, including what we think there are two distinct species in this group that some researchers merged into one. Traveling through this part of China was amazing with pockets of botanical wonder mixed with our precious camellias, making this a trip I will always remember.

Byline
David Parks owns and operates Camellia Forest Nursery in Chapel Hill. You may reach him at 919-968-0504.