If you’ve spent any time in a Triangle garden or walked in our local woodlands, you’ve seen space invaders. Invasive exotic plants are rapidly out competing native plants in our fields, forests, and waterways. 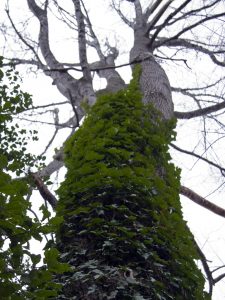 What are they?
Invasive exotic (sometimes called alien) plants are not native to the environments they invade. Because they have no natural enemies, these exotic species rapidly spread, overwhelming native ecosystems. Usually, humans introduce these plants to the regions where they become problems, either accidentally while transporting something else, or intentionally, as when we import plants from other parts of the world for our gardens. In the Triangle region, most of our space invaders are from Asia, and were imported as ornamentals.

Are weeds invasive exotic plants?
Not necessarily. A weed is generally defined as any plant in an undesired location. For example, most folks around here consider Poison Ivy (Toxicodendron radicans) to be a weed. But although this native tends to pop up where it isn’t appreciated, it belongs in our woodlands.

What can Triangle gardeners do?
Anything we gardeners can do to eradicate invasive exotic plants in our yards will not only improve the health of our home landscapes, it will remove our yards as sources from which invaders can spread into nearby remaining woodlands.
Many of our worst invaders are vines. Their extra weight makes it more likely that covered trees will break during high winds and ice storms. The leaves of the vines out compete tree leaves for sunlight. Vines also girdle young trees, or distort the trunks into shapes that prevent healthy growth.

In addition to the four invasive plants described below, Dr. Johnny Randall, assistant director for Natural Areas and Conservation at the NC Botanical Garden asks that we make strong efforts to eradicate two other invasive vines – ornamentals that are increasingly overtaking our woodlands.

They are Porcelainberry (Ampelopsis brevipedunculata) and Oriental Bittersweet (Celastrus orbiculatus). A grass, Japanese Stiltgrass (Microstegium vimineum), is difficult to control along waterways, but you can still fight it effectively in areas that don’t flood. 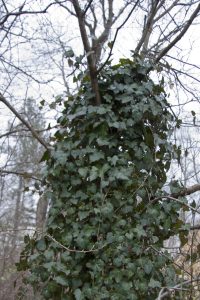 English Ivy (Hedera helix) is easy to identify by most everyone. Many homes in older neighborhoods are overrun with it. Not only does this vine spread vegetatively, its berries are favored by birds, which disperse seeds into nearby forests. When the heavy evergreen vines move into treetops, the extra weight makes the trees much more susceptible to wind and ice damage. Because this vine is evergreen, when it invades our forests it prevents adequate sunlight and rainwater from reaching wildflowers and saplings on the forest floor.

Only vertical English Ivy vines flower and fruit, so attack those first. Cut the vines and paint the ends with a 15-25% solution of glyphosate herbicide. As always, handle herbicides according to directions. Note that the fruits of English Ivy are poisonous, and sensitive individuals may experience skin irritation after touching leaves and vines. Wear gloves and other protective clothing when you attack space invaders.

To eliminate English Ivy patches on the ground, first use a weed whacker to cut off the leaves. Next, cover the area with overlapping pieces of cardboard, and then cover the cardboard with a thick layer of mulch. Pull any vines that try to poke through the mulch.

Chinese Wisteria (Wisteria sinensis) and Japanese Wisteria (Wisteria floribunda) were introduced into our country as ornamentals in the early 1800s. It’s easy to spot escaped vines in the treetops of woodlands near older neighborhoods, especially in the spring when numerous clusters of fragrant purple flowers dangle everywhere. Individual vines can live 50 years and grow as high as 65 feet. Vines kill sizeable trees through strangling and shading.

To kill vines, use the same cut-and-paint technique described for English Ivy. One application of herbicide may not be enough. Watch for resprouting. If you’re faced with a dense thicket of Wisteria, you may need to begin by spraying herbicide on the leaves. This method gives you less control, but if the thicket is dense, it’s unlikely that desirable plants will be affected. 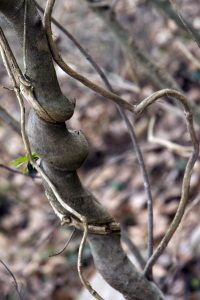 Japanese Honeysuckle (Lonicera japonica) is a woody evergreen vine so common to Triangle woodlands that even many folks born here think it’s a native. The fragrant white tubular flowers are hard to miss. Vines girdle shrubs and young trees, cutting off their flow of water and killing them. Vines can spread over every shrub and tree in their path, creating dense thickets that shade out forest floor plants. Japanese Honeysuckle spreads vegetatively and its berries are eaten by birds.

Cut and paint bigger vines climbing up trees as described previously. Smaller vines usually pull up fairly easily. If you have small vines popping up here and there, vigilant pulling will prevent invasion. You can spray the leaves with herbicide when vines are actively growing, but it’s hard to do this without hurting desirable plants. 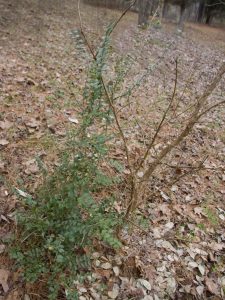 Chinese Privet (Ligustrum sinense) has become a dangerous space invader in the wetlands of North Carolina’s coastal plain, and it is rapidly overtaking our Triangle area bottomland forests. Oppositely arranged, small leaves are evergreen to semi-evergreen, and the shrubs can reach heights of 30 feet. They aggressively shade out all natives. White flower clusters in spring produce numerous purple berries that birds love.

Small plants and seedlings can be pulled out of the ground and destroyed. Cut down bigger shrubs and paint the stumps with herbicide. Cut or spray the leaves of new growth when resprouting occurs.

Byline:
Catherine Bollinger has been a Triangle gardener for over 40 years. For the past 20 years, she’s been battling invasive exotic plants on her family’s five acres in Chatham County.