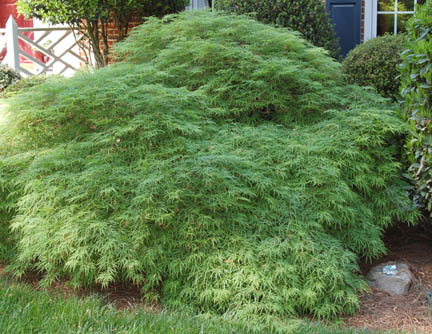 As far as under story trees, few others can approach the beauty of the Acer palmatum or Japanese maple. Although their flowers are insignificant, the leaves often have brilliant colors, usually in spring and fall.

Some have fascinating bark – bright coral coloration in winter, or extreme warts and fissures that might appeal to the more sophisticated collector. Other varieties, known as ‘cultivars’ have very fine, deeply incised leaves, which add a delicate texture to the garden.

The overall growth of Japanese maples can range from mounding and weeping to upright and broad (or narrow) to dwarf tabletop trees. The number of mutations that have been preserved in the form of cultivars number over one thousand. About 400 different cultivars can be found in the USA. 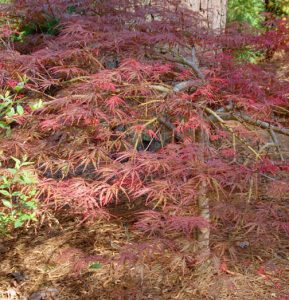 Most people are familiar with the purple broad leaf form represented well by the cultivar ‘Bloodgood’ or one of the red lace-leaf forms such as ‘Tamukeyama’, ‘Crimson Queen’ or ‘Red Dragon’. However, most home landscapes can use a few more.

I would recommend adding a green lace-leaf like ‘Viridis’, if you have a shady spot, perhaps a yellow or orange leafed variety such as ‘Orange Dream’ or ‘Katsura’. Then, try a miniature or dwarf form like ‘Murasaki kiyohime’ or ‘Shishi Yatsubusa’. Be warned though, you may become hooked! 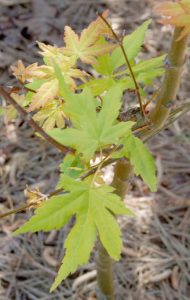 Buying a Japanese maple: The best selection is often in the spring. Having a fibrous root system, maples transplant easily. Despite common folklore, they can be planted in full sun, with the exception of the green lace-leaf variety. They will do a bit better with some shade during the day. If you have lots of shade, they will do quite well, too.

Before you purchase a Japanese maple, look carefully at the trunk and major branch structure. Since Japanese maples have opposite buds, there is a tendency for them to develop what is called a ‘crotch’. If both branches are of the same thickness, this can become a problem in an ice storm or other stressor when the tree gets larger.

Japanese maples are slow growing when they are young. They typically push out from all their buds once in the spring. There will be some secondary growth during the summer if they are ‘happy’ and their needs are being met. 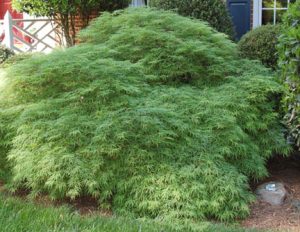 Start with a plant no smaller than a 3-gallon size. If the tree has been grown in pine bark, make sure you remove a good amount of the media when planting to allow the roots to be in contact with the soil it is going to be growing in.

As a rule, maples are grown on the dry side, however do not let them become bone dry, ever. They like consistent but not constant watering.

Most people have great success with their maples, and enjoy them immensely. They are one landscape choice that will definitely add value to your home. With proper pruning, which you can easily learn, you will have a beauty to enjoy for years.

Byline:
John Monroe is the owner of Architectural Trees, a nursery in North Durham County specializing in Japanese maples and conifers. You can reach him at archtrees@aol.com.