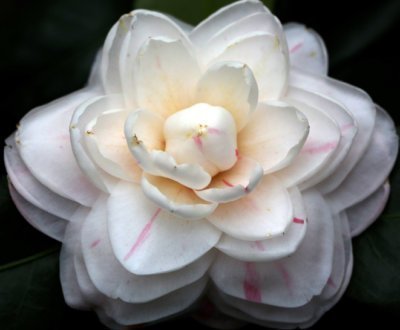 The April series of spring blooming camellias (Camellia japonica) have gained popularity since being introduced thirty years ago. Southern gardeners living in zones 6-7 have embraced these late season bloomers for their beautiful and reliable flowers. Considering the sustained cold of recents winters, cold hardy, late blooming varieties are getting more attention than ever from the local gardening community.

Bred by Dr. Clifford Parks of Chapel Hill, NC, the ten varieties in the series have proven to be the best for late spring color and cold hardiness.

Dr. Parks began his camellia breeding work in the early 1960’s in southern California while working at Descanso Gardens and Huntington Library shortly after finishing graduate school. One of his breeding objectives was cold hardiness, which was quite difficult in a climate that rarely sees temperatures below freezing. When he was hired as a botany professor at UNC Chapel Hill in the late 1960’s, he moved his family and all of his camellia hybrids across the country, where they were planted at the North Carolina Botanical Garden. He began work on his legacy of extending the geographical range for growing camellias in the United States and introducing high quality late season bloomers.

The April series cultivars were selected from thousands of hybrid seedlings after the infamous 1985 freeze, when temperatures across the Carolinas were sustained below freezing for a week. A record low of minus 9 degrees tested the cold limits of many “zone bending” taxa. Many old camellia specimens died to the ground, but these extra hardy specimens remained evergreen.

These late season camellias begin to bloom after the threat of hard frost in central North Carolina, and offer a wide variety of flower colors and forms. Below are my top five picks from the April series.

‘April Dawn’
One of the most famous late bloomers is ‘April Dawn’. This white formal double flower has dark pink to red candy stripes, which are showy into April and May. The petals are heavily stacked and have an interesting architectural pattern. Like all striped camellias, solid colored “branch sport mutations” of solid pink, red and white can be found blooming simultaneously on the same plant. ‘Stellar Sunrise’ is the solid pink sport of ‘April Dawn’. The habit is vigorous and upright. Over time, this shrub will branch out and become a dense specimen excellent for screening in a shady location. The foliage is dark glossy green and is attractive year round. Expect a size of 10 feet tall by 6 feet wide in 10 years.

‘April Remembered’
Considered to be one of the hardiest camellias in the trade, ‘April Remembered’ is Dr. Parks’ favorite. It is a vigorous plant with spreading branches. The soft pink semi-double flowers are large, and make a great show in mid spring. The ten-year size is 8 feet tall and wide. 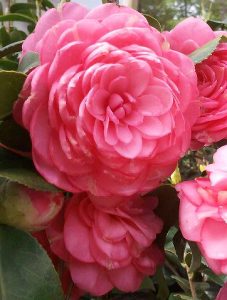 ‘April Rose’
One of the most floriferous varieties on the market, ‘April Rose’ is my favorite of the April Series. The formal double, rose pink flowers begin to open just as the warmth of spring sets in. Last year this was the last cultivar in full flower, still blooming on Memorial Day. It has proven to have great cold tolerance and is a very popular choice for gardeners in northern climates. Following the deep freeze of 1985 this was the only flower to bloom. The habit is very dense and compact growing to 8 feet tall by 6 feet wide in 10 years. The dark green glossy foliage is attractive year round, and is useful for suburban screening in gardens with morning sun exposure.

‘April Snow’
The bright white rose form double flowers are large and showy, opening late in the season. This is a well-formed plant that is somewhat slow growing with a dense, spreading habit. The leaves are quite large and are a pale green color compared to other plants in this series. The 10-year size is 6 feet tall by 4 feet wide.

‘April Tryst’
This bright red anemone flower form is often confused with the historically significant winter blooming variety ‘Professor Sargent’. The blooms are quite similar, but this variety blooms much later in the season, well after the threat of hard frosts. In many varieties, dense clusters of petaloids in the center of the flower are easily damaged by cold before the flower opens; however, this clone opens flowers of good quality after periods of very cold weather. The habit is upright and vigorous, reaching 8 feet tall by 6 feet wide in 10 years.

Byline:
Brie Arthur is the grower and propagator at Camellia Forest Nursery. In her free time she enjoys growing edibles with her husband in their one-acre suburban garden in Fuquay-Varina.