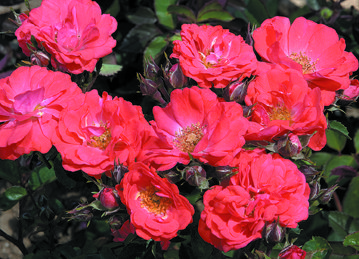 I’m on a personal mission to save the Knock Out rose although no one has noticed. Four years ago, I developed a mania for sustainable roses, an affliction that still haunts me. The one sustainable rose I failed to plant was Knock Out as I snobbishly felt it had been over planted and had little to distinguish itself.

Recently, while preparing a presentation to give to the Durham Garden Forum, I had reason to look around at many of the roses planted throughout the Triangle, causing me to reassess Knock Out. It suddenly dawned on me that Knock Out is a really nice rose—but almost always it has been the victim of what I can only describe as rose abuse.

Until the twentieth century, gardeners had a lovely relationship with roses, as they required little special attention. It was in the twentieth century that the hybrid teas, the prima donnas of the rose world, gained ascendancy. No longer were roses incorporated into the garden but instead they were shunted off into a sunny corner, usually placed in two even rows, where they could be sprayed and pampered. After a century of fussing over hybrid teas, gardeners were ready for something else—and this is where the introduction of Knock Out enters the story.

Timing is everything. In 2000 Knock Out electrified the gardening world. Due to its thick epidermis, Knock Out was virtually immune to black spot, a fungal disease that decimates the hybrid teas. Up to this point, ‘Peace’, introduced in 1946, had been the all-time best-selling rose, but Knock Out quickly outpaced it. Today it’s the best-selling rose in history and therein begins a story of what I can only call misplanting.

Knock Out has become the new Bradford pear: it is everywhere. Specimens struggle in suburban shopping centers where they have to brave the unrelenting heat and sun with no respite. Building contractors and commercial landscapers have taken up the Knock Out bandwagon so we see groupings of five or seven Knock Outs in front of commercial buildings and apartments. What you get is a blaze of color—and no sense of the individual blooms.

Roses are not azaleas. We should not plant roses as though they were azaleas, which delight us for the moment until our eyes become saturated and it’s time to move on. Azaleas by their very nature are not very interesting plants while rose varieties have individual characteristics, which should be savored.

Because of the demands of the fussy hybrid teas, we have to group them together, but sustainable roses, such as Knock Out, should be incorporated individually into the perennial garden as they have much to offer. It is easy to feast one’s eyes on one or two Knock Outs but it’s impossible to distinguish individual roses when the shrubs are massed together. Knock Out, when treated correctly, has a pleasing shape that requires very little in maintenance.

I’d like to see Knock Outs situated where the individual shrubs can be a focal point. Go with a single specimen rather than a grouping of five or seven. Protect it if possible from the late afternoon summer sun, give it well-draining decent soil, and a small dose of a slow release fertilizer at the beginning of the growing season.

Should your Knock Out develop a sign of black spot, don’t panic, as it will not decimate this rose. This fungal disease needs eight hours of moisture on the leaves in order to develop. Simply water the roots in the morning, which gives the leaves a chance to dry and never use an overhead sprinkler.

If you do all this, you will have a rose that looks and acts like a rose—and not as an azalea.
—
A serious gardener for the past twenty years, Kit Flynn resides in Chapel Hill. She is also a Durham Master Gardener.